The construction debt is earmarked for phase one of what will be a $5.5 billion, 18-million-square-foot, master-planned mixed-use development led by the founder of Under Armour 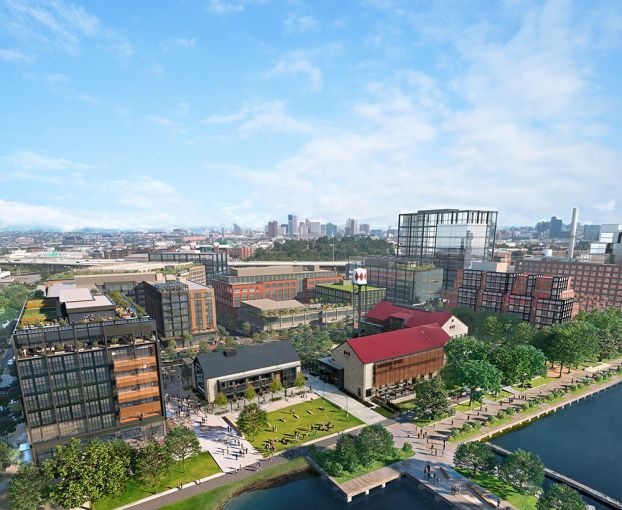 A rendering of the Port Covington development. Image: Sagamore

Bank OZK has provided $189 million in construction debt to help fund the first phase of construction on the $5.5 billion Port Covington waterfront development in Baltimore, Commercial Observer has learned.

The four-year construction loan was provided to sponsors Sagamore Ventures and Goldman Sachs Urban Investment Group and their development partner Weller Development Company for Chapter 1B, the first phase of the construction, which is scheduled to wrap and be delivered by the end of next year, according to information from advisory firm JLL.

JLL Capital Markets’ Steve Collins led a team out of Washington, D.C., that represented the borrowing party in arranging the debt financing.

Bank OZK confirmed the loan, but declined to comment on details of the financing or the development.

Sagamore Ventures is a venture capital arm of Plank Industries, which is a real estate investment and development firm started by Under Armour Founder and CEO Kevin Plank.

The developers, led by lead investor Sagamore, will utilize Bank OZK’s loan, as well as a $138 million piece of a larger $660 million bundle of Tax Increment Financing (TIF) issued by the city of Baltimore to build-out the first phase, which will see an ample amount of affordable housing delivered to the area. Plank, who began assembling parcels for the development five years ago, has previously said he wants to transform the area into a “mini city,” according to a January report from The Baltimore Sun. The $660 million TIF package is the largest in the city’s history. (TIF is a public subsidy used by local municipalities for infrastructure development or redevelopment projects to help spur economic growth, relying on future tax revenue generated by the developments to pay for the subsidies.)

The TIF financing was approved by the city in 2016, and a year later, Goldman paid $233 million to become an equity partner in the project, according to The Baltimore Sun.

The first phase of development will include the construction of five buildings and will supposedly cost around $500 million, according to the Sun. The developers had initially broken ground on it in late 2019, only to be stymied by the pandemic. They halted construction in April 2020 due to safety precautions.

Whiting-Turning Contracting Co. is also involved in the construction, alongside Weller, per the Sun.

Located in metro Baltimore’s Riverside neighborhood, the waterfront project will span 235 acres, and Plank’s Under Armour — founded in D.C. in the mid-1990s — will anchor the development with a new corporate campus there. The sports equipment and apparel company already has an office and a manufacturing facility in Port Covington, as well as a headquarters building in the adjacent Locust Point neighborhood, per the Sun.

Altogether, when complete, the project, which is one of the largest urban redevelopment undertakings in the country, will feature a mix of office, retail, mixed-income residential, hospitality, 40 acres of public park and green spaces, and about three miles of restored waterfront and marinas, among a variety of other supplemental developments. The Baltimore Sun also calls Port Covington its home for its newsroom and printing facility via a long-term lease with the developers, according to its own reporting. Originally built in 1904, Port Covington first served as a large marine terminal for the Western Maryland Railway before the newspaper built its printing plant in the early 1990s.

“The team and many stakeholders across the city and in the community have worked tirelessly for a long, long time to get to this point, and we are so proud to have reached this important milestone together,” Weller Development Founding Partner, Marc Weller, said in a statement. “The momentum continues for Port Covington, and we look forward to great things ahead for the entire City and our South Baltimore neighbors.”

JLL’s Collins said in a statement that his group has been “impressed by the vision and efforts put forth by the Port Covington team, who have been remarkable. The sponsors and Weller Development have an ambitious goal and infectious attitude for changing the landscape in Baltimore.”

“[We have] believed in the project since day one and have eagerly supported the team‘s vision with our world-class capital markets and commercial leasing capabilities,” he added. “We are excited and honored to be a small part of this big step for the city of Baltimore.”