The Trump Organization made Gucci an offer it, apparently, couldn’t refuse 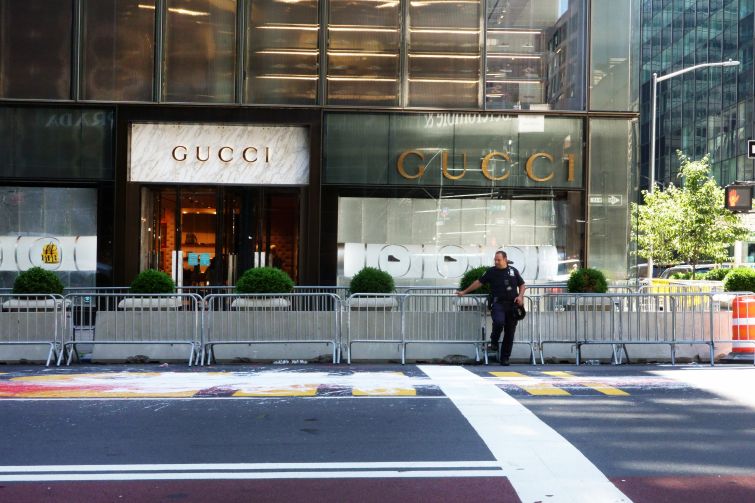 Gucci opted to extend the lease for its 50,000-square-foot Trump Tower flagship store despite Trump's increasingly toxic brand. This image, taken in the summer of 2020, shows a Black Lives Matter mural painted in front of the building, which took on a symbolic status during Trump's presidency. Photo by: Joan Slatkin/Education Images/Universal Images Group via Getty Images

When luxury fashion retailer Gucci decided to renew the lease for its 49,000-square-foot flagship store in Trump Tower, some in the fashion industry were surprised that the brand would stay in the building after it has tried to promote a more progressive and racially inclusive image.

The deal, which The New York Times first reported this week, involved Gucci extending its lease in the 58-story condo tower beyond its original expiration date of 2026. The retailer signed the 20-year lease for the store at 725 Fifth Avenue, between East 56th and East 57th streets, in 2006.

By 2012, its base rent was $384 a square foot, amounting to $18.7 million annually, according to a Securities & Exchange Commission filing, with maximum rent increases of 10.5 percent every three years. Fifth Avenue between 49th and 59th streets is, far and away, New York City’s most expensive retail corridor, where retail asking rents averaged $2,618 per square foot last fall, according to the Real Estate Board of New York’s most recent retail report.

The high fashion brand has run into a few racial controversies during the Trump administration. In 2017, it faced criticism for unveiling a jacket that was nearly identical to a 1980s design by Harlem clothier Dapper Dan. Then, in 2019, the company decided to pull an $890 sweater that resembled blackface from store shelves. After that incident, it hired Major League Baseball executive Renée Tirado to serve as its chief diversity officer. The company also launched a diversity and environmental initiative called Gucci Equilibrium.

Gucci parent company Kering “likes to say that they have these ideals about promoting women’s rights and Black rights, but they put those ideals aside if they can make a deal,” said a source familiar with the lease, who requested anonymity to protect their business. The person pointed out that Asian sales account for 38 percent of Gucci’s revenue, and that Black customers drive a significant chunk of Gucci sales in America.

“One of the people internally at Gucci told me that of all the landlords they dealt with during the pandemic, Trump was the nicest,” said the source. “In return, [Gucci] had to do something for them. Prior to that moment, they were looking on Fifth Avenue for a new location. Once COVID hit, they pretty much stopped that conversation all together.”

Kering, which is publicly traded in Europe and based in Paris, is likely eyeing its bottom line after seeing a $160 million decline in net income last year, and a 23 percent decline in revenue for Gucci, one of its most profitable brands.

The retailer’s decision comes in the wake of another high-profile departure from Trump’s 57th Street properties. Tiffany & Co. decided to leave its 74,000-square-foot store at 6 East 57th Street, Bloomberg reported last week, and move back to its under-construction flagship store at 727 Fifth Avenue in mid-2022. The previous tenant in Tiffany’s space was NikeTown, which departed in 2017 for a new, 70,000-square-foot store at SL Green Realty Corp. and Wharton Properties’ 650 Fifth Avenue.

Retail consultant Kate Newlin noted that the Trump Organization was likely desperate to keep Gucci in place, particularly, if it plans to sell off the 238-unit, residential-and-retail property in the near future. The former president is personally on the hook for more than $420 million in loans that are due within the next few years. Meanwhile, in no small part, due to his performance in the White House, the Trump Organization’s revenues have dropped sharply as of late — down by nearly 38 percent in 2020, to $278 million.

“If they’re gonna try to sell the Trump Organization in parts, those parts need to be fully rented,” Newlin said.

She added that while the Trump brand is “toxic, it’s going to be less demented in the near term. Gucci has weathered the horror storm, and he’s receding from scrutiny at the moment. If they’ve stuck with him thus far, they’re getting concessions, and there could be a change in ownership that would cause the Trump name to come down.”

Newlin also noted that ultra-rich people often don’t shop in person at all, instead, relying on personal shoppers and retail consultants who essentially bring the store to their homes. And record-low tourism numbers in New York City during the pandemic have meant very few people shopping in stores on Fifth Avenue. Also, with low foot traffic at the brick-and-mortar store, the negative impact of being in Trump Tower may not matter much to Gucci or to its shoppers.

“People that didn’t draw the line two years ago are not going to draw the line at shopping at the Gucci in Trump Tower next year,” the consultant explained. The Trumps “are giving it away in order not to lose Gucci, and Gucci has decided that nobody who cares about the toxicity of the Trump brand shops at Gucci.”