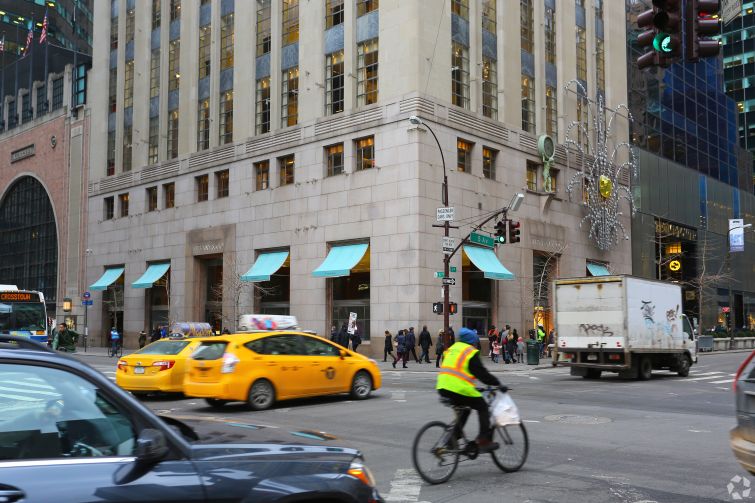 Tiffany & Co. has announced that it will completely renovate its Fifth Avenue flagship store starting in spring 2019, and will temporarily expand its retail operation into Nike‘s digs next door.

The 181-year-old jeweler giant owns the 10-story, 124,000-square-foot building at 727 Fifth Avenue at East 57th Street that houses the 45,000-square-foot store (on five floors including the mezzanine) and offices. During the three-year renovation, Tiffany will occupy all of Nike’s 73,350-square-foot space at the adjacent 6 East 57th Street via a sublease, as per a release, a company spokesman and a spokeswoman for CBRE. The space spans six floors and a basement, the CBRE spokeswoman said.

“Technically [the deal] is a sublease between Nike and Tiffany,” the CBRE spokeswoman emailed. “[Jeff] Sutton and [SL Green Realty Corp.] were responsible for the space and the ones that negotiated it on behalf of Nike as part of the deal for Nike to move to their building” at 650 Fifth Avenue. The building is owned by the Trump Organization.

CBRE’s Andrew Goldberg and Annette Healey represented Tiffany in the sublease, a CBRE spokeswoman confirmed, and SL Green handled the deal in-house. The CBRE spokeswoman said the brokers couldn’t comment as Goldberg was away, and an SL Green spokesman declined to comment.

Tiffany’s spokesman said the company’s renovation news is being driven by the sublease at Niketown becoming public, and he declined to provide further details.

Tiffany’s flagship location, open since 1940, “accounts for as much as 10 percent of the retailer’s annual sales,” per Bloomberg,  and the renovation will cost “as much as $250 million,” the publication calculated.

“We are extremely excited about the opportunity to transform our iconic New York flagship store and create a dramatic new experience for customers,” Alessandro Bogliolo, the CEO of Tiffany & Co., said in prepared remarks. “Innovation will remain at the forefront of Tiffany’s plans for 727 Fifth Avenue, and the newly reimagined flagship will serve as the modern crown jewel of our global store network.”

Commercial Observer reported last year that Tiffany, which operates more than 300 Tiffany & Co., retail stores worldwide, was beset by issues from its flagship store’s proximity to Trump Tower, to the company CEO stepping down after less than two years to its lack of appeal to millennials to the uptick in online shopping.

Updated: This story has been edited to include sublease details at 6 East 57th Street.