How Two Israeli Newspaper Reporters Started Their Own Architecture Firm 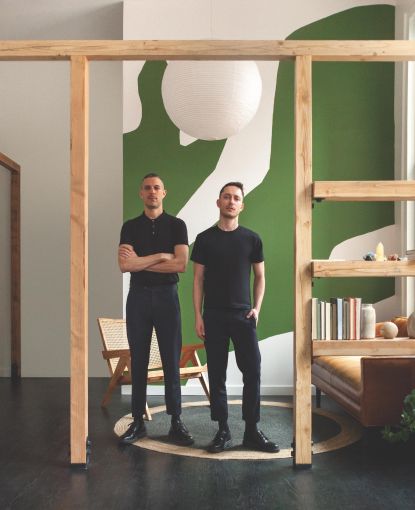 Noam Dvir and Daniel Rauchwerger, who started dating while working as architecture and arts reporters at Haaretz more than a decade ago, recently started their own architecture firm, BoND. Image: BoND

Noam Dvir and Daniel Rauchwerger took an unconventional path to owning their own architecture and design practice — through journalism.

Now partners in life and business, the pair met when they were working as arts and architecture correspondents for the Israeli newspaper Haaretz. Although they had noticed each other’s bylines in the paper for months, they finally met in person at a staff brunch in 2009. They hit it off and began dating. Both happened to be from Tel Aviv and studying architecture while writing for the paper.

Rauchwerger, then 22, covered fine arts events during his summer breaks and in his free time. “Architecture and journalism kind of fell onto my lap in a way,” he said. “And I grew up in a family that was very close to the art scene in Israel,” which, along with his academic writing, was the reason Haaretz approached Rauchwerger to write about art.

Dvir, who was 27, had been at Haaretz for a year by the time the two met. He’d gotten into journalism by doing his mandatory military service at an Israeli army radio station that handled national news.

“It was the best journalism school,” Dvir said. “By the time I finished, I had offers to work in television. At 21, I became a producer for a show that’s a bit like 60 Minutes in Israel.”

He would work when the show was in season and study architecture when it wasn’t shooting. Then, Time Out Tel Aviv hired him to write an architecture and urban design column. After six months, Haaretz asked him to come on as a staff writer covering architecture.

“What’s special about Israel is that architecture is very political,” he said. “Any building, any new plan, there’s always a political impact that goes beyond urban renewal or improvement. So I started reporting architecture as news, and it was really a gold mine, because there’s so much you can do. The newspaper loved the stories I wrote, and a lot of it was about money and architecture, privilege. A lot of it was about planning and kind of looking at different communities that are affected by it — sometimes it would be Palestinians.”

After interviewing a number of the world’s top starchitects, he realized that he wanted to practice architecture. And once he and Rauchwerger had been dating for a year, the pair decided they would get their master’s degrees in architecture at the Harvard Graduate School of Design.

They moved to Cambridge in 2010, earned their degrees, then moved to New York, where they worked together at Rem Koolhaas’ Office of Metropolitan Architecture. Dvir worked on large mixed-use towers in Tokyo and Vancouver, while Rauchwerger designed high-profile exhibitions for major museums like the Metropolitan Museum of Art.

Ultimately, Dvir left OMA to help build a stillborn “Cities Division” at WeWork. The endeavor lasted eight months before the coworking giant buckled amid a failed attempt at an initial public offering. When he found himself laid off in October 2019, Dvir decided to take a stab at his longtime dream of building an architecture firm with his husband and best friend. Rauchwerger left OMA that summer to work at Rapt Studio, and helped build the business in his off-hours.

In January 2020, just before the pandemic began, Dvir, 38, and Rauchwerger, 33, founded their own design firm, BoND (short for Bureau of Noam and Daniel). Operating out of their newly designed Chelsea loft, the couple reached out to their social circle and found work surprisingly quickly.

Hair stylist Garrett Bryant had recently moved his salon, Hawthorne, into a larger space on West 23rd Street in Chelsea. Dvir and Rauchwerger asked if he wanted help designing and laying out the new studio, which occupies 1,000 feet on the entire third floor of an old loft building.

“I had a very clear vision of how I wanted the space to be laid out, and they helped guide me and bring some elements of design to the table,” Bryant said. “They were good at interpreting my vision and helping edit me down — just because I like something doesn’t mean it will fit with the whole design. They really took my vision, brought it to life, took it even further, as far as adding more elements to make it even more personal.”

Adding a wood divider made of Douglas fir, midcentury modern furniture, and rounded mirrors helped give the space a warm, laid-back feel, he said.

“We’re trying to get away from hair salons where they’re more fast-paced and they have a front desk,” Bryant said. “Everyone who works there is an independent contractor. They handle their own scheduling, their own clients. Clients really are getting a more intimate, personalized experience.”

The salon opened on Feb. 1, six weeks before Gov. Cuomo imposed coronavirus lockdown restrictions on New York City that shut down most businesses, including salons. Fortunately, the already spacious layout of the styling stations — there are six in the entire space — made it easy to distance once the salon reopened in late June.

Bryant said he’d known Dvir and Rauchwerger for about five years, but had never worked with them until they collaborated on his Hawthorne space.

“They’re both very serious about design and have very strong convictions about what their vision is,” said Bryant. “But they still have personalities and a sense of humor. I don’t think they take themselves too seriously, even with how passionate they are about what they do.”

Rauchwerger explained that they want to work with as many gay and queer clients as possible, like Bryant, whom they met on Fire Island years ago.

“A lot of our clients are gay and queer, and it’s something that we cared deeply about,” he said. “And to invite as many people from our community as possible [to participate] in the design process through different collaborations. We joined this community in New York and, basically, have grown in it.”

Besides Hawthorne, the pair also worked on the new Midtown offices for Swiss energy company Axpo, a home in the Hamptons, and a short-term retail installation for a collaboration between streetwear brand Kith and BMW.

Rob Mammone, a managing director at experiential marketing firm satis&fy, worked with Rauchwerger and Dvir to design the space, which was located at Kith’s new offices in 25 Kent in Brooklyn. The installation, which opened for a week in October, showcased a BMW-inspired apparel line and a limited edition BMW M4 car designed by Kith. The couple came up with the idea to create a series of white walls with M-shaped cut-outs to help guide people through the space, which displayed the history of the M series vehicles with different objects that BMW provided.

“They are fantastic,” Mammone said. “Making recommendations about materials and colors, opening up their personal book for permitting and different people in their network. My wife and I recently purchased a home and we were seriously considering the guys to design the bedroom.

“Some architects are too high on themselves and unable to flex, and are difficult to work with,” he added. “They have a strong point of view and command a room, and earn the right to have their opinion, but they’re flexible enough to understand limitations on budget and space.”