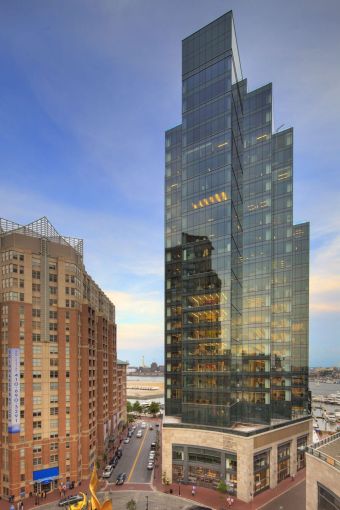 The company, which occupies approximately 30,000 square feet on the 20th and 21st floors, renewed for another 10 years. The rent was not disclosed.

“We are delighted to retain Hogan Lovells on behalf of the neighborhood as well as Baltimore City,” Tim O’Donald, Harbor East Management Group’s president, said in a statement. “Their long-term commitment to the district is a testament to the continued vitality of the area and the distinct sense of place which Harbor East provides. It is tremendously encouraging and telling that such a prominent firm continues to recognize Harbor East and the greater downtown region of Baltimore City as a preferred place to conduct business.”

Located at 100 International Drive, the building was built in 2009 to serve as the headquarters of Legg Mason. It’s situated in Baltimore’s Inner Harbor, overlooking Harbor East Marina.

The surrounding Harbor East is a 5.5 million-square-foot waterfront development that is home to numerous retail, dining, entertainment and hotel options.

“Hogan Lovells has been strongly committed to Baltimore City and the Baltimore business community for over 30 years,” Steven Barley, managing partner of the firm’s Baltimore office, said. “We look forward to continuing that commitment with our lease extension. Harbor East offers an unparalleled location from which to serve our clients and provides an ideal working environment for our employees.”

Other companies in the building include Johns Hopkins Carey Business School, Medifast and OneMain Financial. The building also has retail tenants on the ground floor, with notable tenants J.Crew and Under Armour Brand House.

The LEED Silver, Class A office building is part of a larger complex, which includes the Four Seasons Hotel Baltimore, and private residences directly to the west, and an underground parking garage that spans the entire site.

Another law firm, Gordon Feinblatt, will soon be relocating its headquarters to the neighborhood, signing a 35,000-square-foot lease at 1001 Fleet Street, again with Harbor East Management Group.