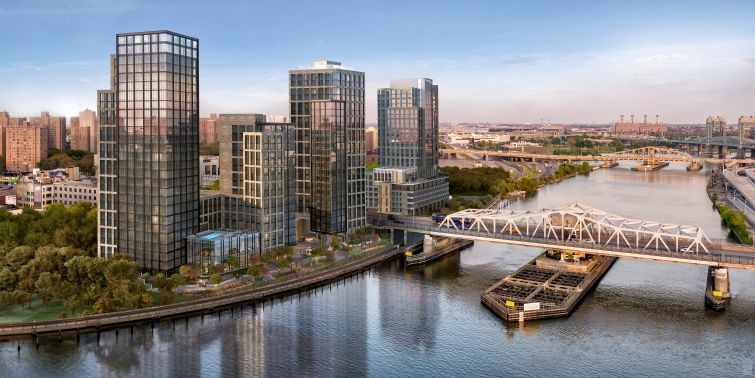 Brookfield is in the midst of building Bankside, its two-phase South Bronx megaproject on the waterfront. Rendering: Brookfield Properties

Brookfield Properties has closed on a $190 million loan from Goldman Sachs for a massive development on the South Bronx waterfront, Commercial Observer has learned.

The financing includes a $140 million construction loan for two sites in Mott Haven, spanning 4.3 acres on either side of the Third Avenue Bridge. The loan will replace an existing $96 million mortgage from HSBC, originated in 2018 when Brookfield first purchased the properties.

Brookfield purchased the sites, formerly an industrial factory known as JL Mott Iron Works, from the Chetrit Group and Somerset Partners for $165 million with plans for a massive housing and mixed-use development in place. The proposal included seven buildings with 1,350 apartments, and a new park on the Harlem River, spanning both sides of the Third Avenue Bridge.

Designed by Hills West Architects, the first phase of the project, called Bankside, will bring 458 apartments to the north side of the bridge at 2401 Third Avenue, including two 25-story towers and one 17-story tower. The second phase, with 921 units, will be constructed to the south of the bridge at 101 Lincoln Avenue.

As of the third quarter of 2020, the first phase was well underway with the superstructure of two of the three towers completed, and excavation and remediation had started on the second phase, as CO previously reported.