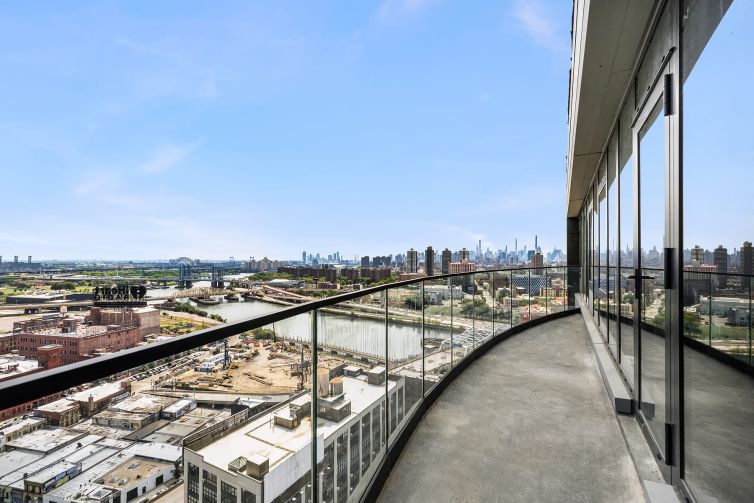 A view of the industrial South Bronx waterfront from the balcony of the newly completed Arches, a two-tower residential project in the Port Morris section of the South Bronx. Image: EXR Realty

While parts of the South Bronx are getting Williamsburg-style waterfront towers, other sites in the area may remain undeveloped as the city recovers from the coronavirus pandemic.

A swath of industrial Port Morris and Mott Haven between Bruckner Boulevard and the Harlem River waterfront was rezoned under Mayor Michael Bloomberg in 2005. Then parts of Morris and Walton avenues were rezoned for residential development in 2009, setting the stage for another wave of projects that are in the pipeline on the west side of the neighborhood.

The narrow strip of warehouses near the Harlem River Yards has slowly given way to tall residential towers. The largest of the projects under construction there is Brookfield Properties’ Bankside, which will bring nearly 1,400 apartments and seven conjoined high-rises to the waterfront.

The first phase is well underway at 2401 Third Avenue. The superstructure for two out of three towers has been completed, and the third is expected to top out by the end of the year. Phase 1 includes 458 units across one building with three towers rising 25, 25 and 17 stories. Excavation and remediation have begun on Phase 2 next door at 101 Lincoln Avenue, which will include 921 units. The development will also have 15,000 square feet of retail and 34,000 square feet of public waterfront space.

Realizing that its project may be controversial, Brookfield has “tried to make sure that we take a quieter approach,” said Charlie Howe, the company’s project manager for Bankside. “We are delivering what we think is an important product for the city—housing, shoreline stabilization, environmental remediation. And this is an established neighborhood. We’ve tried to be proactive about reaching out to our future neighbors, reaching out to NYCHA [tenants] and talking to some of our existing neighbors.”

Howe said that Brookfield had teamed up with Danny Meyer’s Union Square Hospitality Group and produce delivery service Imperfect Foods to deliver produce and meals to 125,000 families in the area during the COVID-19 pandemic.

And the first phase of another new development, the Arches, was just completed a block away at 228 East 135th Street. The first of two 25-story high-rises will be completed this month, and brokers at EXR Realty have just begun leasing up the project’s 430 apartments. Thirty percent of the development, or 129 apartments, will be income-restricted and rented through the city housing lottery. Rents for the market-rate apartments start at $2,108 for studios, $2,300 for one-bedrooms and $3,094 for two-bedrooms. Many of the units have private balconies, and the building will have two gyms, in-house drycleaning service, a communal roof deck, a laundry room and programmed amenity areas with fitness classes.

The luxury leasing market is tough anywhere for residential landlords and developers, and the South Bronx is no exception. That’s due largely to the pandemic, which has spurred many wealthier New Yorkers to leave the city or renew their current leases instead of moving.

And the industrial South Bronx waterfront doesn’t yet have the critical capacity of supermarkets, coffee shops and restaurants that higher-paying renters usually look for, though some of those businesses have begun to crop up over the past few years.

EXR’s Arch Rowan said his team had rented about 20 apartments in 228 East 135th since a soft launch of the building last month with a billboard on the Bruckner, listings on StreetEasy and a few articles in real estate publications. He said that they had gotten “a lot of interest” from people who already live in the Bronx and were looking for new construction rentals. But most interested tenants were “not pulling the trigger for the end of the month in August.

“We’re getting a lot of queries for Oct. 1 or even Oct. 15,” Rowan said. “Citywide I’m not seeing a ton of movement on the higher end [of the rental market].”

Rowan said EXR plans to entice people into signing by offering a month to six weeks of free rent. He said he hopes people living in Upper Manhattan might want slightly more affordable space in a newer building.

“Compared to a building in Manhattan, we’re a much more affordable option,” Rowan said. “We’ve seen a lot of people who used to live on the Upper East Side or Harlem, who are like, ‘Hey, I have a nicer unit, I’m paying a little bit less, and I’m staying home a lot more than I used to.’”

Other new buildings in the neighborhood include The Crescendo, a six-story, 190-unit rental project at 25 Bruckner Boulevard. It was completed two years ago by the same developers that converted the adjacent Clocktower Building to loft rentals nearly a decade ago. The 12-story, 91-unit Bridgeline was finished at 329 East 132nd Street around the same time.

On the condo side, there’s the Joinery, a 47-unit building at 225 East 138th Street that Tahoe Development completed in 2018.

There are also a number of large residential developments that are either in the planning stages or in early construction. Domain Companies bought two sites at 414 and 445 Gerard Avenue last year for $38.5 million. It hopes to build a 429,000-square-foot, mixed-use project there. Similarly, Lightstone is looking for financing to build 2,000 rental apartments at 399 and 355 Exterior Street, which it purchased for $59 million in early 2019.

“You’re going to have 5,000, 6,000 units that are coming to market, built in phases for the next five to 10 years,” said Jason Gold, an investment sales broker at Ariel Property Advisors who specializes in the Bronx. “Now is a good time for a lot of these developers to build. When the market comes back, they’ll have a finished project ready for leasing.”

Even with the rosier outlook, however, Gold said it’s challenging to rent out luxury apartments in the South Bronx right now.

“I think it’s tough to rent apartments in Tribeca,” Gold said. “I think it’s just a tough market. Every landlord, even in core Manhattan, is giving reductions in rent, whether it’s 10 percent or 50 percent.”

Plus, builders are still on the hunt for development sites in the area (see our story page 34).

“There’s been an uptick in activity for development sites during COVID,” the broker noted. “We have signed contracts and closed [on sales for] about a dozen sites.”

He added that investment sales prices have come down from their peak of the past few years, but development sites haven’t seen the dramatic decreases in value that multifamily rental buildings have experienced over the past year. Sites in prime areas of the South Bronx are trading around $125 or $130 a buildable square foot, while elsewhere in the neighborhood they’re going for $75 to $80 a square foot.

Meanwhile, developers are looking for ways to invest that may require less capital than purchasing a property outright. “We’ve seen a lot of interest in ground leases,” Gold said. “It’s lucrative for the current owner of the property, and the developer gets to come in, they don’t have to put as much capital down on the property.”

Ultimately, Gold and others struck an optimistic note about developers continuing to invest in residential development in the South Bronx.