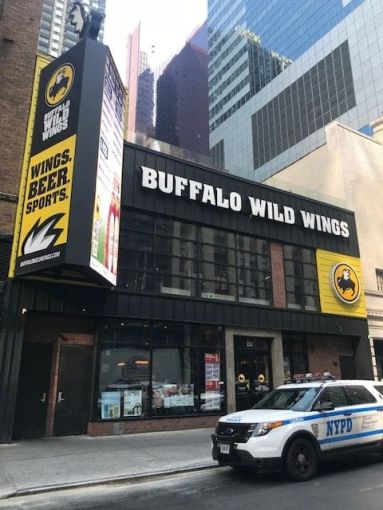 Buffalo Wild Wings is feeling the heat at its Times Square outpost, and not just from the wings.

A franchisee of the restaurant chain was sued by its landlord, Friedland Properties, after it allegedly skipped out on $3 million in rent and other fees for its 15,000-square-foot space at 253 West 47th Street, court records show.

Buffalo Wild Wings — which has temporarily shuttered due to the coronavirus pandemic — stopped paying its nearly $102,000 monthly rent bill for the spot in July 2019, according to the suit filed in Manhattan Supreme Court on Monday.

As a result, the eatery has been hit with about $325,000 in late fees and Friedland terminated Buffalo Wild Wings’ lease — which it first signed in 2013 — in October, according to the suit. The suit was first reported by Crain’s New York Business.

Rosenberg & Estis’ Deborah Ringel, Friedland’s lawyer, did not respond to a request for comment. A spokesperson for Buffalo Wild Wings deferred comment to the franchise group, Four M Capital, which declined to comment.

While Buffalo Wild Wings fell behind on the rent way before the coronavirus pandemic hit, it joins a growing number of Times Square chains being taken to court for skipping out on rent.

Paramount Leasehold filed a lawsuit against the Hard Rock Cafe last month for $6.5 million in unpaid rent at its Times Square outpost, Crain’s reported. In October, Vornado Realty Trust filed a suit against Planet Hollywood for $5.5 million in back rent at 1540 Broadway, according to Crain’s.