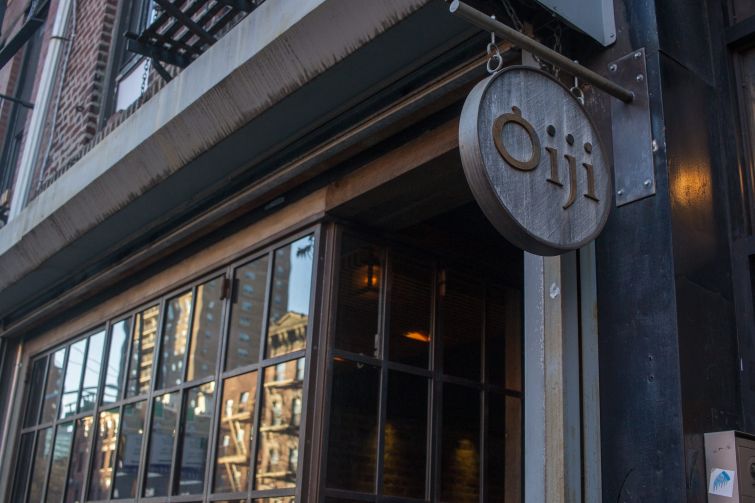 Brian Kim, chef and owner at the East Village Korean restaurant Oiji, was facing a now-typical restaurateurs dilemma as the COVID crisis worsened this past spring. Several months of a closed business left him in dire financial straits, and he had been preparing to open a second restaurant that he’d already spent almost $1 million developing. Everything was in limbo, and he was scared.

“It was a nightmare,” Kim told Commercial Observer. “I mean, I’m laughing right now, but it was a nightmare for a couple of months. I couldn’t sleep at all. Every night.”

The reason Kim can breathe easier these days is that his landlords were flexible in both cases, agreeing to lease modifications that alleviated the financial pressure.

With the COVID-19 pandemic devastating New York’s culinary customer base, the struggle has been real for restaurants pining for creative ways to keep the rent paid. And with winter closing the lid on outdoor dining, and the next wave of the disease scuttling indoor plans, the crisis will be growing ever-more dire for restaurants around the city.

As a result, retail landlords have had a choice: cut a deal to give restaurant tenants some sort of break in the rent, or evict them and watch the space gather dust — both literally and financially — until the eventual end of this crisis or beyond.

Smartly, many have chosen to be flexible.

“The only restaurateurs that are probably paying full rent now are some of the fast-casual restaurants or some of the national restaurants,” said David Firestein, managing partner at SCG Retail. “The vast majority of landlords are working with their restaurant tenants: deferring or abating rent, or going to some kind of percentage or lower rent. Most of that’s being done for short periods of time, six months or a year, trying to keep people afloat until we come out of this. It’s not in a landlord’s interest, particularly with the restaurateurs that were good tenants pre-COVID, to drive them out of business.”

In Kim’s case, a shutdown throughout March and April led to him asking his landlord for a 50 percent decrease in rent for May. To his relief, the landlord agreed.

“We had a good relationship with the landlord for like five, six years, so I just asked him for a favor,” said Kim. “I asked him for a 50 percent discount, and he agreed, and we decided to see [how things went] month by month [from there].”

Kim and his landlord did exactly that. After Kim received federal Paycheck Protection Program funds in May, he wound up paying his full rent from June through August. By then, the PPP money had run out.

Jared Epstein is a principal at Aurora Capital Associates, whose Meatpacking District restaurant tenants include Pastis, Catch, STK Steakhouse and RH Rooftop Restaurant. Epstein agrees that, for the right tenants, patience is not just a virtue, but a necessity.

“We’ve given partial abatements and partial deferrals — it depends on the relationship we have with the operator and their performance in the space in terms of paying rent and paying it on time. Being a good tenant, basically,” said Epstein. “If they’re a good tenant and we have a good relationship with them, we try to do as much as we can.”

Not every landlord has been as forgiving, a move some see as foolhardy.

“Unfortunately, we’re seeing some landlords take the position of, ‘You have a lease. Pay your rent or leave,’” said Pierre Debbas, a founding partner at real estate law firm Romer Debbas LLP, which represents non-chain restaurants throughout the city.

“That’s why you’re seeing a lot of restaurants go under now, which, in my opinion, is absolutely mind-blowing, because how many years is that space going to remain vacant for? If I called you and said, ‘Hey, let’s get a couple of guys to all put in a hundred grand and open a restaurant next week,’ you’d have to be the dumbest person in the world to think you’re gonna start a restaurant in New York City right now, in the middle of a pandemic with no end in sight. So, landlords who are rational and have some grip on reality are working with tenants,” Debbas added.

Some landlords have gone even further than that. Firestein is both a broker and a landlord. In the latter role, for restaurants in Westchester County, he has gone beyond the norm to help his restaurant tenants stay in business.

“What I’ve done with my smaller restaurant tenants is, on a monthly basis, I’m buying thousands of dollars in gift cards from them and giving them out to agencies or people that need help,” he said. “I’m helping two groups at the same time. You give a gift card to somebody, they use it in the restaurant, hopefully they spend some additional money. I don’t think I’m the only landlord doing that. It’s a way to get tenants some cash and, at the same time, help promote their business.”

The terms of renegotiated leases depend on many factors, including the restaurants’ pre-COVID profitability. Epstein, with some top-grossing Meatpacking District restaurants at his properties, has dealt with some by giving partial rent deferrals. While deferrals could be seen as a trap, as the rent accumulates to levels that could be impossible to pay off while the pandemic is still raging, Epstein has used this for venues that can manage the financial heft.

“It depends on the operator and the establishment,” said Epstein. “For our tenants in the Meatpacking District, you’re talking about Catch, which was doing $30 million in revenue prior to the pandemic, and Pastis, which was on track to do $20 million in revenue. Their rent, as a proportion of their sales, is a very healthy number. So, to carry an additional load based on the deferral that will eventually be paid back is not as concerning to them as [it would be for] a restaurant that didn’t have a healthy sales volume to rent ratio. So long as people come back to Manhattan, they’ll be able to pay it back.”

Still, many landlords are failing to see the forest for the trees when it comes to the pandemic’s long-term effects. The SoHo cafe west~bourne closed its doors in September after months of negotiations with its landlord. Keith Durst is the founder of FOC, a strategic advisory firm focused on the hospitality industry. Durst, along with partner Todd Birnbaum, said he negotiated on west~bourne’s behalf for months, but was unable to reach an accommodation that satisfied both parties.

Durst tried to arrange a deal where west~bourne would pay a percentage of sales as rent — somewhere between 7 and 10 percent — until the city allowed 50 percent occupancy for indoor dining.

“We tried to explain how we can come up with different ways to give percentage rents or do different things, but the landlord refused,” Durst said. “That landlord wasn’t willing to accept a percentage of sales. They absolutely wanted a base rent number that would have exceeded the percentage rent by such a degree that it would have increased the losses at the time.”

Durst said that he has executed similar deals on behalf of other restaurant clients, including where rent was a percentage of the normal base rent compared to the percentage of indoor capacity allowed by law.

“With some restaurant groups, [we did deals where] 25 percent of base rent perhaps would be paid now, plus a natural break point, which should be an overage based on a percentage of sales moving forward,” he said.

“For one restaurant in Rockefeller Center, we renegotiated a lease where, for the next 12 months, the rent is going to be based off of 10 percent of the gross monthly revenue,” he said. “So, if the restaurant has $100,000 in sales that month, they give the landlord $10,000. If there’s a shutdown, and nobody orders takeout, and they make $50, [then the landlord] gets $5.”

In Kim’s case, working out the new arrangement with his East Village landlord only solved half of his lease problem, because he had also signed a lease in June 2019 for a second, still-to-be-named restaurant on 19th Street between Fifth and Sixth avenues in the Flatiron District. He also plans to move Oiji there.

Kim initially received 10 months of free rent upon signing, with construction on the new location scheduled to begin this past February. But with the global shutdown due to COVID, and Kim having already spent $1 million on various planning and design costs, he even considered scuttling the project.

In this case, his new landlord wasn’t as immediately accommodating as his old one. But after several months of negotiations, he was able to sign a lease amendment stalling any lease payments until May 2021. Construction on the location is starting now, and he hopes to open both restaurants at the new location next June.

Looking at the big picture, it’s clear that the ability for restaurants to renegotiate reasonable lease terms during the pandemic will be crucial not only to their respective individual survivals in 2021 and beyond, but for the health of New York’s restaurant scene overall. Landlords hoping for a successful business moving forward have come to understand this, for the most part.

“If [our restaurants] are unable to start the payback based on the agreements we made, we’ll take those things into consideration and perhaps kick the can down the road,” said Aurora Capital’s Epstein. “We’re not a bank, but we’re a custodian of the neighborhood because we own so much in the Meatpacking District. Helping these restaurants survive something that was catastrophic is our duty.”