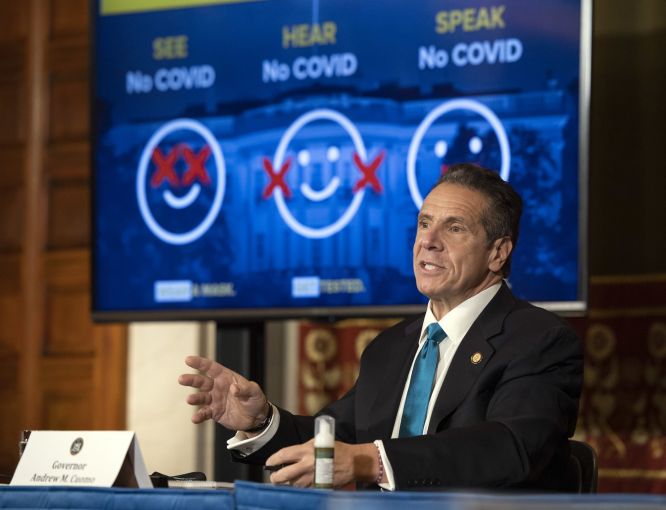 Gov. Cuomo announced that bars and restaurants statewide will now have to close at 10 p.m. each night in an effort to reduce the spread of COVID. Image: Mike Groll/Office of Governor Andrew M. Cuomo

In the face of rising COVID-19 cases throughout New York state, Gov. Andrew Cuomo announced today that gyms, bars, restaurants and any other business licensed by the state to serve alcohol must close at 10 p.m. each night starting on Friday, or risk receiving a summons from the police.

“We have to turn the valve, and that means reducing the number of people in indoor dining,” the governor said during a call with reporters today. “Some scientists are saying we might have to go back to full shutdowns, and I hope not. If we don’t get compliance and the numbers don’t go down, we will have to back off more.”

Jack Sterne, a spokesman for Cuomo’s office, justified the 10 p.m. restriction by saying that it keeps New York in line with restrictions in neighboring states like New Jersey and Connecticut, so that people don’t travel across state lines to New York after closing time in their respective states. He also argued that bars and restaurants get crowded later in the night, which means less social distancing, and that fewer hours of operation means potentially less COVID transmission.

City officials clarified that the 10 p.m. cutoff does not affect delivery and takeout for restaurants, only dining and drinking. The new rules take effect this Friday at 10 p.m.

The state will also cap parties and private gatherings at 10 people in response to reports of illegal parties in homes and commercial buildings. And Staten Island will now be subject to yellow zone restrictions on businesses and schools. Yellow zone rules limit worship services to 50 percent capacity, limit indoor dining to four people per table, and require that 20 percent of children in schools must be tested on a weekly basis.

Cuomo argued that the New York Police Department needed to aggressively enforce the new rules — particularly against bars and restaurants — in order to curb the spread of coronavirus in New York City. The city sheriff’s department typically handles civil enforcement against businesses, but it employs a small fraction of officers compared to the police department.

“One hundred-fifty sheriffs are not going to substitute for 33,000 NYPD [officers],” Cuomo said. “It doesn’t work. It’s an impossible situation.”