The financial building is 90 percent leased with more than 388,000 square feet 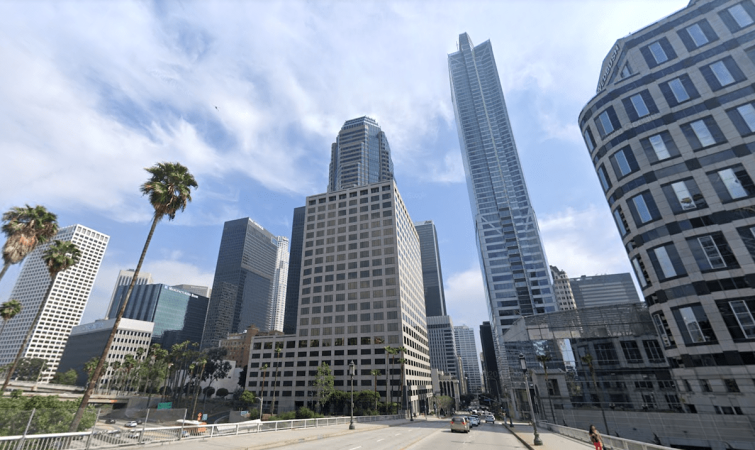 The building on Wilshire Boulevard includes more than 388,000 square feet of space adjacent to the 110 Freeway in the heart of the financial district. It's surrounded by the iconic buildings of downtown’s skyline. photo: Google Maps

Add another big office sale to the sudden influx of trades coming in to close 2020 for Los Angeles.

It includes more than 388,000 square feet of premier office space adjacent to the 110 Freeway and is blocks from the 7th Street/Metro Center station. The tower is named after its address at 915 Wilshire Boulevard, in the heart of the Financial District and surrounded by the iconic buildings of downtown’s skyline. It’s across the street from Wilshire Grand Center, L.A.’s tallest building, and about a block and a half from the U.S. Bank Tower, which was sold to Silverstein Properties this year for a discounted price of $430 million.

Rockwood and LPC West recently completed a comprehensive renovation at 915 Wilshire. It is 90 percent leased to 30 tenants, including professional and financial services, entertainment, insurance, law, health care and government. According to Newmark, which handled the sale, the weighted average lease term is more than eight years, and the rent roll is anchored by a 15-year General Services Administration lease for nearly a third of the property.

Deutsche Bank provided a $114.5 million loan on the property in May 2019, according to financial filings. Property records show LPC West — the West Coast arm of Lincoln Property Company — first acquired 915 Wilshire for $49 million in 2003. The firm sold it to Brickman Associates for $117 million in 2007, and then bought the building back nine years later for $128.5 million.

The sale will encourage a struggling L.A. office market haunted by coronavirus shutdowns. The Downtown L.A. submarket has a 15.7 percent vacancy rate and an average rent of $3.91 per square foot for Class A office space, according to the Downtown Center Business Improvement District’s third quarter report.

The 915 Wilshire trade is the second major sale for LPC West in as many months. In November, LPC West and Northwood Investors sold the Colorado Campus in Santa Monica for $166 million. At the start of the year, LPC West and Clarion Partners also acquired a three-building campus in Culver City for $169 million.