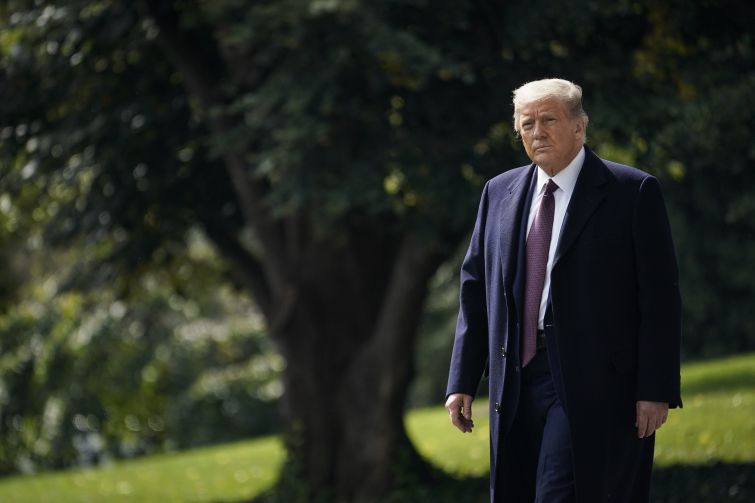 The stocks and futures markets took a dive early Friday morning, after news that President Donald Trump tested positive for coronavirus and a report showed that U.S. job growth started to slow last month, but have started to come back as the day wanes on.

Dow Jones futures dropped by more than 400 points in the morning, but have fluctuated throughout the day with some rebounds. Futures tied to the Nasdaq 100 opened with a more than 200-point drop. S&P 500 futures fell by nearly 27 points so far and have jumped around since.

Overall, U.S. equity real estate investment trusts (REITs) responded to this morning’s news by falling nearly 1.6 percent, to a low of 1,037.67, from 1,054.09 at market close yesterday. But, as of noon Friday, they have already rebounded and stabilized at just over 1,054, as per information from the MSCI US REIT Index.

Mortgage REITs, which have produced some of the highest-paying dividend stocks available in the market, fell 1.18 percent Friday morning, to 173.87, from 177.74 at close yesterday, following news of Trump’s health and the lackluster jobs figures, per information from the MVIS US Mortgage REITs Price Index. The index, though, quickly jumped back to above yesterday’s close.

News that Trump and first lady Melania Trump both tested positive for COVID-19 — which has killed more than 207,000 people in the United States this year and upended the economy — was reported just after midnight on Friday. White House physician Dr. Sean Conley said in a statement that the Trumps “are both well at this time, and they plan to remain at home within the White House during their convalescence.”

This comes despite Trump having repeatedly downplayed the severity of the coronavirus publicly and questioned the effectiveness of masks, even telling his staff to leave them off in front of him, the New York Times reported. His campaign has also continued to hold political rallies without mandating that guests and attendees wear personal protective equipment.

His diagnosis reignites uncertainty about a number of things tied directly to economic performance, chief among them the presidential election as well as the possibility of a second wave slowing reopening measures.

Aside from the general stock market’s immediate reaction today to Trump’s health, the sluggish job numbers released today by the United States Department of Labor — the last jobs figures to be released before election day — won’t provide any sort of buoy for sentiment.

Last month, companies added 661,000 jobs around the country, bringing the unemployment rate to 7.9 percent, lower than the 800,000 jobs Dow Jones estimated would return in September. It’s a large drop from the 1.5 million jobs brought back in August and the 4.8 million in June.

Some REIT stocks — which have been battered during the pandemic — started to fall this morning, with Simon Property Group and Vornado Realty Trust both posting a nearly 2 percent loss while SL Green Realty Corp. and Boston Properties had a nearly 1 percent decrease each. All have started to recover.

Publicly-traded and non-traded equity and mortgage REITs, which are traditionally considered defensive avenues for investment, ended 2019 on a strong note — well-capitalized and not overleveraged — and rode that wave into the first couple months of this year prior to COVID-19.

U.S. equity REITs peaked at a high of 1,358.59 on Feb. 21, before plummeting 44.2 percent to 757.71 by March 23 as a result of COVID-19, according to the MSCI US REIT Index. Over the next few months, it regained its footing, making up more than 50 percent of what was lost by June 8, before leveling out and running relatively stable through Oct. 1. Mortgage REITs have followed a similar trajectory, per information from the MVIS US Mortgage REITs Index.

“[The year] began where REITs had the highest capital and lowest leverage that they’ve had in 20 to 25 years,” Calvin Schnure, senior economist at the National Association of Real Estate Investment Trusts (Nareit), told Commercial Observer in March. “They’ve lengthened the maturities on their debt, so they don’t have a whole lot of near-term obligations. They have a lot of liquidity resources; they have cash and securities but more importantly, they have lines of credit that are enough to handle a whole year, or even several years, worth of interest payments. Most REITs are pretty well covered for handling the immediate crisis. And their operating [statistics] were good; they’ve started the year with occupancy rates at or near record highs.”