Regus Reups at 136 Madison in Nomad 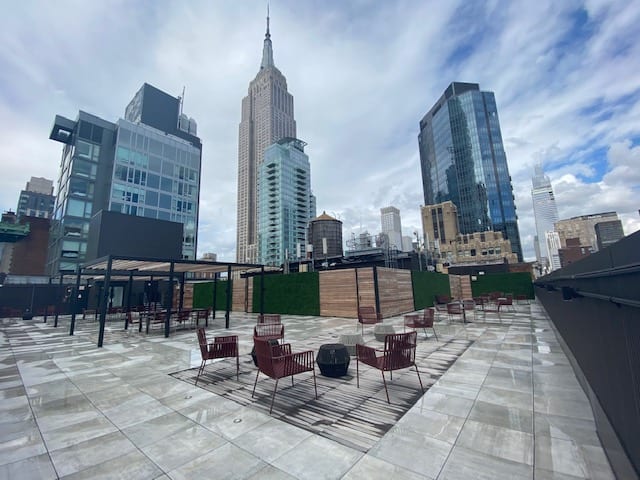 The new roof deck at 136 Madison Avenue is accessible via elevator. Courtesy of Colliers International.

While flex office has come in for quite a bit of punishment since the pandemic began, at least one of its battered players is still making moves.

Regus had already been occupying the fifth and sixth floors of the Williams Equities-owned building for a decade and a half and the new lease extends its stay through 2031.

“We’ve been obviously active in our portfolio with various members of the office leasing and flex office sector,” said Michael Cohen of Colliers International, who handled the lease for both the tenant and the landlord along with colleagues Andrew Roos and Mac Roos. “And when the pandemic hit we started having conversations with all of them… We were determined to make these relationships work—particularly in the case of Regus, which is a publicly traded company, has about a billion dollars in revenues, is profitable, positive EBITDA and a track record. Our objective was to make a way for Regus to continue to thrive in our portfolio.”

The rent was not disclosed, but according to Cohen the deal consists of shifting rents in tandem to what’s happening in the market.

“I am particularly proud of the long-standing relationship we have had at the building over the last 15 years,” said Michael Berretta, vice president of network development North America for IWG PLC, Regus’ owner. “Michael Cohen and his team have been excellent to work with in an incredibly difficult period. Having our building owners work with us as partners is a critical part of the new trends evolving in commercial real estate and flexible workplaces. We are confident that the future market opportunity will continue and are very pleased to be able to showcase 136 Madison in our global portfolio offering.”

The deal comes at a precipitous moment for Regus; in September it was reported that the global office provider was putting several of its New York City locations into bankruptcy.

But the office provider is now shifting its focus to profitable locations.

“Regus made it clear that they were identifying—as all the operators in their sector are—which are the successful locations and which aren’t as successful,” Cohen told Commercial Observer.