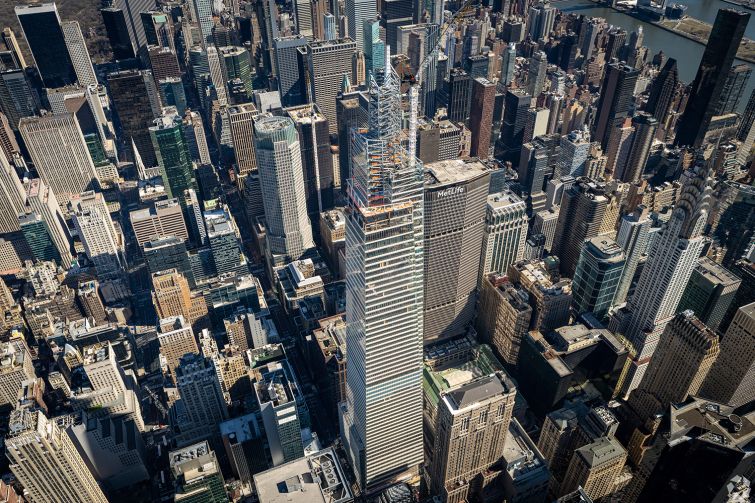 One Vanderbilt in Midtown. Courtesy of: Costar Group

Much like the overall city itself, Manhattan’s office market has been a veritable ghost town since the onslaught of COVID-19.

The market saw leasing slow to levels not seen this century, according to a Cushman & Wakefield report released over the summer. “Manhattan new leasing fell to a 25-year quarterly low of nearly 2.5 million square feet, compared to a quarterly average of 8.4 million square feet in the prior three-year-period.”

While the third quarter reports will not be ready for another few weeks, the data on the effects of COVID-19 on the Manhattan office market during the second quarter were as grim as expected, showing that new leasing year to date fell to 8 million square feet, “the lowest mid-year total since 2009,” and that the Manhattan vacancy rate grew by 60 basis points to 11.9 percent, “the highest quarterly level since 2004,” according to Cushman & Wakefield.

“We finished 2019 at almost a record high year, so it would be hard to surpass that going into 2020,” said Lori Albert, the brokerage’s research director. “We started the year a little bit lower than 2019, but the impact of COVID led to a much steeper decline in demand by April. Q2 was a very low quarter.”

With reservations about health and safety and the rise of work-from-home stalling the return of workers to the office, the pace of leasing in Manhattan became a spiral, with companies staying away from securing new deals.

“I think the mid-market and the smaller market are still very hesitant to engage,” said Peter Riguardi, chairman and president of JLL‘s New York region. “They’re considering shorter-term options for renewing, or delaying decisions so they can get a better read on how the market will adjust and what the work-from-home implications will be. I think those things will play themselves out better over the next six months or a year.”

All of New York City’s submarkets felt the pinch.

“The strongest market in Manhattan for the last two or three years was Midtown South, because of its heavy tech element,” said Spencer Levy, chairman of Americas research and senior economic adviser for CBRE. “While it was the strongest-performing market in the last two years, it suffered a greater fall on a percentage basis than Midtown or Downtown in the last year. No market was immune, but Midtown held up the best of the three [Manhattan] submarkets.”

Levy notes that the tech industry’s mobility sector has hurt it in the short term during the COVID crisis.

“We throw the tech industry into one bucket, but there are segments of tech that are weak,” he said. “A lot of the areas of tech that were dependent upon mobility, particularly those around the travel business, have gotten hit very hard, which is why you’re seeing markets that have a higher concentration of tech, like San Francisco, suffering more than Manhattan, which has a greater and much more diversified economy.”

CO also looked at the big leases of the COVID-19 era; the state of rents and sublease space; and how the Brooklyn office market is faring.