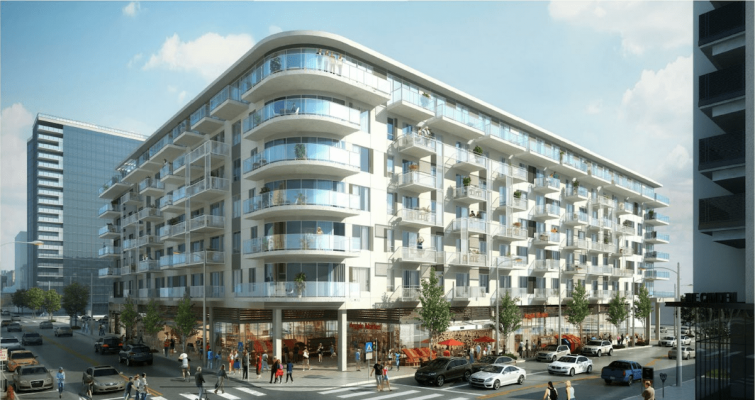 Mill Creek Residential Trust is moving forward with plans to build a seven-story mixed-use project in the heart of Hollywood.

The Los Angeles City Council’s planning committee on Thursday unanimously approved the Modera Argyle project, which calls for 276 units and 260,250 square feet of total space at the corner of Argyle and Selma Avenues, one block south of the Metro Red Line station at Hollywood & Vine.

Twenty of the units will be designated for very low-income households, and Mill Creek is making a $1.5 million payment to the local council district’s Affordable Housing Trust Fund. Modera Argyle will also include either 24,000 square feet of retail and restaurant space, or a 27,000-square-foot grocery store.

“This project will bring 276 units of much-needed housing to the city, including both affordable and market-rate residences, as well as new ground-floor commercial uses, including a proposed grocery store,” said Craig Bullock, planning director for the council district that includes Hollywood, in a letter to the committee.

The building will rise to a maximum of 99 feet on a 48,403-square-foot lot, where six commercial buildings totalling about 61,800 square feet of floor area will be demolished. Fred Rosenthal, who owns the current property and businesses, said he supports the development project.

“It’s a really well-conceived project,” he said. “[It includes] ground-floor retail which is badly needed, a supermarket to service all the apartments and the projects in the adjoining area. It’s critical, and the only supermarket around is Trader Joe’s, and it’s completely overwhelmed by all the existing apartments that were recently built.”

The surrounding Hollywood area is seeing a wave of major developments. The Modera Argyle site is just north of Sunset Boulevard and the Hollywood Palladium, which is set to see two residential towers with 731 units added around it through a Crescent Heights development. Relevant Group is building four hotels near Wilcox Avenue, and Harridge Development Group’s massive Crossroads Hollywood with 950 units is also nearby. GPI Companies is also building a 26-story tower at 6400 Sunset Boulevard.

Mill Creek has worked on other multifamily projects in L.A., including the Modera Hollywood with 248 units closer to Highland Avenue. Last year, the firm received  $165 million in financing from Square Mile for the Modera West LA project on Center Drive in West L.A.