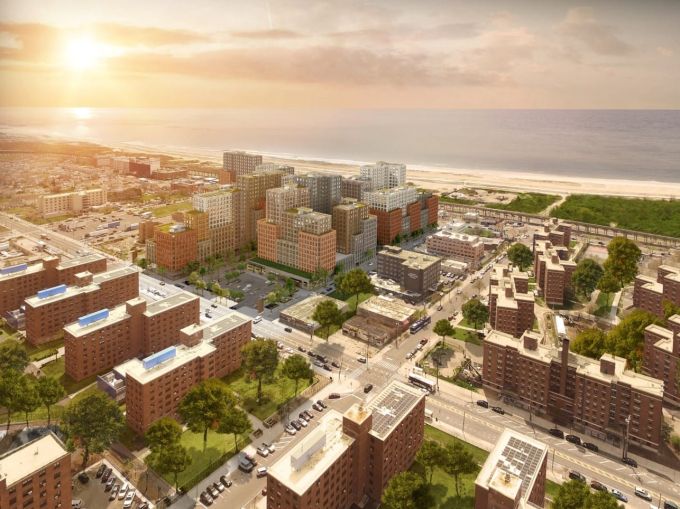 Edgemere Commons is due to include 11 buildings. Aufgang Architects

In late 2019, a major plan to convert the site of an old hospital in Far Rockaway, Queens, into one of the largest mixed-income developments of the de Blasio era cleared both the City Council and the city’s land use review process. All systems seemed go on what its developer called Edgemere Commons.

Then the coronavirus pandemic struck.

The project is shovel-ready, but the pandemic’s affects have slowed financing, according to Daniel Moritz, a principal at the Arker Companies, the privately held, Long Island-based developer behind Edgemere Commons.

“So projects that already had financing certainly had to deal with construction delays,” Moritz told CO in late August during a wide-ranging interview about Arker’s plans and projects. “But projects that don’t have financing yet, that’s where I think our industry faces its biggest challenge.”

Edgemere Commons is still due to include 11 buildings with some 2,050 mixed-income housing units, including ones aimed at seniors and ones designed for multigenerational living, on a parcel south of Beach Channel Drive, east of Beach 53rd Street and west of Beach 50th Street.

Arker’s involvement with the site started in 2016, when it lead the $19 million purchase of the old Peninsula Hospital, which had shuttered four years before, primarily due to financial troubles. In what turned out, too, to be a crucial turn for the proposed development, Hurricane Sandy had severely damaged much of Edgemere in 2012. That set about revitalization planning. Local officials and residents began creating boxes for the public and private sectors to tick.

One of the biggest was affordable housing, another was amenities for the neighborhood, including grocery stores. Also, given the experience with Sandy, there were calls to address the fact that nearly all of Edgemere’s 6,635 residents toward the end of the decade lived in a flood zone.

Arker tailored its pitch to these concerns, including those affordable housing plans as well as ones for a new street network, a supermarket (in this case, Western Beef), and design features to make Edgemere Commons more climate-change resistance. These features include plans for bioswales, a bioretention rainwater system, backup generators and systems, and an elevated central plaza.

Such features won local support for the project, including that of area City Councilman Donovan Richards. His support of Edgemere Commons ensured unanimous City Council approval for the project in November 2019 (it’s tradition for the full council to follow the local member’s lead on development in their district). Manny Silva, chief of staff for Richards, who’s favored to win election as Queens borough president this fall, reiterated to CO that not only does the councilor support Edgemere Commons, but that “many people in the neighborhood of Edgemere also support the project.”

Right now, though, the construction timeline is uncertain because the pandemic has rendered financing for the project uncertain, as it has for so much commercial real estate. Moritz said Arker—an increasingly major player in the city’s affordable housing development and preservation—is ready to move once there’s more certainty.

“Now, not just our project, but many projects that are critically important for neighborhoods like this are seriously in danger,” he told CO in August. “We believe in the project, we’re still investing in construction plans. We’re shovel-ready and ready to go. At this point, it’s an issue of funding.”