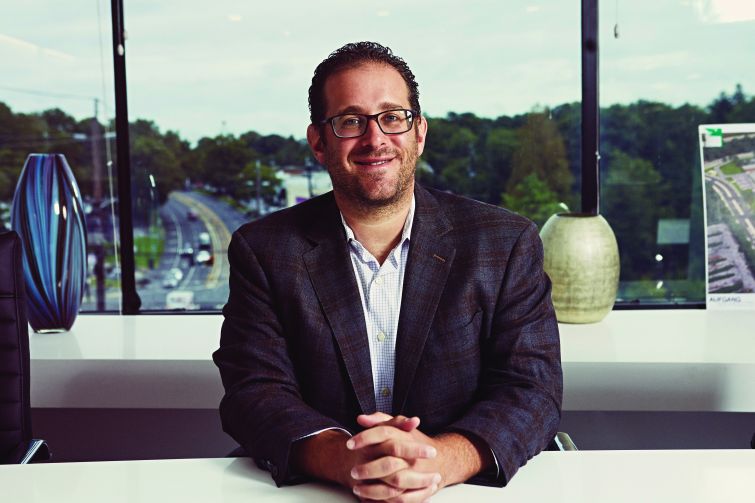 More is Moritz: The Arker Companies principal sees opportunity for firms like his in New York City’s acute need to upgrade its affordable housing stock. Emily Assiran for Commercial Observer

A plan to renovate some 2,625 apartments and common areas via the New York City Housing Authority and a handful of partners has been nicknamed the Brooklyn Megabundle. The Arker Companies, a privately held real estate firm based in Long Island, is one of those partners.

The company has extensive experience in affordable housing development and management in the five boroughs. Its projects include multi-building plans in Far Rockaway, Queens, and East New York, Brooklyn. It also owns nearly 10,000 affordable housing units, and has developed or preserved some 11,000 as well, according to the firm.

But it’s that project through NYCHA that Arker is really excited about, according to Daniel Moritz, a principal at the firm. It involves not only the execution of a multifaceted plan with many moving parts, but it will also result in what the housing authority has described as “vital improvements to elevators, security and heating systems” in several Brooklyn affordable housing complexes.

Plus, Moritz said, the Brooklyn Megabundle showcases what can work in an affordable housing financing market that faces mounting challenges due to the novel coronavirus pandemic.

How are things business-wise in the age of COVID?

On the ongoing ownership side, it’s been a challenging time, though I’ll say I think folks in our industry are doing okay as far as collections and ongoing operations. A lot of that has to do with the nature of the business and the fact that units are affordable. They’re designed so that the people living in them are not rent-burdened to begin with, and a lot of them are satisfied through vouchers and other programs where, if the tenants do lose income, the vouchers are designed to pick up the slack if you will.

What we have been doing is spending a lot of time on the property management side proactively reaching out to tenants, finding out who has issues, connecting them with social service providers.

We were one of the originators of a philanthropic program called Project Parachute, which we put together with a number of peers in our industry and partnered with Enterprise [Community Partners] with the goal to put tenants in touch with social service providers who can help them with a number of issues that people are going through. The pandemic has forced us to be more proactive with our tenants, and I think that’s a good thing.

Flipping the lens to development, we have a significant amount of work under construction right now. We have a 1,200-unit project in East New York that is six buildings that are all scheduled to be completed this year.

It’s called the Fountains. It’s a project we’re very excited about. Obviously, we’ve dealt with some delays in construction, trying to complete in the pandemic. But we got [temporary certificates of occupancy] on the first buildings in the middle of the pandemic, which is something we’re pretty proud of. The first building rented up completely. The second building is renting up right now. And the third, fourth, fifth and sixth buildings are scheduled for TCO in the next couple of months. It’s something that we’re super proud of that we’ve been able to navigate at this time.

Along those lines, can you talk about Edgemere in Far Rockaway. How’s that going?

That’s really one of our bigger challenges at this point. So projects that already had financing certainly had to deal with construction delays. But projects that don’t have financing yet, that’s where I think our industry faces its biggest challenge. For us, Edgemere Commons is a project that we spent five years planning and working with the Department of City Planning, local council member—soon to be Queens Borough president—Donovan Richards—on a ULURP on the site of the former Peninsula Hospital. It was an intense process, like most ULURPs are, and we completed the ULURP in November of last year. [Note: Richards won the Democratic primary for Queens borough president in July.]

That’s a project we’re really excited about. It’s a project that the neighborhood of Edgemere embraced and advocated for. It’s 11 buildings, 2,050 units of affordable housing. The first building has a supermarket. It’s a neighborhood that’s a food desert, so that’s super critical there.

The issue there is we completed the ULURP last year, the funding pipeline at [the city Department of Housing Preservation and Development] is already crowded, but I think everyone knows that HPD took a really harsh budget cut thanks to COVID. Now, not just our project, but many projects that are critically important for neighborhoods like this are seriously in danger. We believe in the project, we’re still investing in construction plans. We’re shovel ready and ready to go. At this point, it’s an issue of funding.

Can you elaborate? What would be the timeline?

The timeline is dependent on funding from the city realistically. We were hoping and planning to be ready to go by the end of this year. But I think that’s seriously in doubt given the budget crisis.

We’re hoping for some help from the federal government in that respect. There are a lot of ways they can fill the gap. But it’s a tough year to hope for help there. We believe in the project, the neighborhood believes in the project, and we’ll be ready to go as soon as we’re given a green light.

What other big projects is Arker working on?

In terms of new construction, that’s our future focus. Our Fountains project is kind of our past and present, if you will. It’s similar to Edgemere Commons—kind of like a master-planned-type project that went through significant site planning. We’re super-excited to be bringing that online.

But our other focus is preservation. The most exciting project we’re working on right now is the PACT project, which is called the Brooklyn Megabundle. It’s a joint venture between us, Omni, Dabar Development and Bed-Stuy Restoration Corporation along with NYCHA. And it’s 2,625 units in nine developments in Brooklyn, and it’s going through [the Department of Housing and Urban Development’s Rental Assistance Demonstration program, or RAD]. NYCHA is, and should be really, the focus of a lot of affordable housing in the coming decade. The buildings are functionally obsolete and need to be addressed as soon as possible.

What ways does it need to be addressed? What does doing that entail?

It’s really renovations. They’re not at the point where they’re unfixable. But they can’t be fixed under the current public housing program because public housing isn’t designed to operate like that.

So that’s why, however many years ago, the federal government, HUD, designed the RAD program. The RAD program is essentially the conversion of public housing to Section 8 housing, providing the residents all the same protections they had under public housing but allowing for the infusion of private capital and lending in order to bring the necessary capital in. It’s been enormously successful throughout the country—but only really embraced in New York City a few years ago and has been extremely successful.

Our project is the largest one to be done to date. And so it’s really exciting and an honor to be part of it. But I think it’s a sign of things to come as far as the type of focus that there needs to be on NYCHA and preserving affordable housing. And it can be done without subsidy. The key, and why it’s not necessarily impacted by COVID in terms of financing, is because the financing is done through equity and debt, and there’s no city subsidy or capital.

Can you explain how Arker got the PACT agreement? Take us through.

Sure. So NYCHA has essentially ongoing RFPs for these RAD deals. This was probably the 10th one that was out there. The first one was actually a project called Ocean Bay in the Rockaways, actually right across the street from our Edgemere Commons project. And since then there’s just kind of been an annual flow of RFPs.

The good thing is there are a lot of capable operators in the field of preservation, and there are a lot of opportunities for developers both large and small. I think in recent years NYCHA’s even focused on doing some smaller bundles that would be appropriate for not-for-profit developers and for smaller MWBE [women- or minority-owned] developers, and some larger bundles like this for folks like us or Omni, who’ve done tens of thousands of units of preservation. I think NYCHA’s done a good job in recent years of widening the field and making sure that there are opportunities for everyone.

Back to financing for affordable housing. It sounds pretty grim. What would be the signs of change in the coming year?

I think it is a little grim now, unfortunately, because of the budget crisis. I think it needs to see a turn in the pandemic, and people start returning to New York City, and the budget starting to get better again.

I think, realistically, we need the budget to get better. But we need a renewed focus from the federal government on affordable housing.