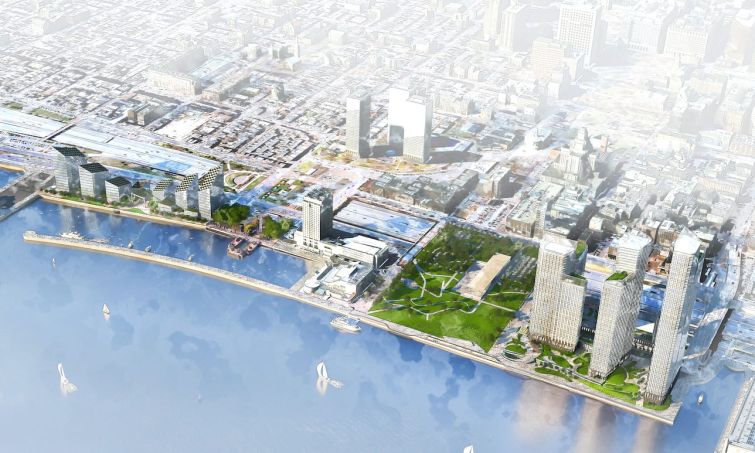 The Durst Organization has won the bid to develop Penn’s Landing along the Philadelphia waterfront, beating out a rival proposal from the NBA’s 76ers to build a basketball arena on the site.

The nonprofit agency, which is responsible for the development of a portion of the Delaware waterfront in central Philadelphia, has planned a 12-acre park along the river, with development sites north and south of it totaling 11 acres.

The Sixers’ bid included a 19,000-seat arena, surrounded by residential buildings, a hotel, a public school and retail. Other bidders included a group of developers led by Hoffman & Associates, which proposed high-rise residential buildings to the north of the park, and another group of local developers, including Keystone Property Group, Hersha Hospitality Management and Toll Brothers.

The northern site, bounded by Market and Chestnut streets, was home to an ice-skating rink and the failed Camden Tram. A proposal in the early 00s for a shopping center developed by Simon Property Group was scrapped.

DRWC will negotiate with Durst over the plans for the site, and will begin a community engagement process once a formal agreement between the agency and the developer is signed, DRWC president Joe Forkin said at the agency board meeting Wednesday, per the Inquirer.

“We are honored DRWC has selected us for this transformative project that will provide Philadelphians’ extraordinary access to the waterfront,” Durst president Jody Durst said in a statement. He is looking forward to creating “economic opportunity and jobs for all Philadelphians, particularly disadvantaged businesses and people of color,” Durst added.