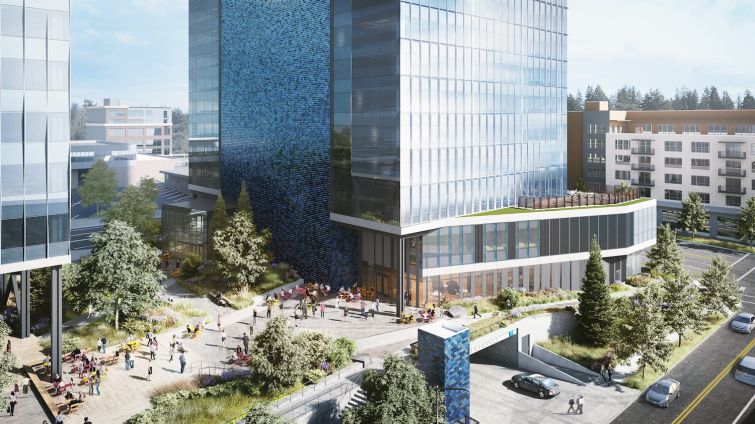 Amazon didn’t get the memo about the supposed death of the office.

The e-commerce giant announced today that it leased 2 million square feet in two developments in Bellevue, Wash., with plans to add 10,000 jobs in the city. It comes just weeks after Amazon said it would add 3,500 new jobs in offices around the United States.

Amazon’s new Bellevue offices will be spread out in Vulcan’s under-construction 42-story 555 Tower office project and the three-building West Main in Bellevue, the developer said. Both developments plan to open in 2023.

“We are very excited to be working with Amazon again,” Ada Healey, chief real estate officer for Vulcan, which has developed offices for Amazon in Seattle, said in a statement. “And we are thrilled to be kicking off our first development projects in the Bellevue [central business district].”

Aside from the Vulcan developments, Amazon is also in the second phase of its 27-story office tower in Bellevue, Bellevue 600, which it expects to complete in 2025, the company said. It said it also plans to donate $1 million to health and human services providers in the city.

“We look forward to bringing more jobs to Bellevue —contributing to a regional growth strategy that can create opportunities for people across the Puget Sound,” John Schoettler, Amazon’s vice president of global real estate and facilities, wrote on the company’s blog.

While companies have been increasing work from home options for employees and considering shrinking their portfolio after seeing the success of remote work during the coronavirus pandemic, tech giants like Amazon and Facebook have gone all-in on physical offices.

Amazon’s New York City plans include a 2,000-employee office at Lord & Taylor’s former 424 Fifth Avenue flagship, which it bought from WeWork for $1.15 billion in March. It’s set to open in 2023.