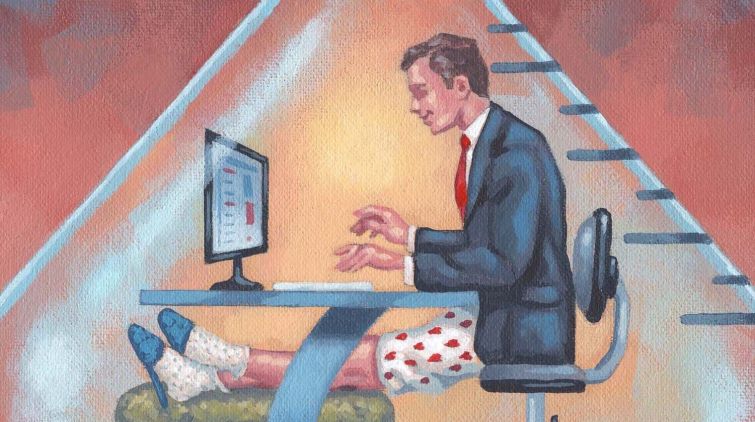 Working from home has become a major experiment for the business world the past six months. Illustration: Eric Westbrook

There is an increasing body of evidence that the age cohort that most wants to return to the office is younger workers. Surveys since the novel coronavirus pandemic sent so many scurrying to work remotely—and threw the market for office space into such tumult—suggest that it’s not older workers who might not be as familiar with telecommuting technology that want back into physical workplaces but the tech-savvier likes of millennials and Generation Z.

Some 70 percent of Generation Z and 69 percent of millennials surveyed by Cushman & Wakefield for a summer analysis called “Future of Workplace” reported challenges in working from home. That was compared to 55 percent of baby boomers.

The main challenge? Finding space. Older workers are likelier to have dedicated workspace at home, according to the Cushman & Wakefield report. They’re also less likely to have distractions such as roommates—or their baby boomer parents themselves as many younger workers have moved back in with family amid the pandemic upheaval. Finally, younger workers are also likelier to be caregivers at home, either to older parents and younger children, including ones in need of home-schooling.

“In contrast, baby boomers appear to be coping and adapting the best—reporting fewer challenges and positive workplace experiences,” the Cushman & Wakefield survey said. The analysis drew on what the firm described as 1.7 million data points from more than 40,000 respondents worldwide.

Architecture and design firm Gensler surveyed 2,300 U.S.-based office workers at companies with at least 100 employees each. Its survey reached conclusions similar to the Cushman & Wakefield one: Younger workers find they face more challenges than older ones in working from home.

The younger workers reported more distractions as well as less experience with working from home in the first place. These have made it more difficult apparently for millennials and Generation X and Z members to maintain a life-work balance. A quarter of baby boomer respondents, for instance, said that it was harder to maintain a work-life balance working from home. Compare that with 33 percent of millennials and Gen Z and 37 percent of Gen X.

Then there was a less tangible challenge for the younger cohort, one that executives have mentioned as an impetus for getting people back into the office as soon as possible. Basically, younger workers are missing out on mentoring and making connections (something very important for advancement in the commercial real estate industry itself).

“They are less likely to feel as if they’ve made a difference or completed the work they needed to do at the end of a typical workday, according to survey responses,” Gensler’s report said. “Working from home may be having an alienating effect on younger workers, too, as they may feel a gap between their work and their company’s mission.”

Whatever the desire of younger workers—or any workers—to return to the conventional office, more employers are opting to continue having their people work remotely. Several such companies employing a total of 2.6 million workers recently said they had postponed plans to return to the office after Labor Day. That will be the same week that marks the six-month anniversary since the World Health Organization declared the coronavirus a pandemic.

Meanwhile, the commercial real estate sector continues to grapple with the remote work phenomenon. Some parts, that is, more than others.