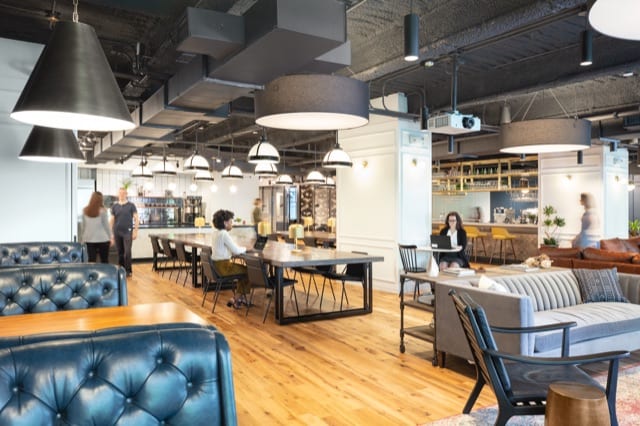 Tishman Speyer rolled out its coworking concept, Studio, to two more Manhattan buildings, as some predict flexible office leases to become more popular for businesses in the wake of the coronavirus pandemic, Commercial Observer has learned.

The landlord brought the Studio model to 110,000 square feet across four floors at its Rockefeller Center building at 1230 Avenue of the Americas and 32,000 square feet at 300 Park Avenue in Midtown, according to Tishman Speyer.

“Studio’s flexible and highly curated options are ideal for those looking for a flexible, ready-to-move-in space, without having to compromise on its quality,” Thais Galli, a managing director at Tishman Speyer and the head of Studio, said in a statement. “We have seen companies use it as their HQ as they grow, to enter a new market, expand their footprint in a market but with flexibility, current tenants that are retrofitting their offices to meet the newly established social distancing guidelines and temporarily require additional space, and also those considering a transition to a larger office footprint, looking for a mix of traditional and flexible terms.”

Tishman Speyer launched the Studio concept in 2018 as a direct competitor to companies like WeWork, Knotel and Industrious, whose business models relied on signing leases or otherwise striking deals with landlords, then offering up blocks of the space to smaller companies with more flexible options.

The landlord, which has 167 million square feet of space in its portfolio, cut out the middleman and rolled out the platform first in Rockefeller Center of nearly 35,000 square feet at 600 Fifth Avenue, which it said it fully leased in five months. It then brought the concept to its properties in Los Angeles, Boston, Chicago, Brazil, Frankfurt, London and Washington, D.C.

Coworking and flexible office providers have been reeling during the pandemic, with many laying off or furloughing employees and others in talks to give back space.

WeWork CEO Sandeep Mathrani previously told investors it was looking to exit or restructure 20 percent of its leases, and Knotel is in talks to walk away from about 1 million square feet of its portfolio.

However, experts said flexibility will become vital for companies coming out of the pandemic, with providers previously saying they’ve seen an increase in demand as companies don’t want to commit to a long-term lease amid the economic damage wreaked by the coronavirus, and others wanting satellite officers closer to employees to cut down on commutes.

Galli added during a CO webinar that other landlords have approached Tishman Speyer about how to get into the market themselves or partner with Studio. And for Studio’s new 1230 Avenue of the Americas location, Galli said it’s already almost half full.

“The need for flexible office workspace has grown tremendously, and we are pleased that the new space at Rockefeller Center already is nearly 50 percent leased despite the launch during the current situation,” she said in a statement.