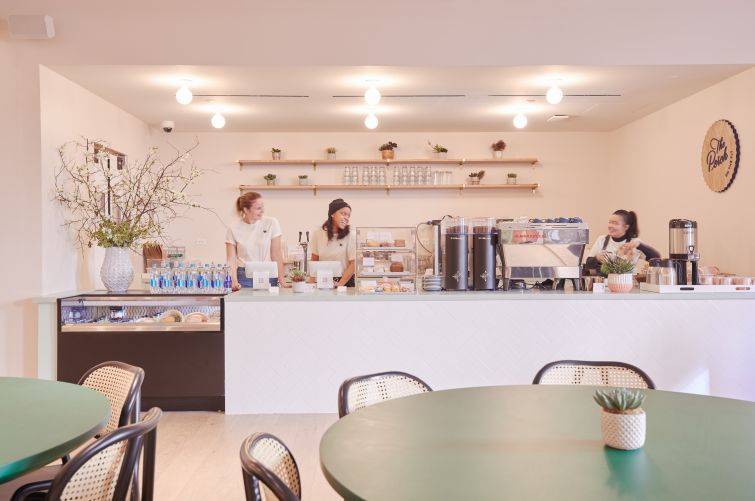 Fourth floor at The Wing at 52 Mercer Street. Photo: The Wing

Women’s coworking operator The Wing laid off another round of employees amid coronavirus shutdowns, after it already cut the majority of its staff and its co-founder Audrey Gelman resigned as CEO, state records show.

The Wing laid off 56 workers — a mix of hourly employees and corporate staff — starting on July 1, according to a WARN Act notice made public Friday.

The company notified staff nearly two weeks ago about the staff reductions and sent an email out to employees and members, according to a spokeswoman for the company.

“We are pausing our programming, the app [which keeps members updated about events] and will continue to keep memberships paused,” the email said. “We know that we need to rethink our spaces due to the effect the pandemic has had our businesses like ours. The Wing will go on, but we need to tear down the foundations, evolve and rebuild the way forward.”

“This team still has the energy to dream up a new version of The Wing and to tear down and rebuild the foundational structures that led us to this place,” the email continued. “We believe that there is a way forward for our community and we are determined to find it.”

A spokeswoman for The Wing did not say how many of the laid-off employees were corporate staff and the company’s total headcount.

In April, The Wing laid off the majority of its hourly workers and half of its corporate workforce as the coronavirus pandemic forced it to temporarily shutter its locations, as Commercial Observer previously reported.

Employees in the first batch of cuts were offered two months severance along with full health benefits until June. Staffers in the most recent round of reductions were given similar packages, according to the email. It also started a “relief fund” to give $500 grants to any former workers at its locations.

The Wing was founded in 2016 by Gelman and Lauren Kassan and grew to about 12,000 members in locations in New York City, San Francisco, Los Angeles, Boston, Chicago, London and Washington, D.C. It pulled in more than $100 million from companies like Sequoia Capital, WeWork and Airbnb along with celebrities Mindy Kaling, Kerry Washington and Megan Rapinoe.

In November 2019, WeWork started to quietly divest from the company and sold its stake to a group of investors that included talent agency Creative Artists Agency in January, Bloomberg reported. That deal slashed its valuation from $365 million to about $200 million.

The company also came under fire for the conditions of its staff at its locations — with some complaining of low pay, long hours and poor treatment from management and members — and its mistreatment of people of color, the New York Times reported.

In June, Gelman resigned as CEO because it was “the right thing for the business and the best way to bring The Wing along into a long-overdue era of change,” according to an email shared with reporter Kara Swisher.