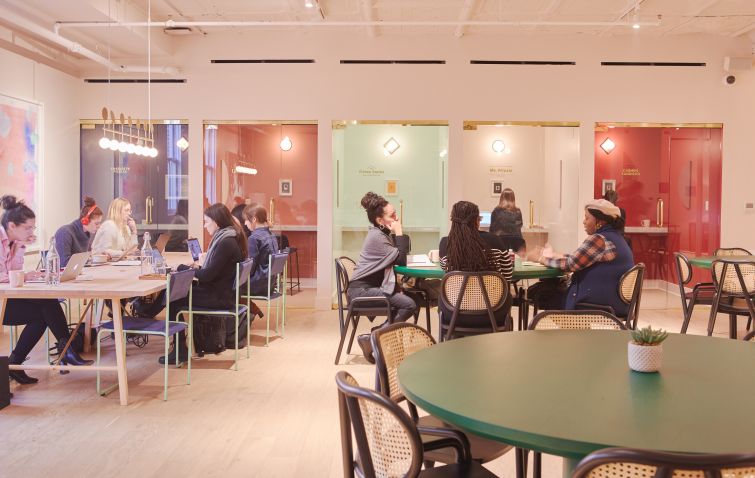 The Wing's Soho location on Mercer Street. Photo: The Wing

Women’s coworking operator The Wing is laying off most of its hourly employees and half of its corporate workforce amid coronavirus shutdowns across the country, the co-founders told workers this morning.

In an all-hands call obtained and first reported on by Vice’s Motherboard, Wing co-founders Audrey Gelman and Lauren Kassan told employees that they would be notified about the layoffs by 6 p.m. today. A Wing spokeswoman did not immediately return a request for comment.

Employees will receive two months severance, will remain on the company healthcare plan through June, have their paid time off paid out, will have access to mental health services, career coaching and Rosetta Stone classes “to help develop English language skills,” Kassan said on the call. The company closed all of its locations on Wednesday.

“Our only path forward is to make significant and painful cuts, layoffs and furloughs to prevent The Wing from closing as a business,” Kassan said. “We are so very sorry about this. We now face the unimaginable and deeply painful outcome of having to lay off almost all of our space teams, and half of our headquarters.”

She added that the founders had decided to forgo salaries and had sought financial aid from the federal government. Some executives will also take pay cuts.

Founded in 2016 by former Hillary Clinton communications staffer Gelman and ex-ClassPass business director Kassan, The Wing has 12,000 members and has raised more than $100 million from firms like Sequioa Capital, WeWork and Airbnb, as well as celebrity investors like Mindy Kaling, Kerry Washington and Megan Rapinoe. The company has several locations in New York City, along with outposts in D.C., San Francisco, Los Angeles, Boston, Chicago and London.

“A few weeks ago we were talking about which locations we were going to open next,” Gelman said on the call. “Then seemingly out of nowhere a global crisis, the likes of which no one has ever seen. Now we don’t know when or if we’ll be able to re-open again. This pandemic has drastically changed our prospects for the future. We’ve seen 95 percent of our revenue disappear overnight.”