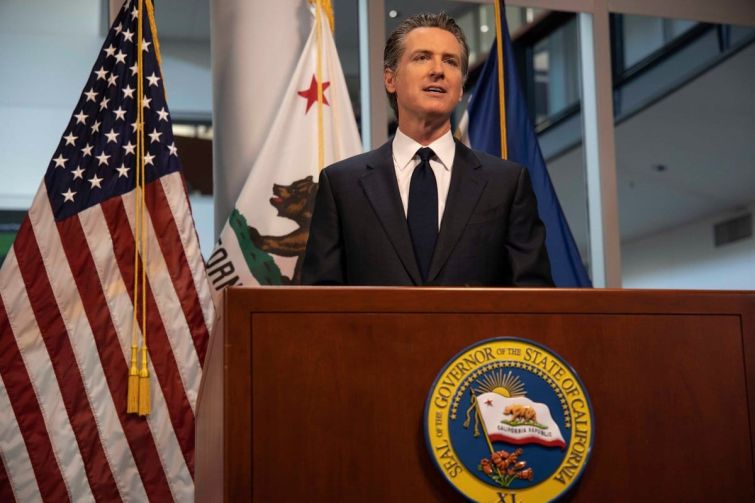 Gov. Newsom referred to the reopening process as a “dimmer switch,” not an “on-and-off switch.” photo: Governor Newsom Press Office

California’s economy is the latest to suffer coronavirus-induced whiplash.

Less than four weeks ago, businesses like bars and nail salons were allowed to reopen in Los Angeles with limited capacity. Since then, the number of cases in California since the pandemic hit has doubled to 329,162.

The announcement was effective immediately and has no set end date. It also applies to counties including Orange, Riverside, Sacramento, San Bernardino, San Diego, Santa Barbara, and Ventura counties, among others.

Newsom had emphasized that officials needed the ability to “toggle back” on reopening the economy if the situation got worse. He referred to the reopening process as a “dimmer switch,” not an “on-and-off switch.”

Just before the Fourth of July weekend, Newsom and state health officials said 19 counties must immediately re-close dine-in restaurants and bars for at least three weeks. This week, the state is similarly expanding that order for breweries, bars, and pubs throughout the state, unless they are offering sit-down meals outdoors, and comply with guidance issued on June 28.

Sandy Sigal, CEO and founder of NewMark Merrill Companies, said earlier this month that the back-and-forth is negatively impacting the momentum and viability of business for both tenants and landlords. On Monday, State Senator Shannon Grove sent a letter to Newsom, “demanding he supports and listens to businesses across the state.”

“Over the last several months, you have been granted expansive powers to address the ongoing public health emergency,” the letter read. “At the beginning of this crisis, you stated numerous times that data and science would be your compass to justify how we as a state would react to this pandemic. Unfortunately, your actions over the past week to unilaterally shutter small businesses across the state seem to not be based on science or data, and instead seem to be unsubstantiated and reactionary. It is also concerning that your powers may be used to reshape California.”

Grove said there are four million small businesses across California that employ more than 7.1 million people, and the shelter-in-place modifications have cost businesses thousands in capital at a time when they were already struggling. She cited a survey released May 29 by the L.A. County Business Federation that found nearly 90 percent of businesses said the “stay-at-home” orders severely impacted their revenue, with 46 percent losing half or more of their projected revenue for the year.

“Far too many of these businesses are at risk of closing for good because of the government-induced shutdown,” Grove said. “I implore you to listen to small business owners and promote policies that help them create jobs, expand their business and offer the vital services that they provide to our communities.”

Newsom also emphasized on Monday that the “virus is not going away anytime soon.”

“I hope all of us recognize that if we were still connected to some notion that somehow, when it gets warm, [coronavirus is] going to go away, or somehow it’s going to take summer months or weekends off. This virus has done, neither,” the governor said. “As we’re seeing triple-digit weather in many parts of our state, we’re still seeing an increase in the positivity rate, increase in community transmission, we’re seeing an increase in the spread of the virus.”