The site is entitled for the development of 275,000 square feet creative office space. 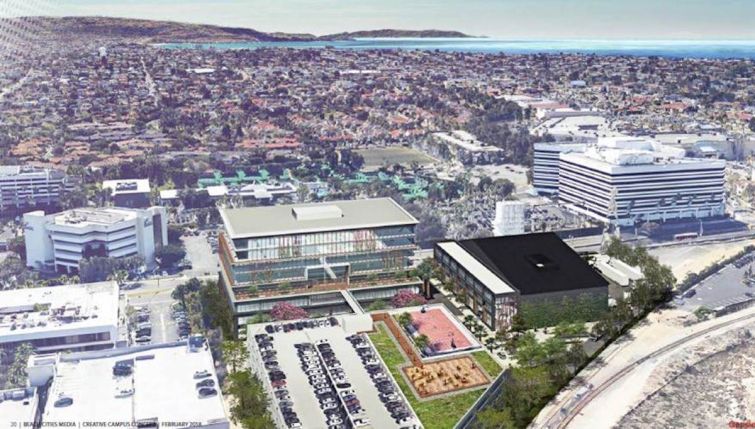 The site at 2021 Rosecrans Avenue is fully entitled for approximately 275,000 square feet of Class A creative office space, as well as a 66,000-square-foot studio and production building, and 7,000 square feet of retail. Rendering: Continental Development Corporation

BXP bought into an existing joint venture on the project with owner and developer Continental Development Corporation and Mar Ventures, Inc. The site is fully entitled for the future development of approximately 275,000 square feet of Class A creative office space, as well as a 66,000-square-foot studio and production building, and 7,000 square feet of retail.

The site spans 6.4 acres at 2021 Rosecrans Avenue at the western border of Continental Park, Continental’s 3-million-square-foot, 86-acre office and mixed-use campus, which is home to several Fortune 500 tenants. Richard Lundquist, president of Continental said their teams have been exploring partnership opportunities for Beach Cities Media Campus for some time now.

Barbara Voss, Deputy City Manager of El Segundo, said the city is excited to welcome one of the country’s premier developers.

“The Beach Cities Media campus is an important investment in our city and it will be an exciting addition to the city’s diverse mix of office space,” she said in an emailed statement to Commercial Observer. “This state-of-the-art campus, with an ideal South Bay location, will be a catalyst for continued economic growth in El Segundo.”

El Segundo — located near the coastal cities of Manhattan Beach, Hermosa Beach and Redondo Beach — continues to expand its status as an affordable alternative for businesses and young professionals when compared to West L.A. and Silicon Beach. It has become one of the most in-demand creative office, restaurant and retail spots in the South Bay region of L.A.

The small city is minutes from LAX, and five miles from SoFi Stadium and the accompanying 298-acre mega sports and entertainment development.

The city was previously dominated by military defense and aerospace buildings, but over the past several years, new landlords have been converting those sites into modern office buildings. In March, before the pandemic, Commercial Observer reported that the average rent for Class A space in El Segundo jumped to $4.36 per square foot after 2019, up from $2.84 per square foot four years prior, which amounts to a 54 percent increase.

Boston Properties claims to be the largest publicly-traded developer, owner and manager of Class A office properties in the country. In L.A. County, the firm also owns the 1-million-square-foot Colorado Center in Santa Monica, and in 2018, paid $616 million to buy the Santa Monica Business Park from Blackstone Group.

“This marks Boston Properties’ third investment in the L.A. region since entering the market in 2016 and provides a fully-entitled site, located in a desirable submarket to support future development,” said Owen Thomas, CEO of BXP, in a statement.