Goldman will fund 70 percent of the five-year, floating-rate loan 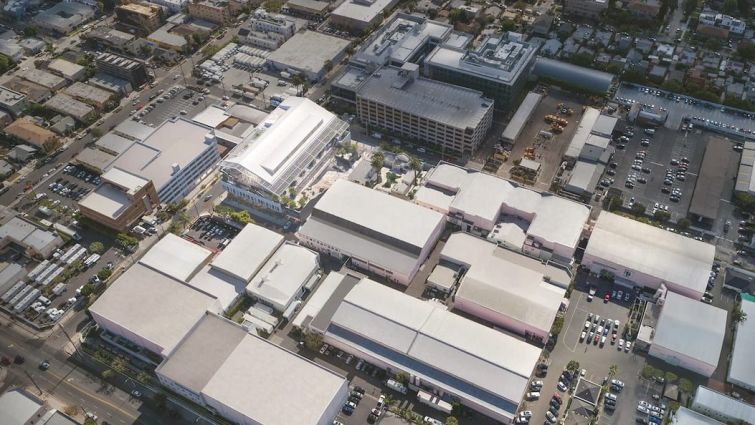 The Harlow creative office is currently under development at Sunset Las Palmas Studios. It will include 128,000 square feet of space at 1001 North Seward Street. Rendering: HPP
Previous Next

Goldman Sachs and Barclays teamed up on the $900 million loan for Blackstone’s blockbuster deal with Hudson Pacific Properties to recapitalize three major filming studios and modern office space in the heart of Hollywood.

Blackstone announced earlier this week that it’s acquiring a 49-percent stake in Hudson’s 2.2-million-square-foot Hollywood Media Portfolio, which includes major leases with premier tenants like Netflix. Commercial Mortgage Alert reported the details of the financing. The transaction values the space at $1.65 billion.

Goldman is leading the financing and will fund 70 percent of the five-year, floating-rate loan to the joint venture, according to CMA. They plan to securitize the amount in a stand-alone commercial mortgage-back security offering.

Hudson, the Los Angeles-based REIT, will retain a 51 percent interest and continue to maintain and operate the properties. The portfolio includes Sunset Bronson, Sunset Gower, and Sunset Las Palmas Studios, as well as 966,000 square feet at notable Class-A office properties adjacent to the studios, including 6040 Sunset, ICON, CUE, EPIC and the soon-to-be-completed Harlow development.

Filming production in L.A. is supposed to ramp back up this month. Studio occupancy has been rising the past few years, and the gap in production from shelter-in-place orders is expected to bolster demand for filming stages. Greater L.A. has at least 334 certified sound stages and a combined 5.7 million square feet of production space, according to FilmLA, the nonprofit group that handles permits for L.A. County. That is almost as much as the market’s top five competitors combined.

Netflix said it will spend $17 billion on original content in 2020, and forecasts another 7.5 million new subscribers in the second quarter. Last month, Eric Willett, CBRE’s regional director of research, said the region’s creative industries comprise 15 percent of the area’s employment base, and the filming hiatus “has created immense pent-up demand for production space.”