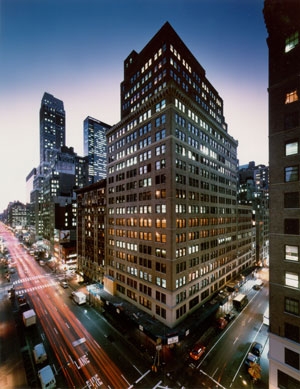 A partnership between George Comfort & Sons, Loeb Partners Realty and J.P. Morgan Asset Management has refinanced their office building at 498 Seventh Avenue with a $400 million loan from MetLife.

This financing retires roughly $181.7 million in existing commercial mortgage-backed securities (CMBS) debt originated by Deutsche Bank in April 2011 that had been securitized in the DBUBS 2011-LC2 transaction; the original, securitized balance was $200 million, a loan George Comfort and Loeb Partners used to refinance the property that year.

Along with the paydown, this new loan from MetLife, which closed on May 1, included $218.3 million in fresh bridge debt, according to city mortgage records. Commercial Mortgage Alert first reported news of the deal.

A representative for MetLife declined to comment on the transaction.

In April 2011, Deutsche Bank was assigned roughly $171 million in existing debt on the asset from German financier Westdeutsche ImmobilienBank AG, a subsidiary of Aareal Bank Group, and then originated just under $29 million in new bridge debt to bring the total to approximately $200 million, which was eventually securitized that month, according to CMBS data from research firm Trepp. Just a few months after the original joint venture nabbed its CMBS refinance, J.P. Morgan Asset Management bought a stake in the asset for $205 million in July 2011 from Ivanhoe Cambridge, according to data from CoStar Group.

Loeb and George Comfort bought the asset in March 1997 when it was just 50 percent vacant. After the 1997 acquisition, the joint venture underwent a campaign of renovations at the property, remaking the new lobby, adding new windows and renovating the HVAC system and elevators, as per Loeb’s website. The original acquisition was “financed with a bridge [and] acquisition loan that was most recently financed in 2011 for a principal amount four times that of the original loan,” as per Loeb’s website.

Built in 1920 and last renovated in 2010, the 960,000-square-foot asset — between West 36th and West 37th Streets — is currently 95.5 percent leased to a range of tenants, as per CoStar data. George Comfort currently handles leasing and property management at the site.

The property hosts Transfix, a tech startup founded in 2013 that’s focused on freight shipping brokerage services and has been called the “Uber of trucking.” In April 2018, Transfix expanded from 30,000 to just over 60,000 square feet at the property, moving from a “sub-sublease” to a direct lease that allowed it to grow its presence from one floor to two, as CO previously reported. And in 2017, George Comfort leased out 580,000 square feet to 1199 SEIU Healthcare Workers East, filling space that was left vacant when advertising giant GroupM left to take 690,000 square feet at 3 World Trade Center.

Engineering consultancy firm Cosentini Associates moved into just under 60,000 square feet across the 14th and 15th floors in March, according to CoStar, and machine learning and data firm CB Insights and engineering company Hazen and Sawyer have leased just over 43,000 and 31,400 square feet, respectively. There’s also a Chase Bank branch occupying nearly 7,000 square feet on the ground floor.

The building sports floor plates in the range of 30,200 to 48,000 square feet, along with the large ceiling heights, according to George Comfort’s website. It also features outdoor space, a new private lounge in the lobby as well as a coffee shop and café and around 35,000 square feet of ground floor retail space. The building also offers lobby entrances on 36th and 37th Streets as well as on Seventh Avenue, according to information from a property brochure on George Comfort’s website.