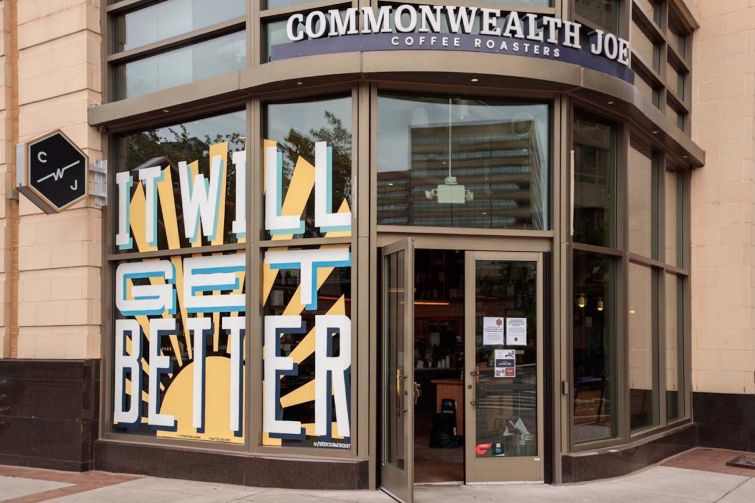 In an effort to enliven the local streetscapes around National Landing during the COVID-19 pandemic, The Crystal City Business Improvement District (BID) has launched #LoveNationalLanding, a new art campaign that highlights the work of area businesses and local artists.

“The BID is constantly exploring ways to foster a sense of community and show support for area businesses,” Tracy Sayegh Gabriel, president and executive director of the BID, told Commercial Observer. “Our efforts include placemaking, public art, beautifying the public realm and community-building programming. Our #LoveNationalLanding campaign touches upon each of these objectives.”

“Times like these have forced all of us to find new and exciting ways to sustain the neighborhood’s traditional vibrancy,” Gabriel said. “We have animated several storefronts with eye-catching and uplifting designs including flowers in bloom, a rising sun and birds in flight, all of which are meant to signify our community’s resilient nature. Our hope is that the initiative will serve as a source of inspiration to those who live, work and visit National Landing.”

Among the restaurants and retailers who have seen their facades transformed by the art include Commonwealth Joe, Enjera, Freddie’s Beach Bar, Jaleo, Los Tios and Vintage Dress Company.

The reimagined storefronts are just the beginning of the #LoveNationalLanding initiative.

“Over the coming weeks, two oversized welcome boxes will be transformed with eye-catching vinyl wraps, and 100 sidewalk decals featuring positive and amusing messages will be scattered throughout the neighborhood,” Gabriel said. “Local muralist team Brocoloco is designing these elements.”