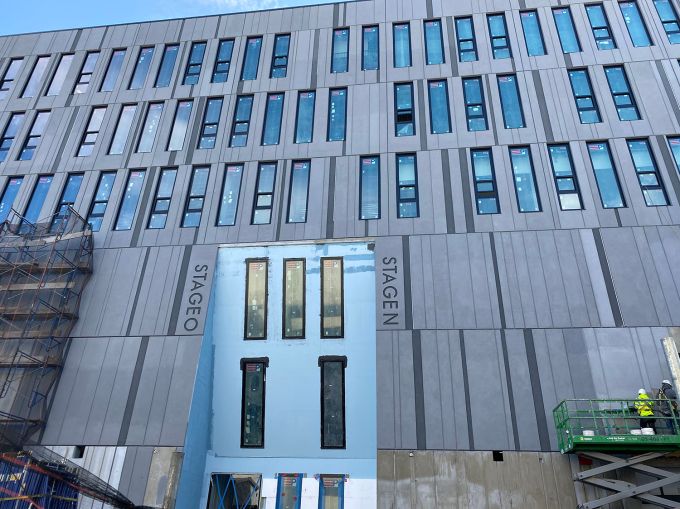 Construction is nearly complete on a new four-story building on the Kaufman Astoria campus in Queens. Photo: JRT Realty 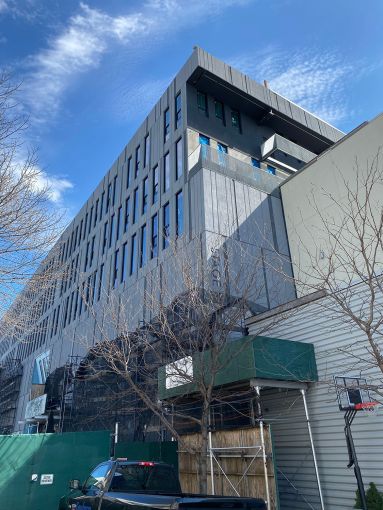 The building will feature two soundstages on the ground floor along with support space for production and commercial office space on the upper floors. Photo: JRT Realty 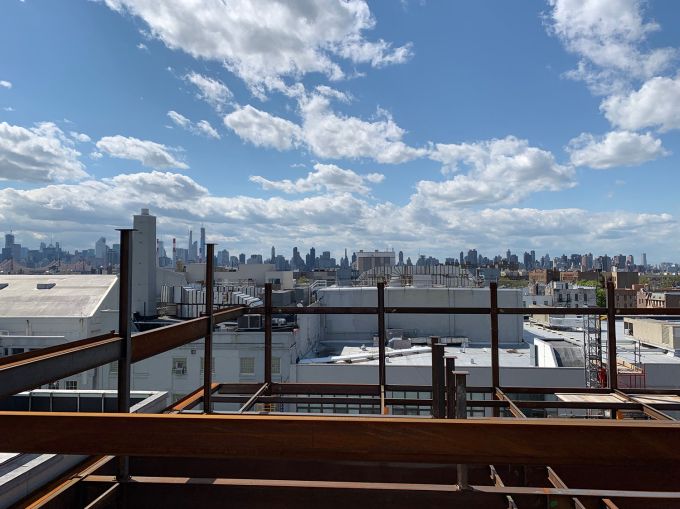 Views from the top floor of the building will be stunning because the structure is taller than most of the surrounding properties in Astoria. Photo: JRT Realty 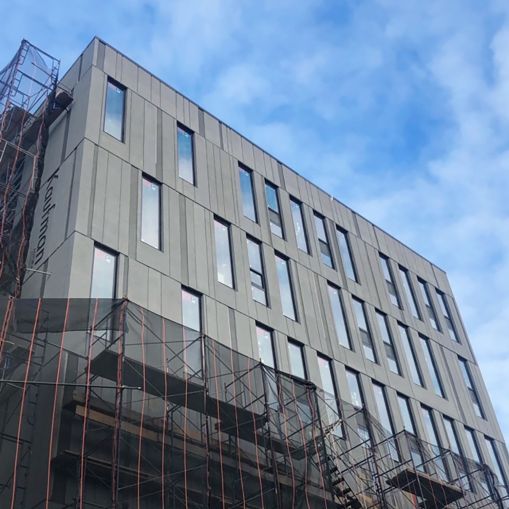 The facade had to be fully soundproofed so outside sound wouldn't disturb production. Photo: JRT Realty 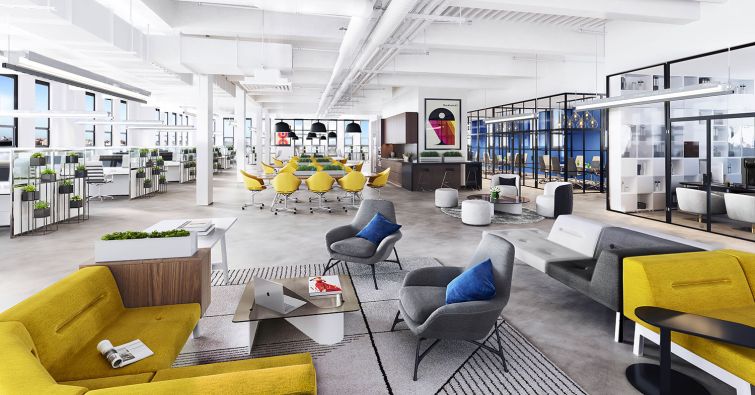 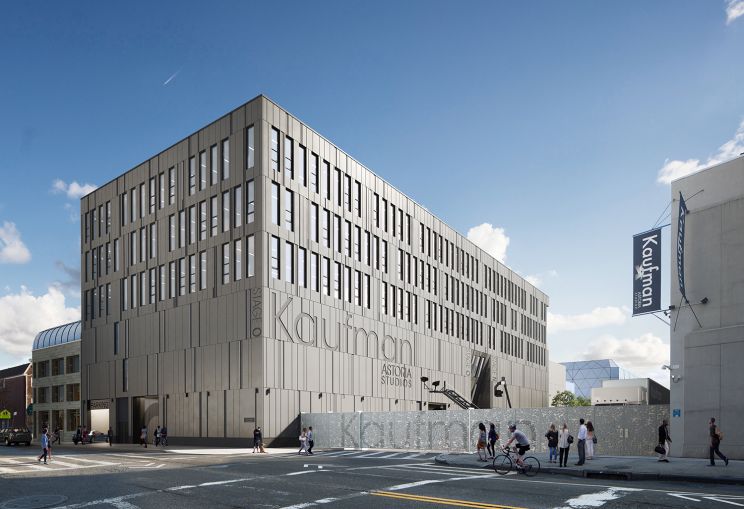 GLUCK+ designed the building, which has parking with stackers in the basement and includes a number of soundproofing measures between floors. Image: Volley Studio 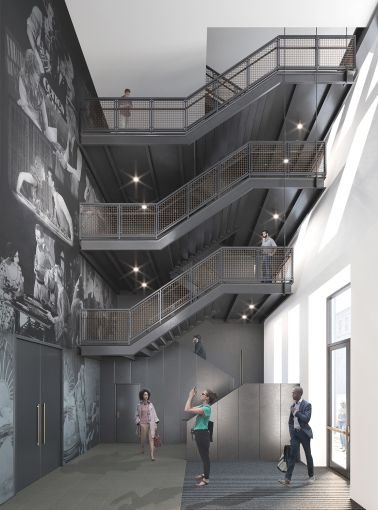 The lobby will feature a grand stair and a large mural commemorating the history of the studios. Image: Volley Studio 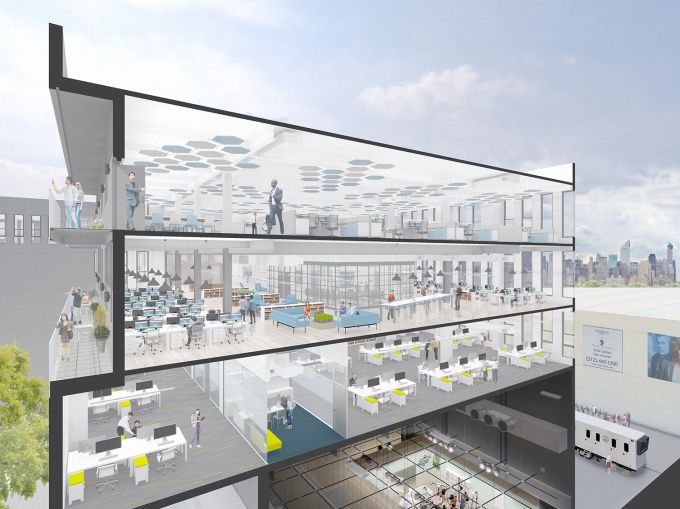 The building is L-shaped, with the soundstages and support spaces in one section of the building and office spaces on the other side. Image: GLUCK+
Previous Next

When Kaufman Astoria Studios decided to expand its landmarked 1920s campus in western Queens, it wanted to build something that could serve as a sound stage and office space, even for companies that aren’t involved in film production.

It hired architecture firm GLUCK+ to design a new four-story building that includes 40-foot-tall soundstages on the first floor and offices on the upper stories. Stacie Wong and her team at GLUCK+ decided to make the building L-shaped, so that the soundstages and their support spaces would occupy the long part of the “L”, while commercial offices would be in the shorter part of the building.

The ground floor has two soundstages, Stages O and N, totaling roughly 25,000 square feet. Directly above the stages on the second floor are makeup, prop and dressing rooms with showers, and above that on the third floor are production offices. The remaining portions of the second and third floors, along with the entire fourth floor, will host 65,000 square feet of commercial office space. Both the production and traditional office sides of the building will have terraces on the third and fourth floors.

Construction was a few weeks away from completion when the state suspended work at most sites due to the coronavirus outbreak.

Soundproofing the whole building to ensure that it wouldn’t affect production on the ground floor was a huge challenge, said Wong.

“For a production stage you are trying to create an acoustically sealed box,” she explained. They had to figure out how to block out exterior noise from the city and noise from inside the building, whether it’s the sounds of cars from the basement parking garage or footfalls from people walking upstairs. The stage itself is surrounded by 12-inch-think masonry block walls, faced with insulation and then exterior cladding for the facade.

The ceiling of the below-grade parking garage was sprayed with acoustically absorbent material. Acoustic padding was installed beneath the flooring throughout the building. Even the ventilation ductwork for the HVAC system had to be specially lined so it would not carry noise. The plumbing was also isolated in its own concrete slab so that the noise of water wouldn’t disturb the soundstages.

“We had to make sure there was no structure-borne noise,” explained Wong. “We had to make sure no noise was transmitting through the columns. In the cellar, you basically are encasing the steel in concrete. It’s mass and weight; those are the things that absorb sound.”

As for the offices, Kaufman Astoria CEO Hal Rosenbluth said he wanted to market to creative companies that are looking outside Manhattan. Asking rent is in the $50s per square foot, and JRT Realty’s Ellen Israel, Greg Smith and Lauren Calandriello are handling the leasing.

“We’re dealing with a generation that wants to stay in the city,” he explained, emphasizing the multiple train lines nearby and easy access from elsewhere in Queens and Manhattan. “They want to ride their bike to work and they don’t care whether their jobs are in Manhattan or not. Whether it’s a media company, an architecture company, anyone who’s dealing with creative services.”

He added that being behind security gates and being located in a less dense, residential area might be a draw for a lot of companies, especially in the wake of coronavirus.

“The area is yearning to keep growing,” he said of the studio complex’s location on the Astoria-Long Island City border. “We have the butcher, the baker and the candlestick maker. All of the services of a residential neighborhood are there.”