With the pandemic raging, real estate dealmakers scrambled to get deals over the finish line as the world shut down around them. 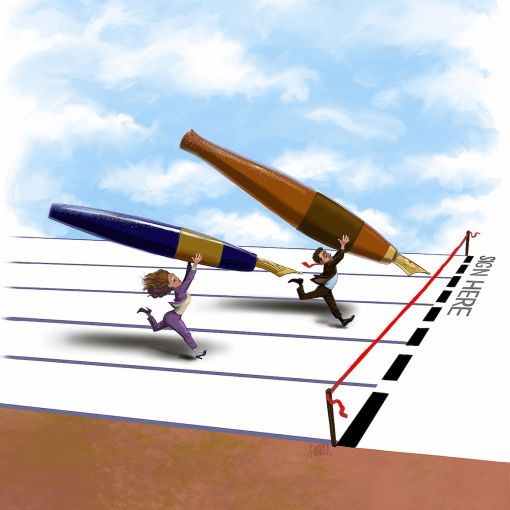 On a late March morning, a moped rider in a surgical mask rode sixty blocks up Manhattan’s deserted streets to the Upper East Side. There, the rider met his lawyer in the lobby of a residential building. The lawyer placed a sheaf of documents on a table and backed away, then watched his client approach and sign them, before stepping back.

Without any contact between them, the documents for the eight-figure refinancing of the client’s property, were signed, notarized, and FedExed to the lender.

It was the only way to close a real estate deal in a locked down city.

“People are being very creative when they find the willingness to close,” said Yariv Ben-Ari, a real estate lawyer with Herrick Feinstein who helped organize the refinancing.

As the threat of the novel coronavirus grew more acute over the course of March, lawyers and brokers, buyers and sellers, owners and tenants, scrambled to get deals over the finish line as the world shut down around them. While many of the deals closed successfully, albeit minus the handshake and with some adjusted terms, many others did not. Term sheets were pulled, loans repriced, lease deals paused, and rates recalculated, as numbers agreed to one day become laughable the next.

This was true for large blockbuster deals, and thousands of smaller ones in leasing, finance, and investment sales. Silverstein Properties closed on a $510 million refinance for 120 Broadway, while the Chetrit Group reportedly pulled out of an $815 million deal with SL Green for the Daily News building in Midtown, when their financing fell through.

But as the market experiences shock after shock, and the prospect of a monthslong shutdown hardens into reality, the deals are dwindling. The ones that are crossing the finish line are generally either deals that were already in the pipeline, or where the timeline isn’t very flexible, such as 1031 exchanges—a program that defers capital gains on a sale if the funds are reinvested within 180 days—maturing loans, or acquisitions with a deposit at stake.

Karly Iacono, a broker at Marcus & Millichap who specializes in net-lease deals, said the deals that are still getting traction are either situational buyers who have to transact despite the market, or deals that are squarely within a company’s comfort zone.

Just last week, Iacono put a Rite Aid-anchored property in Elmira, N.Y. on the market, and closed on a 20-year net-lease for a KFC. “The tenant’s dining room is not opened, so that’s a challenge, but the buyer is choosing to move forwards because they’re in a [1031] exchange; we were close to closing already, and they’re realizing that this is temporary.”

While the world won’t be exactly the same, the real estate fundamentals on a deal like this aren’t going to change, either, Iacono said. “It’s a long term hold for them, and they’re thinking, let’s not be reactionary of what’s happening in the next two months, let’s think about this longer time horizon.”

As for the Rite-Aid, Iacono received three competing offers within two days of listing the property, and hoped to have an accepted offer by the end of the week. “We really battled with whether we even bring this to market or don’t,” Iacono said. “We decided that this was an asset class and a tenant type that still was going to get a lot of interest.”

More generally, however, Iacono says, it shows that buyers are ready to move on transactions that fall within their strategy.

“Everyone has different investment strategies,” she said. “If there’s a deal that’s really perfectly aligned with that client strategy, and they see it come to market, and they have liquidity or access to capital, then they’re still going to move forward.”

One such deal, which was already in contract, was the Kaufman Organization’s acquisition, together with AXA Investment Managers, of 56 West 22nd Street in Flatiron. The $48 million deal went into contract in January and closed in late March.

The deal is in line with Kaufman’s existing strategy of buying value-add office properties around Flatiron, and is similar to a purchase Kaufman and AXA made in November. “There’s really been a strong effort to make investment in this little sub-pocket,” Michael Kazmierski, a principal of Kaufman Investments, said.

The only thing different in closing the deal, he said, was that it required a high level of coordination since everyone was working from home. And crucially, it was an all-cash deal, so that simplified the process. “The intention was always to do this on an unlevered basis,” said Kazmierski. “It was not a byproduct of the times.”

And that’s a big caveat. For many, access to capital is frozen the moment, and it’s difficult to price anything when there’s so much uncertainty as to how this will play out, and when the economy will resume.

Ben-Ari said he’s been moving forward on several refinancings for multifamily and hotel properties, and while lenders are being more conservative, they’re also being cooperative. “We’re seeing that lenders are recognizing that these are short-term challenges. We’re exploring ways to address that with cash flows and reserves to make sure the owners can ramp up again, lenders don’t have to worry about defaults in the short term.”

Ben-Ari said one of his deals fell through when the buyer couldn’t fly in from overseas to see the property, while Iacono had a net-lease deal for a property occupied by a Starbucks, that ran into a crisis in late March. One hour before the due diligence period ended, Starbucks called its landlord to say they would not be paying April rent, essentially blowing up the entire deal. Eventually, the buyer and seller agreed on a 30-day pause. If Starbucks starts paying rent within 30 days, it triggers the five-day closing period, and if they don’t, the buyer has 30 days to reconsider, per Iacono.

Ronnie Levine, a broker with Meridian Capital Markets, said he’s still closing deals every day, mostly refinancings or acquisitions that were already in contract, since they’re on a timeline.  “Most liquidity right now is in the multifamily sector, followed by the office sector,” Levine said. “You’ve got the agencies as well as banks who are active in lending on multifamily, but with different underwriting criteria than previously.” He’s also been advising clients who have deposits on the line, and are deciding whether it’s worth moving forward under current terms or losing their deposits.

The leasing side is grimmer. “Leases that were being negotiated just stopped — about half of the leases are not going to go forward,” said Scott Harmon, the founder of leasing software Swivel. Not only that, but tenants who signed leases in recent weeks were looking for ways to cancel or renegotiate them, he said. The impact was immediate with office leasing in Manhattan experiencing its worst quarter since 2013, according to a report from Colliers. Leasing volume in the first quarter was down 50 percent compared with the previous quarter, and down 25 percent compared with the first quarter of 2019.

When it comes to the financing of deals, things are moving along for some transactions and at a complete standstill for others. The majority of lenders CO spoke with said they were honoring deals in their pipelines but proceeding with caution when it comes to future lending opportunities, the general consensus being that sponsorship remains key and each deal is being assessed on a case-by-case basis. Brokers said that traditional lenders are in the strongest position today, as are non-traditional lenders who aren’t highly levered.

And, while some lenders are putting finance activities on hold, others are finding opportunity in the crisis. “We’re overwhelmed by the number of people that need money right now,” said one lender who spoke with CO on the condition of anonymity. “The opportunities are coming fast and furious, ranging from lenders backing out of deals completely to CMBS refinances where there’s no CMBS market to construction deals where the construction lender doesn’t want to fund draws so we’re being asked to take over the loan. It’s getting ugly out there.”

“It depends on the lender,” one professional from a top brokerage firm said under the condition of anonymity. “The CMBS market has shut down, the debt funds are hit or miss and life [insurance companies] are closing what they already have locked under application, which is great. Banks — if the borrower is a good relationship [of theirs] and the term sheet is signed, then these deals are going to fund. That said, if there’s a syndication component, banks are willing to close but they want an agreement that says if they can’t syndicate the loan within 120 days they can come back to the sponsor for additional economics.”

“Most of the market will close deals that are already signed up or near completion. But when it comes to future business, unless it’s either a really compelling opportunity or borderline distressed [property] and they like it for that reason, people are focusing on triaging their existing portfolio rather than putting out new debt.”

While a string of smaller deals have proceeded to close over the past few weeks, there have also been some whales that crossed the finish line.

On March 13 (a Friday, no less), in the midst of market volatility, Silverstein Properties and UBS Realty Investors wrapped a $510 million refinance for their 2-million-square-foot office and retail property at 120 Broadway.

Burger actually had the coronavirus at the time the deal closed although he didn’t receive confirmation that he had tested positive until a day later. He had experienced symptoms not long after his annual ski trip, which was from March 4 through March 8 in Vail, Colo., and attended by some of the biggest names in the real estate industry. Burger experienced mild symptoms and was released from quarantine on March 27.

“Wells Fargo lived up to their side of the deal. We closed as per the term sheet and as per the documents and there were no re-trades in the middle of a crazy market,” Burger said. “So, hats off to Wells for viewing us as a good, sophisticated client and keeping their word in getting this deal done in a market where there were many wild re-trades happening.”

Then, there was the $421.5 million loan secured by Starwood Real Estate Income Trust for its acquisition of 60 State Street in Boston. Two life insurance companies, Pacific Life and Metlife answered the call of the borrowers.

Elsewhere, smaller deals have continued to be pushed through. For example, in a deal that was sealed just before the CMBS market truly shuttered, UBS provided a $29 million CMBS loan on the Naugatuck Valley Shopping Center in Waterbury, Conn. on March 18.

And in Brooklyn, Synapse Development Group closed on the sale of a 99-year leasehold interest in 280 Meeker Avenue to CW Realty for an undisclosed amount. Chicago-based Mesirow Financial provided the debt.

Synapse founder and CEO Justin Palmer described the transaction as “one of the most challenging,” of his career “from a structural perspective but also because of the psychological component of what’s happening with the coronavirus. It’s a real testament to the team and the structure that was put in place. People were working 15- to 20-hour days in the run-up to the closing.”

The long-term aspect of the leasehold interest worked in the deal’s favor, Palmer said.

“Someone with a shorter investment horizon may have seen things differently, but our goal was always to set this up as a long-term hold and we’re thankful to see this through,” Palmer said.

UPDATE: The story has been updated to reflect that it was Manhattan’s office leasing market that experienced its worst quarter since 2013.