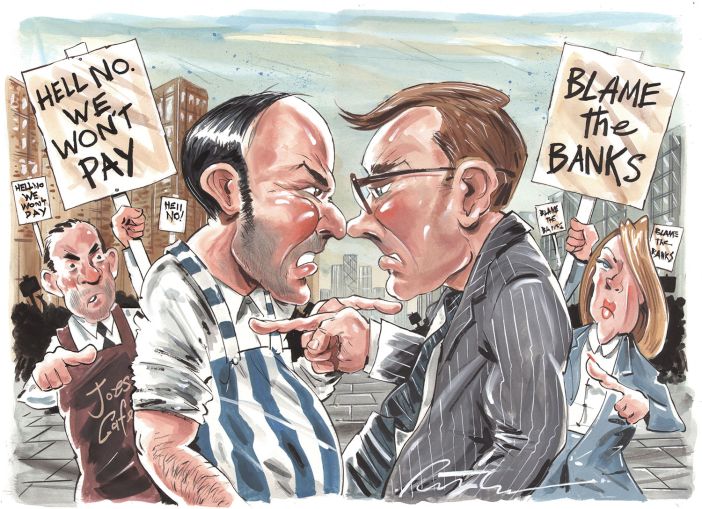 As the novel coronavirus pandemic forced retailers to shut their doors and office tenants to work from home, commercial landlords are facing a world where many tenants might not pay up when rent comes due tomorrow.

April 1 will mark the first rent day since New York has taken drastic measures to slow the spread of the contagious virus — including ordering all nonessential workers to remain home and restaurants to switch to delivery or take-out models — and many commercial tenants are telling their landlords they can’t pay.

SEE ALSO: Companies Pull Away Perks as Staff Return to The Office

“I expect there’s going to be an across the board tsunami of tenants not paying rent,” said Timothy King, the managing partner at Brooklyn-based brokerage SVN | CPEX. “If you’re a small tenant and you can’t use space for reasons beyond your control, it’s quite reasonable to say you shouldn’t have to pay rent. On the other hand, the guy that you’re not paying rent to has other bills to pay. There are a lot of other operating costs to buildings above mortgages.”

On the restaurant end, with the recently passed Coronavirus Aid, Relief and Economic Security (CARE) Act offering up forgivable loans to small businesses, owners have been notifying their landlords to warn them the rent won’t come in until the federal money does.

“Everybody should be calling their landlord and telling them that they’re going to be receiving federal funds for their rent and asking them to wait to pay rent until they receive their money,” said Max Katzenberg, the co-owner of Prospect Heights’ eatery Olmsted who co-founded the New York Hospitality Coalition earlier this month to advocate on behalf of restaurants during the coronavirus pandemic. “We’ve had that conversation with four landlords and they’re all really understanding.”

“This is a natural disaster and everybody needs to have an enormous amount of empathy and patience,” he added.

And it’s not just smaller eateries who won’t pay up. Restaurant chain The Cheesecake Factory’s CEO David Overton sent a letter to the landlords of its nearly 300 outposts in the United States stating that it won’t pay rent because the “severe decrease in restaurant traffic has severely decreased our cash flow and inflicted a tremendous financial blow to our business,” Eater reported.

Alex Victor, a partner in the restaurant and hospitality group at law firm Davidoff Hutcher & Citron, has said nearly all of his retail clients have said they won’t be able to pay the rent but that landlords have been willing to work with them on it.

“Every business is going through triage right now, everyone’s cutting staff and furloughing people,” Victor said, “It sort of behooves everyone to use this unprecedented opportunity and work together to do something.”

The CARE Act does help with loans for small businesses to pay rent, but Victor said it will only become a forgivable loan to companies who maintain their payroll — which many restaurants can’t do because they’ve slimmed down or temporarily closed — and won’t help everybody.

“There’s not going to be a complete pot of gold to pay the landlord, but it should free up something,” he said.

And it’s not just on the retail end. The Durst Organization has heard from a number of retail and commercial tenants who lease space in its portfolio that they’ll have trouble making the rent payments, a company spokesman told Commercial Observer.

“We have heard from some tenants and are working on plans to help those who need it,” Eric Gural, the co-CEO of landlord GFP Real Estate, told CO in an email. “We hope they will apply for help through the stimulus package to keep things afloat, and then we will move on from there. Our message is we don’t want to put anyone out of business but at the same time the tenants shouldn’t expect to put us out of business.”

Brokers and lawyers have been telling clients to notify landlords as soon as possible about potential issues making the rent payment to see if they could work out some arrangement.

“What we advise tenants is to communicate with their landlord first and foremost,” said Chris Havens, a veteran Brooklyn office broker at TerraCRG. “It’s wise to communicate and to get this agreed in writing and not do unilateral or uncommunicative actions.”

On the landlord end, Havens has preached understanding with tenants especially since evictions have been halted in the state, and finding a new tenant during a global pandemic would prove challenging.

“If you think a tenant will survive, you’re much better off working with them,” Havens said. “You want to keep your tenants if you can right now, and it’s not like the market was red-hot this winter.”

Victor’s clients have floated the idea to landlords of a complete rent abatement then later taking on the missed payments, or burning through their security deposit, or having a partial rent break during this time. One thing he advises is not sending a check all together with no prior contact.

King has also been telling clients to not pay up without telling their landlord first, but that landlords should have some understanding because the market — especially on the retail end — should look very different whenever things normalize.

Not everybody has been so understanding. Coworking giant WeWork — which rents space from landlords then offers it up to companies under flexible terms — has come under fire from some members for keeping all of its New York City locations open and still charging members fees.

“They are putting all the members’ lives at risk while trying to keep their employees safe at home just to continue to profit off many small business owners,” a WeWork member for more than two years wrote in an email to CO.

A spokesman for WeWork did not immediately respond to a request for comment, but Marcelo Claure, the executive chairman of WeWork, wrote on Twitter that the company has an “obligation to keep our buildings open.”

“In the same way we expect certain businesses to remain open for us — whether it be a fulfillment center to send us a package, a bank so we can handle finances, grocery stores and pharmacies who supply us our values goods — we, too, have members counting on us to remain open so they can run their companies to generate revenue, pay their people and continue serving their customers,” Claure wrote.

Mall owner Taubman Centers told its tenants they’re still on the hook for rent and another New York City landlord told CO that he still expected his tenants to pay up tomorrow.

“Our tenants are expected to meet their lease obligations,” said David Zar, a principal at Zar Property NY. “We are unable to offer any rent deduction or abatement as our own property taxes, debt and utility payments are still due on time.”

For restaurants — which have had to lay off thousands of employees around New York City recently — Rigie and Katzenberg are pushing for the government to figure out a way to forgive rents during this time so owners won’t be stuck with a mountain of back rent.

“There’s no way most restaurants and bars are going to be able to pay back months of missed rent,” Rigie said. “We need to find a responsible way to instigate rent forgiveness.”