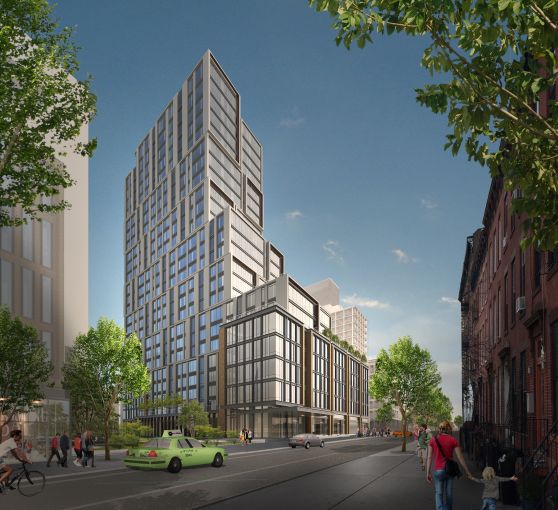 Chelsea Piers inked a deal to open a 103,000-square-foot field house and fitness center at TF Cornerstone’s residential development at Pacific Park in Brooklyn, the developer announced this week. The move comes after local residents pushed back against the project

The company behind the sprawling Chelsea Piers complex in Manhattan signed a lease for the space at the base of the 595 Dean Street development, between Vanderbilt and Carlton Avenues in Prospect Heights, the New York Post first reported. A spokeswoman for the developer declined to provide terms of the deal.

Chelsea Piers’ plans call for a field house with indoor soccer fields, gymnastics, and a “learn-to-swim” pool, according to TF Cornerstone. It will offer classes, camps and afterschool programs out of the space. Chelsea Piers plans to open at 595 Dean in 2023.

The deal marks Chelsea Piers’ second stand-alone gym in Brooklyn after it opened one in 2018 at TF Cornerstone’s 33 Bond Street in Downtown Brooklyn.

“We’re proud to partner with Chelsea Piers at Pacific Park and continue our relationship with this New York institution,” Steve Gonzalez, the senior retail leasing director for TF Cornerstone, said in a statement. “At Pacific Park, Chelsea Piers will now bring its family-friendly Chelsea Piers Field House to Prospect Heights, providing the community with an unparalleled space for youth sports and activities.”

The project is located near the up-and-coming row of restaurants and bars along Vanderbilt, and its neighbors include clay studio BKLYN CLAY and gym SevenBell Fitness.

The developer previously announced it wanted to bring a gym and field house run by Chelsea Piers to the site, but the plans came under fire by residents and local politicians who called to halt them until an environmental review was done, the Brooklyn Daily Eagle reported in April 2019.

Critics argued that because the Pacific Park project received millions in subsidies a for-profit gym wasn’t enough of a public benefit, but the Empire State Development Corp. greenlit the project in August 2019, according to the Brooklyn Daily Eagle.