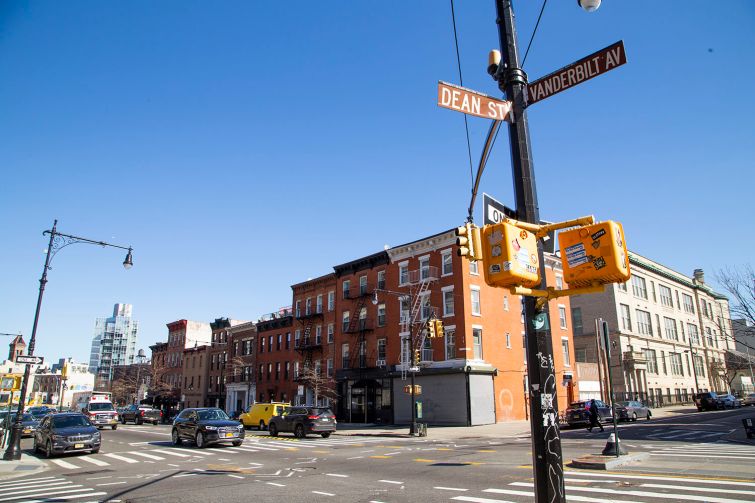 Stepping into Ciao, Gloria, a buzzy, new, all-day café and bakery in Prospect Heights, is a bit like taking a vacation to Venice. (Venice, Los Angeles, that is.)

With floor-to-ceiling windows that drench the space with sun, a menu that includes hearty sourdough toasts piled high with ricotta and drizzled with honey, and a laid-back, friendly vibe, the café comes across as more “beach” than Brooklyn.

But then again, it is located on Vanderbilt Avenue.

This stretch of street — from roughly Park Place to Pacific Street — has become, in the past four or so years, ground zero for an eclectic group of restaurants, ranging from cult farm-to-table spots to innovative Mexican approved by the Michelin Guide. And while their cuisines may be disparate, all of them are attracting diners in droves. Where once there were simply local watering holes and good-enough neighborhood cafes, there are now fine dining restaurants that can command waits of nearly two hours for a table.

So, what is the secret sauce that has drawn so many successful concepts to this group of five blocks?

Restaurant owners will often point to the fact that the neighborhood retains a palpable feeling of “old” New York (and lower rents to match), which originally drew neighborhood mainstays like Mitchell’s Soul Food and Middle Eastern spot Zaytoon’s. But there is one catalyst that truly changed this pocket of Prospect Heights into a destination for diners: Olmsted.

Ask any self-proclaimed foodie what their favorite restaurants are in Brooklyn, and, chances are, this farm-to-table spot at 629 Vanderbilt will be on their list. Boasting innovative dishes like tagliatelle pasta made out of rutabaga, and a large, Instagram-worthy backyard garden strung with fairy lights, it has been more or less mobbed since it opened in 2016.

“Olmsted is the Neighborhood Restaurant We’ve All Been Dreaming Of,” proclaimed the headline on Ryan Sutton’s three-star review in Eater New York, and, it seems, the neighborhood agreed with him.

“Vanderbilt Avenue came to us!” said Katzenberg. “When this space for Olmsted was proposed to us, we were not all that familiar with Prospect Heights. [But,] immediately upon visiting, we fell in love with the neighborhood: streets buzzing with people in the evenings, multiple major subway lines within less than five minutes’ walking, relatively affordable rent in comparison to anything north of Atlantic Avenue, the proximity to Barclays Center, and, of course, the backyard setting that we knew could become a garden.” Katzenberg also noted that many restaurant spaces along Vanderbilt have usable rear outdoor spaces: “That’s very rare for New York City,” he said.

The response to Olmsted was so positive that when Baxtrom and Katzenberg began contemplating locations for their second concept, a French yakitori restaurant called Maison Yaki, they didn’t look far. And they landed even closer: 626 Vanderbilt Avenue, across the street from Olmsted.

“The opportunity to have our second place right across the street made sense on so many levels,” said Katzenberg of the restaurant, which opened last summer. “We could easily go back and forth between the two, and it allowed us to continue to invest in a neighborhood that we’ve become a part of and truly love.”

It wasn’t long after Olmsted’s opening that other high-profile restaurateurs began to see Vanderbilt as the perfect blend of trendy Brooklyn mixed with old-school charm. Chef Akhtar Nawab, who once helmed the burners at Gramercy Tavern and Craft, opened Mexican spot Alta Calidad in early 2017, garnering a Michelin Guide Bib Gourmand recognition the following year.

“We’ve definitely seen an increase in foot traffic every year,” he said. And with more people, there are more openings, which Nawab welcomes. “Restaurants are different than shoe stores, for example,” he said. “Every new opening brings more people and more saturation.”

Chandler Slate, senior director at Tri State Commercial, also notes it’s not only the increasing amount of people, but the changing demographics that have helped the restaurants on Vanderbilt to succeed.

“The area has attracted a very stable clientele base of young families,” Slate said. “Its proximity to Prospect Park and choice of subways make it an ideal place to live. And naturally, this is going to lead to a fertile area for successful restaurants to grow.”

In just the last year, Slate saw commercial rents in the corridor rise 12-15 percent, and predicts that will continue for the next one to two years before stabilizing. According to Peter Schubert, managing director at TerraCRG, rents hover around $100 a foot, but can rise higher closer to Dean Street, where the new condominium complex at 550 Vanderbilt sits. It is home to Ciao, Gloria on the ground floor, as well as locations of popular ice cream shop Van Leeuwen and craft brewery bar Beer Street.

“It’s a more compelling driver for new concepts coming to the Avenue, but the momentum is already there,” Schubert said of the building.

The condo will not be the only new construction that may increase foot traffic (and potentially rent), however. The building is part of the mega Pacific Park development, which, when completed, will encompass 6,430 units of housing (including 2,250 that qualify as affordable), plus office space, retail, community facilities, and eight acres of publicly accessible open space. While 550 Vanderbilt is the only building directly on Vanderbilt — the rest stretch westward towards Flatbush — there is no doubt that as they open, the popularity of the street will only rise.

In the meantime, savvy owners continue to fill in the gaps in the food and beverage offerings on the street. One of the buzziest openings of the summer was LaLou at 581 Vanderbilt, a wine bar with a robust food menu opened by partners and industry vets Ilyssa Satter, Dave Foss, and Joe Campanale.

“Although there are three wine retail shops within five blocks on the avenue, there wasn’t already a wine bar, so we felt like there was something we could offer the community that didn’t otherwise exist,” said Satter. She also echoed many of her peers: Part of what has made Vanderbilt unique among dining streets is the provenance of its diners. “We find that so many of our customers at LaLou are from the neighborhood,” Satter said. “That’s different from the restaurants Joe operated in Manhattan [dell’amina, l’Artusi], where so many of the dining rooms were filled with guests from all over the city. The businesses along Vanderbilt are very much supported by the people that live here.”

Ciao, Gloria, which opened in October, similarly filled a need in the neighborhood for an all-day café with a heavy emphasis on high-quality baked goods. Owner Renato Poliafito is another example of an industry heavy hitter who recognized the value of a business on Vanderbilt. He is the co-founder of Baked, a bakery which is widely credited with ushering in a new era of cool in its Red Hook neighborhood.

“Prospect Heights is kind of the perfect neighborhood for what I want to do,” he said of his concept. “And I felt that there was a lack of what I am doing in the area; there was nothing that was a bakery, coffee shop, and café all in the same place.” Judging from the crowds at brunch time, Poliafito was, once again, correct.

The denizens of Prospect Heights are, of course, quite pleased to not have to leave the neighborhood for a decent bite. Josh M. Bernstein, a beer writer, has lived in the area since 2003, and sees this current boom, as led by Olmsted, showing that “neighborhood-focused fine dining can succeed in a neighborhood like this and then draw more people there as well. There is [now] whatever you want, at whatever time of day, and whatever experience you’d like,” he told Commercial Observer.

Finally, it seems, this understated enclave is getting its due.

“Let me put it this way: The cool new spots seem to be opening on Vanderbilt, not on Seventh Avenue in Park Slope,” said Rachel Tepper Paley, a resident and food writer for outlets like Bon Appetit and Travel & Leisure. “Overall, the new openings have made Vanderbilt Avenue feel very alive and dynamic. It’s truly wonderful that ‘staying in the neighborhood’ and ‘doing something cool’ aren’t mutually exclusive.”