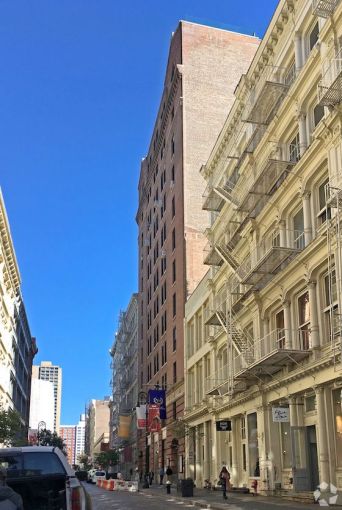 London-based co-living company The Collective will move its New York City offices to the penthouse of the Soho Building, the company announced this week.

The Collective inked a sublease with Leanplumfor the 9,397-square-foot duplex space on the 12th floor and penthouse of SL Green Realty Corp.’s 110 Greene Street between Spring and Prince Streets, the New York Post first reported.

Terms of the deal were not available, but CoStar Group data shows asking rents in the 13-story 110 Greene Street are around $80 per square foot.

The Collective — which was founded by Reza Merchant in 2010 — opened its New York City offices in 2018 and its first location in the United States at the former Paper Factory Hotel in Long Island City, Queens in October 2019.

Aside from the Long Island City location, The Collective is also planning ground-up co-living developments at 292 North 8th Street and 555 Broadway in Williamsburg and 1215 Fulton Street in Bed-Stuy.

CBRE’s Alexander Golod and Neil King represented The Collective in the deal. It’s unclear who the sublandlord was or its brokers.

A spokeswoman for CBRE declined to comment and an SL Green spokesman did not respond to a request for comment.

Update: This story has been updated to show the deal was a sublease.