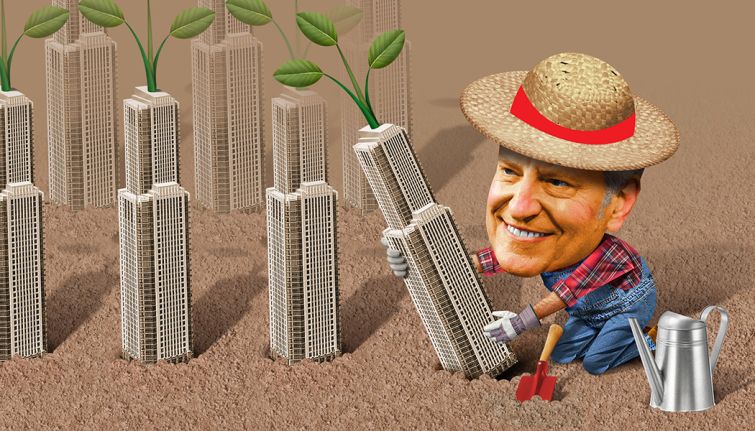 In May of 2019, New York City passed the Climate Mobilization Act, a nine-bill package representing some of the most ambitious climate legislation enacted by any large municipality in the world to date.

The centerpiece of the act is Local Law 97 (LL97), which will require some of the city’s largest landlords to begin cutting their properties’ carbon emissions by 2024, with cuts of 40 percent required by 2030 and cuts of 80 percent by 2050. Building owners who fail to hit these benchmarks could face millions of dollars in annual fines.

Though reducing carbon emissions presents various challenges for landlords, New York’s major real estate players have by and large voiced support for this goal in the abstract. As for how the industry feels about LL97 specifically — well, the devil, as they say, is in the details.

Tasked with working out many of those details will be the freshly minted members of the New York City Climate Advisory Board, a group of 15 area muckety-mucks including Empire State Realty Trust’s Anthony Malkin and Jaros, Baum & Bolles’ Scott Frank, whose know-how the city will put to work fleshing out and implementing the new legislation.

As per the law, the board was appointed in December by Mayor de Blasio and City Council Speaker Corey Johnson and includes figures representing a broad cross-section of real estate, environmental and organizational expertise. The group is responsible for putting together a report to be delivered to the mayor and speaker by the start of 2023 that will address all manner of questions around just how LL97 will work — ranging from how landlords should report emissions data to how the city should penalize owners for non-compliance to how it might structure an emissions offset program.

The board’s recommendations aren’t legally binding, but they are nonetheless expected to be influential, especially given how many of the law’s finer points remain to be nailed down.

“The board is tasked with addressing a number of really difficult issues that weren’t completely sorted out in the law and that need a lot of consideration,” said Gina Bocra, chief sustainability officer at the Department of Buildings and chair of the advisory board.

Bocra cited as an example the question of how, exactly, building owners will be instructed to calculate and report their properties’ carbon emissions.

“For instance, how does an owner account for tenant space that was unoccupied in a building during the year they were reporting,” she said. “Something like that is obviously going to impact their calculations and could, in this case, tilt things in their favor, but what we want is for them to give us an accurate representation of how the building is being used.”

As it happens, this touches on one of the major concerns building owners have expressed about the new law: that it could disadvantage more densely, intensively used properties.

The law’s hard emissions caps “don’t account for density of use,” said Jordan Barowitz, vice president of public affairs at The Durst Organization.

Durst stands to be significantly impacted by the new law. As Commercial Observer reported in May, the company’s LEED platinum-certified Bank of America Tower at One Bryant Park could be hit with annual fines of $2.5 million starting in 2024.

Advisory board member Jill Lerner, managing principal at architecture firm Kohn Pedersen Fox Associates, agreed that how to assess a building’s energy efficiency “is going to be a fundamental issue of discussion” for the board.

“The same owner could have two buildings, and if one is filled with law offices and the other is filled with a trading floor that has, you know, a much greater density of computers, for instance, it’s going to have much higher energy requirements,” she said. “I think there are other metrics besides just square footage [to consider].”

On the flip side, some groups that pushed for LL97 are looking to the advisory board to help ensure certain provisions don’t become loopholes that allow building owners to meet the letter of the law without meaningfully cutting emissions citywide.

For instance, the law calls for the advisory board to play a role in developing a greenhouse gas offset program, wherein building owners can purchase offsets against their emissions.

“From our perspective, it’s very important that renewable energy credits not become a loophole for landlords to get out of onsite energy efficiency requirements,” said Pete Sikora, a board member and director of climate and inequality campaigns at nonprofit New York Communities for Change.

Lerner agreed that offsets would be an important question for the board to consider.

“That’s a challenging topic,” she said. “For instance, if you had multiple buildings within a single portfolio, could you trade [emissions] between them? If one was really energy-efficient and one was not, collectively, how would that be counted?”

Sikora added that he believes the advisory board might also prove a useful vehicle for building support throughout parts of the real estate industry that were not necessarily supportive of LL97.

“Some of the entities that are on the advisory board pushed back against this law,” he said. While this might raise concerns that they will seek to water down the law in its implementation, another “way to look at that is that it is very helpful to now have some of those entities invested in helping to make the law a success,” he said.

Then there are questions that are beyond the board’s purview, and possibly the city’s, as well.

Perhaps foremost among these is where the green energy some building owners may need to meet the law’s emission standards will come from.

“I think there’s a lot of concern that as the deadlines get more aggressive there is not going to be the clean energy supply for [buildings] to even purchase,” said Steven Russo, chair of the New York environmental practice at law firm Greenberg Traurig.

“The ability to succeed under this framework is going to depend in large part on how quickly we can green the grid,” said Zachary Steinberg, vice president, policy and planning, at the Real Estate Board of New York. “How quickly does renewable energy come online to replace some of the dirtier energy sources? That needs to happen rapidly in order for us to reach our shared goals, but it’s outside the control of building owners.”

It’s a factor the board will consider in its deliberations, Bocra said.

“We’re all aware that this is a problem we have to solve both with better buildings and a better grid,” she said. “Obviously, our role is the better buildings side, but we will need to make decisions about the law and how it is implemented and the limits that are set in the law based on the grid that exists at that time.”

Bocra added that the city was taking action to encourage increased use of green and solar roofs as well as more distributed energy generation at the building level that she said will “help facilitate what needs to happen on the grid side, and [those actions] will certainly be part of the discussions that the board is having.”

According to Bocra, the board will also play a role in a driving factor behind the law’s implementation: determining penalties for non-compliant building owners.

The law provides a maximum penalty of $268 for every metric ton per square foot of carbon a building emits over the limit, but it also notes that various “aggravating or mitigating factors” should be considered when determining fines.

“That is part of what the advisory board is tasked with making a recommendation on: how we determine what methodology we use to determine what that fine should be,” Bocra said. “The law sets a maximum, and there may be situations where the board feels it is appropriate to take certain characteristics of the building into consideration. That’s a topic of discussion we have to include in [the board’s] work.”

Russo suggested this could be a key source of flexibility if the real estate industry struggles to implement the law.

“I think that’s probably the way it would go if it turned out you had wholesale non-compliance,” he said. “I don’t think the city would want to punish its real estate industry that way. But if you’re an operator or holder of real estate, that’s cold comfort standing here in 2020 talking about what’s going to happen in 2030.”