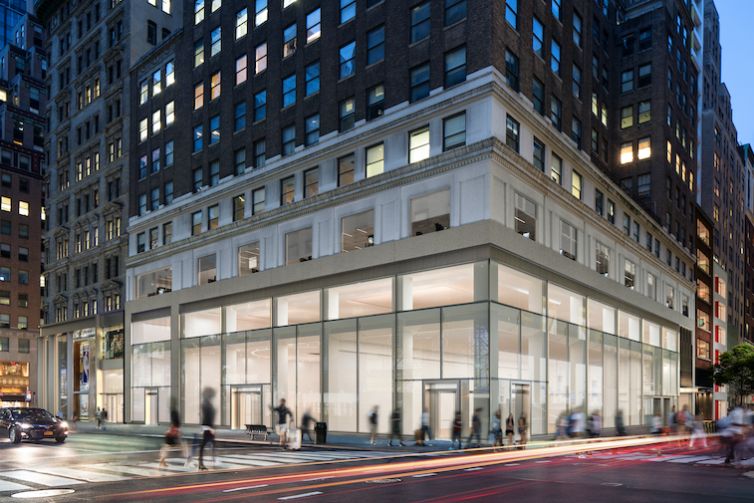 While the retail landscape is certainly shifting, significant retail deals are still being completed, as The Moinian Group’s successful December illustrates.

The Moinian Group, one of the largest privately held real estate groups in the U.S. and a driving force behind the revitalized west side of Manhattan with properties including Atelier, SKY, Oskar, 220 11th Avenue, and 3 Hudson Boulevard, brought the year to a close by bringing Läderach Chocolatier Suisse and a flagship Best Buy store to their properties at 535 and 537 Fifth Avenue.

Läderach anticipates introducing their U.S. flagship store in April to meet the demand of the Easter holiday rush for premium chocolate, while the Best Buy is expected to open prior to the 2020 holiday shopping season.

“New York City is important to us, because our retail concept is positioned to serve New Yorkers’ appetite for experiencing fresh Swiss chocolate with all the senses,” said Nathanael Hausmann, president, Läderach Chocolatier Suisse (North America). “With live demonstrations and chocolate-making classes, we are excited to create relationships with food-curious New Yorkers.”

The two buildings, along with the adjacent 545 Fifth Avenue, occupy a unique position within The Moinian Group’s extensive office portfolio.

“535, 537, and 545 are a group of buildings that The Moinian Group has owned for decades. We look at it as one asset internally,” said Gregg Weisser, executive managing director of Commercial & Retail Leasing at Moinian. “There are tenants that straddle both buildings. For example, the seventh floor is leased to a tenant that occupies from 545 to 535 [537 is a shorter building at three stories] — they took down the wall between the buildings.”

At present, 545 Fifth Avenue is best known as the home of the flagship NBA Store, which chose the building a few years ago for the sterling opportunities the location presents.

“The NBA wanted that corner so that when people came down Fifth Avenue, they could see it,” Weisser said. Over a million people a year walk by that corner. “They had the option to take a different corner, and other spaces on Fifth Avenue, but they chose TMG’s 545.”

Until roughly five years ago, the ground floor retail portfolio at 535-545 Fifth Avenue was occupied by outlets including an eyeglass store, a luggage store, a clothing store and a pizza place. As their leases began to expire, the company saw greater potential.

“There was a thought to create a big retail environment, and this was in the day when big-box users were actually out in the marketplace and shopping around,” said Weisser. “We always wanted to retrofit the outside of the building, and we couldn’t do that while those tenants were in place. So as those leases expired, we established a timeline to retrofit the entire facade of both buildings, going from 535 Fifth, which is on 44th Street, up Fifth Avenue and all the way to 45th Street, to the entrance to 545 Fifth. That took the better part of about eight months.”

In addition to new sidewalks, the company installed 30-foot high windows at street level to create a more welcoming environment for retail.

“From a physical and marketing perspective, we created a beautiful facade,” said Weisser. “We also punched through the building’s mezzanine and created a 35-foot high area at 535 Fifth from slab to slab.”

Once the new facade was in place and ready for tenants, Moinian was prepared to look far and wide for the perfect occupant. As it happened, they only had to look across the street to Best Buy.

While Best Buy was interested in relocating its Midtown location, it wasn’t seeking to take all the available space.

That meant Best Buy got the highly visible location it wanted, and Moinian still had a striking retail space left over to rent to Läderach, a Swiss chocolatier founded in 1962. With the Best Buy and Läderach leases in place, the buildings now have three smaller spaces for more retail to come: 535 Fifth has 5,200 square feet available, while 545 Fifth has 8,500.

To Weisser, the Best Buy and Läderach deals are indicative of a slightly stronger retail environment than many perceive.

“These leases say that there are tenants in the marketplace that are doing deals on Fifth Avenue,” he said.

One significant aspect of these deals for The Moinian Group is that it gives the company two prestigious flagship stores — The NBA Store and Best Buy — at what is essentially one property.

“Having a flagship store in a very important asset is really a great thing,” he said. “Flagship stores anchor your building, create a buzz, and create value — on top of, obviously, providing rent for the landlord and the lender. It justifies our strategy at the end of the day of clearing these spaces and spending millions of dollars recladding the building and putting up these 30-foot pieces of glass.”

“Before, we didn’t have the type of tenants that showed an upgraded asset or created value for a property. Now we have Best Buy, which is a clear winner in the evolving retail environment. We have Läderach, a renowned Swiss chocolatier. We’ve got the NBA, which is an amazing kind of tenant. If you look at the local market, there are three or four other large locations Best Buy could have gone to. The forethought to install this 30-foot glass facade elevated this asset and made it more valuable. In the end, it was worth the time and effort.”