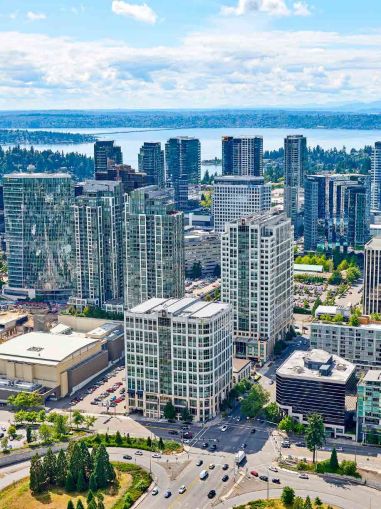 An aerial view of The Bravern. Credit: Invesco Real Estate

Invesco officials confirmed the sale but declined to comment on or confirm the sale amount.

Located within The Bravern mixed-use development, the buildings — at 688 110th Avenue NE and 11025 NE 8th Street — were previously owned by Principal Real Estate and PNC Realty and comprise 750,000 square feet. The office buildings sit atop 305,000 square feet of retail space and adjacent to 455 luxury apartments.

“This is a premier mixed-use asset comprising office, retail and residential,” Chris Cole, a senior director of transactions at Invesco Real Estate, said. “The office space provides a tremendous environment for Microsoft’s employees and we look forward to a long-term relationship with this outstanding tenant.”

With the opening of the Bellevue CBD light rail station — targeted to open to riders in 2023 — the office complex will connect directly to Microsoft’s Redmond campus.

“The Bravern is a good example of a true live-work-play environment and will soon be adjacent to Bellevue’s soon-to-open light rail station,” Cole said. “We believe this prime office space fits our client’s real estate portfolio well, as they seek institutional quality real estate with long-term value in the best international locations.”

Sitting across Lake Washington and the third largest city in the Seattle metropolitan area, Bellevue is a booming tech hub. As such, Microsoft is in very good company. Amazon opened its first Bellevue office in 2017 and — despite the company’s reported clashes with city officials over taxes as well as its giant corporate footprint — shows no sign of retreating; the Seattle Times first reported news of the 1-million-square-foot, 43-story skyscraper the e-commerce giant is planning at 600 Bellevue. The development plants a stake in the ground that seemingly underscores Amazon’s sights being set on Bellevue as a city to house its future growth.

Cole continued: “The Bellevue CBD is a well-established and highly amenitized office submarket which has become one of the most sought-after locations for technology tenants in not only greater Seattle but the entire country. We look forward to working closely with Microsoft, with whom we already have an established relationship. This asset represents the type of differentiated offices desirable to the most innovative companies, seeking an attractive work environment and location that allows them to continue to attract and retain the best talent in the world.”