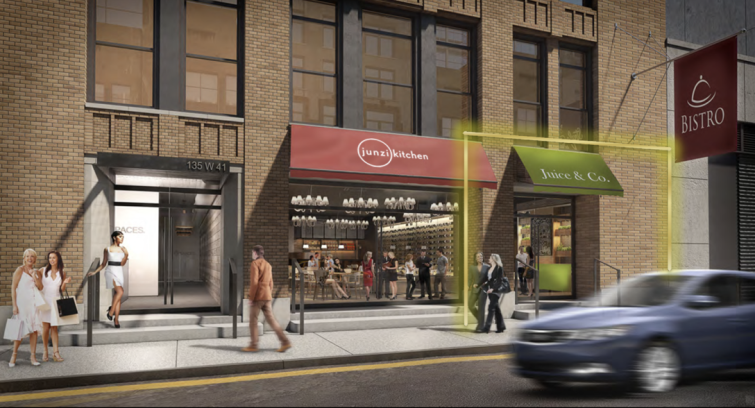 A club will replace a pizza shop on the ground-floor of a historic Theater District building known as the Bush Tower.

Lifestyle Mixx has signed a lease for 10,000 square feet at 135 West 41st Street, located between Sixth and Seventh Avenues.

The club, which will be called Club Nebula, will replace what was formerly Pronto Pizza at the base of the block-through building, which also has an address at 130 West 42nd Street.

Tribeca and Meadow Partners bought the leasehold for the historic 29-story property in 2013, with plans to reposition the property, and tapped Fogarty Finger for the job. In 2015, Vanke purchased Meadow Partners’ controlling interest for $56 million, according to property records.

The repositioning of the 250,048-square-foot building includes a redesigned entrance on West 42nd Street with a new double-height lobby. The back entrance on West 41st Street has not been significantly upgraded, and provides direct access to WeWork, which occupies five floors spanning 64,390 square feet.

Rent on the 4,762-square-foot ground floor was $233 per square foot, the New York Post first reported. The club is scheduled to open in the fall of 2020.