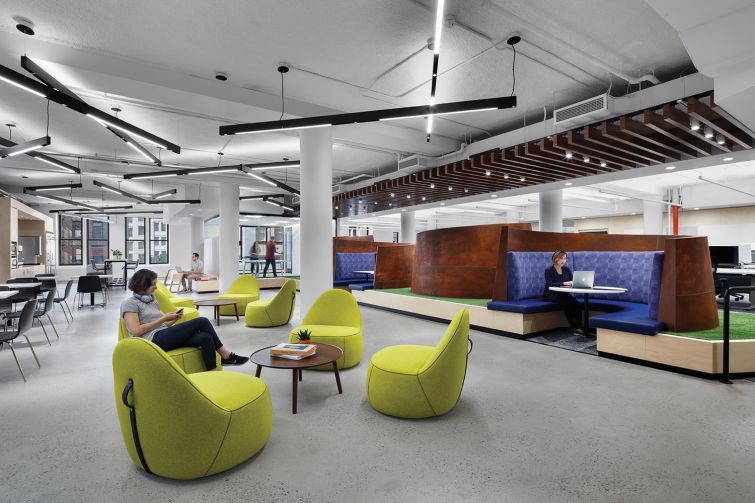 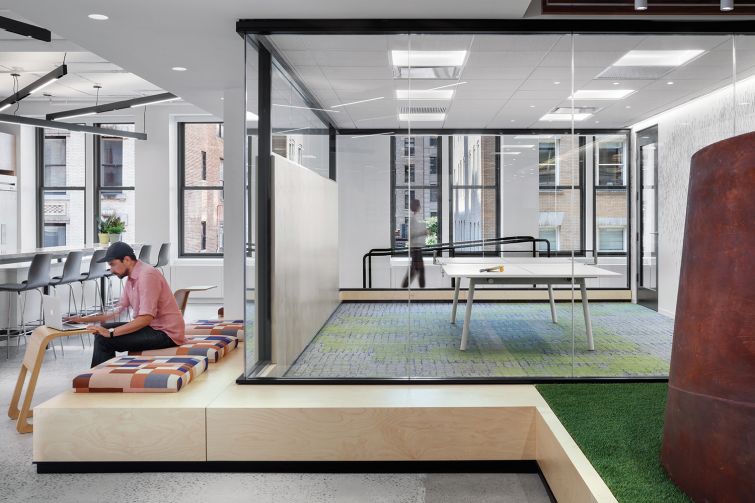 An elevated AstroTurf floor in the lounge is meant to be reminiscent of nearby Madison Square Park. Photo: Switzer Group 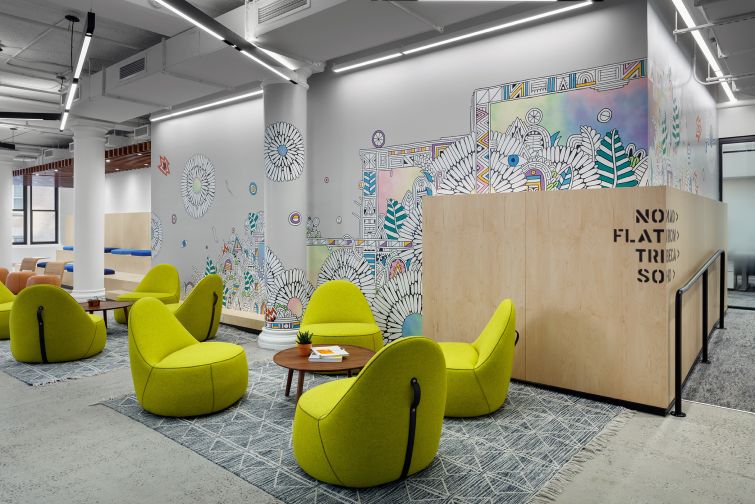 A colorful mural painted behind plywood is meant to be reminiscent of the city streets. Each part of the office is named after a city neighborhood, which is stenciled on walls or punched out of metal signs. Photo: Switzer Group 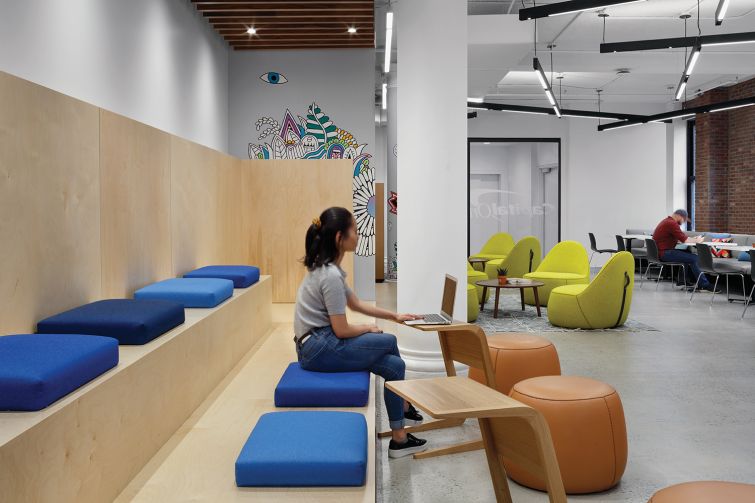 One lounge is designed with plywood bleachers for all hands meetings. Photo: Switzer Group 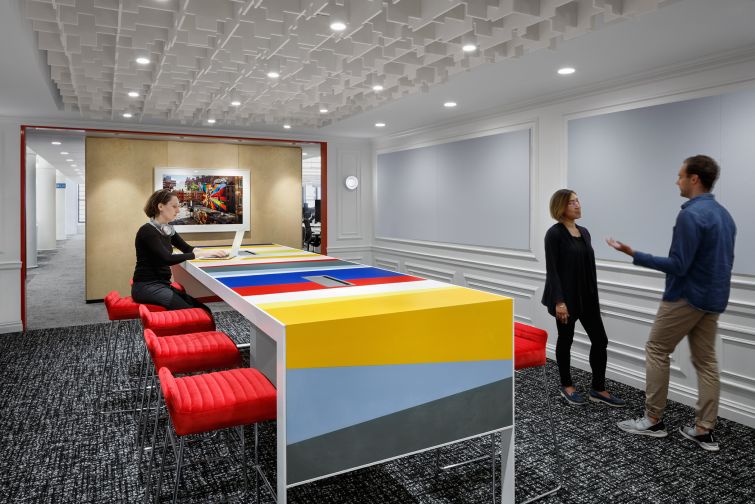 The 3-D printed ceiling in a meeting room is reminiscent of the city skyline. Photo: Switzer Group 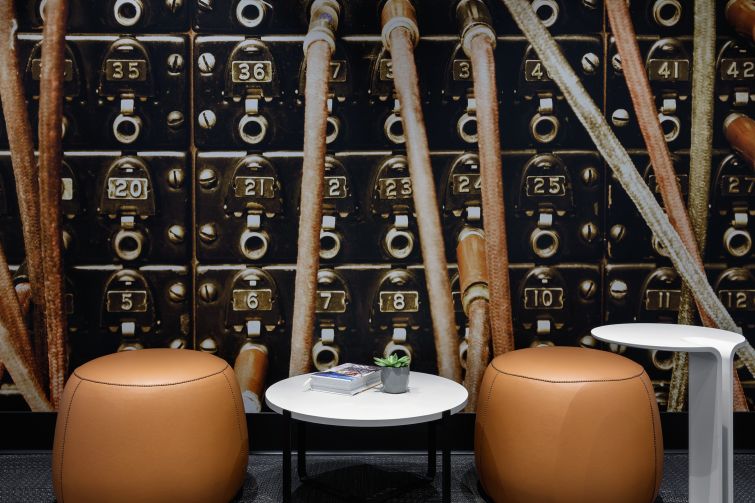 Sitting rooms were designed around the idea of old technology, like telephone switchboards. Photo: Switzer Group
Previous Next

When Capital One nearly double the size of its office in the Flatiron District, it hired architecture firm Switzer Group to design an open-plan space for its tech team, with different kinds of meeting rooms, cafes and lounges.

The architects from Switzer decided to organize each work area by naming them after various tony Manhattan neighborhoods, like the East Village, Flatiron, Chelsea and West Village; the names are stenciled on the sides of columns with directional arrows and punched-through metal signs to denote which part of the office corresponds with which neighborhood.

The 52,000-square-foot space spans the fifth and sixth floors of the 11-story building at 11 West 19th Street, where the bank expanded to 119,000 square feet in 2017. There are four different “neighborhoods” — or groupings of workstations — on each floor.

“One of the main requirements from the client was that they didn’t want to be sitting in a sea of workstations,” said Switzer’s Lisa Waldie, a designer who worked on the project. On the fifth floor near the elevator lobby, there’s a large, informal lounge with booths designed to mimic the circular, rusted metal sculptures of Richard Serra, and which have been elevated on a wooden plinth and surrounded by AstroTurf. It’s meant to resemble an “outdoor, living art piece,” Waldie explained.

“There’s Madison Square Park around the corner, and they’re always doing some kind of sculptural elements on the grass,” added Luc Massaux, a design principal at Switzer.

A glassed-in section of the lounge holds a ping-pong table, and the rest of the space is filled with worktables and a cluster of casual, upholstered lime green chairs. Another communal area features two tiers of wooden bleachers with blue cushions for a townhall-style meeting, along with soft upholstered seats and a work area with tables, plastic chairs and bench seats. A pale gray wall next door is splashed with a psychedelic mural, painted by a local artist, depicting flowers and eyes and geometric shapes in muted blues, greens and yellows.

Many of the rooms are divided or clad in “urban” materials like plywood, distressed metal, corrugated metal siding and acoustic paneling meant to reference scaffolding. The small meeting rooms depart from the New York City theme, instead adopting accent walls that reference different kinds of old technology. One room has a wall with a blown-up photo of a telephone switchboard, another has stenciled tools meant to resemble the garage where Steve Jobs built his first computer, and a third has newsprint-inspired wallpaper and clocks indicating the time in New York, Sydney, London and Hong Kong.

Other highlights include a collaboration room with an elaborate, 3D-printed drop ceiling that extends several inches from the actual ceiling. The ceiling structure is carved up into shapes that resemble little buildings, like someone simplified the skyline and then hung it upside down.