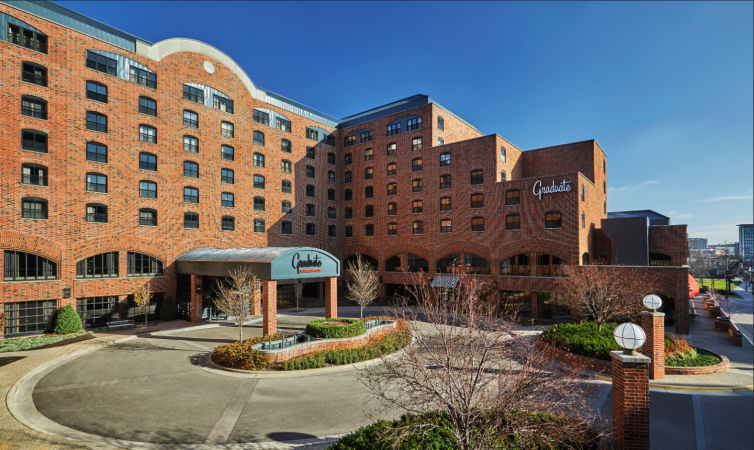 The Graduate Hotel outside of Minneapolis, Minn. Courtesy: Newmark

The floating-rate debt knocks out the prior Credit Suisse financing on the property, located at 615 Washington Avenue Southeast in the campus of the University of Minnesota, Twin Cities. The 304-room hotel is the closest lodging to the center of the 48,000-student campus, which spans both banks of the Mississippi River about a mile from downtown Minneapolis.

“The property’s location directly on campus makes it the preeminent choice for university-driven guests,” Roeschlaub said. “Furthermore, given its proximity to downtown Minneapolis, the [hotel] is also a top choice for anyone visiting in the metro area.”

AJ Capital bought the building, which used to be home to The Commons Hotel, in 2016, and reopened it a year later following a redesign. Documents from the University of Minnesota’s regents board show that AJ Capital owns the property under a ground lease from the institution, which expires in 2061 and offers a ten-year renewal option. The ground lease, which includes 122 parking spaces, transferred to AJ Capital when it bought the building four years ago.

At the hotel, a restaurant and bar called The Beacon serves guests and visitors. There’s also corporate meeting space, a fitness center and a suite of virtual golf simulators.

The Graduate brand’s rapid expansion has fueled a slew of recent refinancings, both individually and for portfolios of properties. Blackstone refinanced a group of nine graduate properties with a $275 million loan three years ago; more recently, construction and transitional loans have financed Graduate properties in New York City, and Nashville, Tenn.

“AJ Capital, through its Graduate brand, has found a true niche in the hospitality space by targeting university-centric assets and curating them to the local market,” said Schoenholtz, who co-heads NKF’s lodging division.