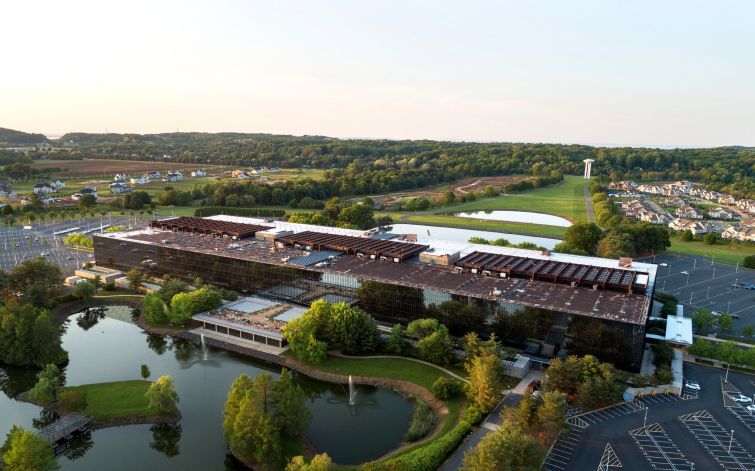 “This represents an exciting milestone for Bell Works and the ‘metroburb’ vision as a whole,” Ralph Zucker, President of Somerset Development, said. “As we continue to approach full occupancy, this redevelopment has demonstrated the ability to create value in a suburban location that was once viewed as unachievable.”

The 1.4-million-square-foot property, at 101 Crawford’s Corner Road, was formerly Bell Works, a research and development facility for Bell Labs and Alcatel Lucent. Constructed in 1959, the complex was designed by modernist architect Eero Saarinen, and was the site of Nobel Prize-winning research, including physicist (and former U.S. Secretary of Energy) Steven Chu’s 1997 discoveries around laser-cooling technology.

Somerset Development acquired the vacant asset for $27 million in 2013, according to The New York Times, undertaking an extensive redevelopment plan that preserved the existing architecture while modernizing the building to accommodate technology tenants. Current tech tenants include iCIMS and WorkWave and the property also counts Guardian Life Insurance and Jersey Central Power & Light in its roster.

Total repositioning costs were expected to be around $200 million, according to an announcement from Somerset at the time of acquisition, and in July 2017 the developers landed a $70 million construction loan from Investors Bank to to accommodate capital expenditures for upgrades and tenant improvements.

In prepared remarks, Square Mile Principal Sean Reimer said the transaction gave the firm the opportunity to partner with a prominent New Jersey developer on a market-leading project and said the deal is representative of the flexible capital solutions that Square Mile provides to its clients.”

“The sponsorship had a vision that no one else saw—the concept of the “Metroburb,” an urban oasis in a suburban setting. In an incredibly short period, sponsorship leased nearly 1.4 million square feet of office and retail space,” Anderman said in prepared remarks. “Today, with Bell Works nearly 100 percent leased, this refinance allows the sponsorship to finish building-wide capital improvements, fund tenant improvements and leasing commissions, and pay off their existing debt.”