WeWork. Amazon. Hudson Yards. Rent laws. Barneys. This was the year when nothing made sense 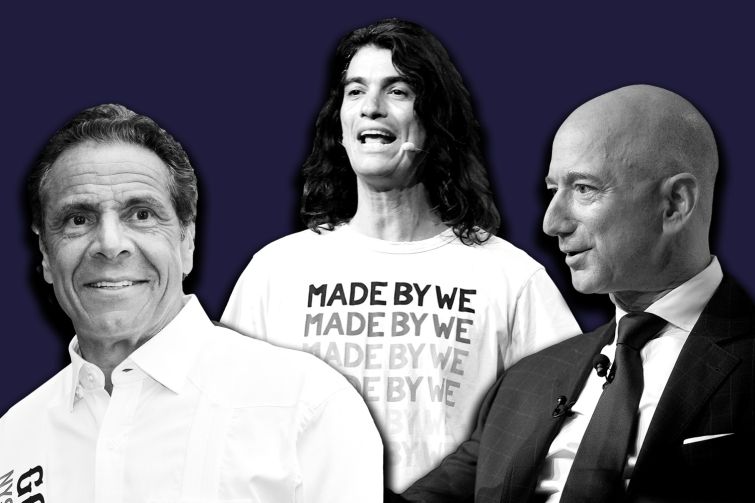 Looking back, there were three big stories in 2019: Amazon’s big sayonara to Gotham, the implosion of WeWork, and the passage of the most sweeping rent reform in New York City history.

None of these stories were ones that the bulk of the real estate industry was eager to read. And many of the secondary stories weren’t much happier: Luxury condominiums began gathering dust. More quality brands succumbed to the ongoing retail plague. More workers died in construction accidents.

Yes, there were silver linings. Amazon walked away from Long Island City; but it appears that they’re making a covert effort to actually find space in the city anyway. It won’t be under the guise of a big national contest and it might not be called HQ2, but just this month Amazon took 335,000 square feet on the Far West Side.

WeWork went from a $47 billion monster to an emperor with no clothes; yes, it was shocking. (Although, not too shocking.) But the flex-space model they pioneered isn’t going anywhere.

Rent reform has seemingly placed a big boot on the investment sales market; but, to paraphrase Dr. Ian Malcolm of “Jurassic Park”: Real estate will find a way.

Whatever else you might want to say about real estate in 2019, you can’t argue it wasn’t at least entertaining.

The office market may be ending the decade on a high, but this past year certainly offered its fair share of lows.

New York City experienced the loss of Amazon, the downfall of WeWork, and the sale of the Chrysler Building for a song. It also saw the opening of Hudson Yards, huge commitments from the tech titans, and leasing volume that’s set to break records for the third year in a row.

The year started on an optimistic note. In January, Amazon was setting up its headquarters in Long Island City. WeWork — Manhattan’s largest tenant — was awarded its now notorious $47 billion valuation and closed on the first blockbuster deal of the year, its $850 million purchase of the Lord & Taylor Fifth Avenue flagship.

Then came February and the Amazon blow, when Bezos ditched plans for New York (on Valentine’s Day, no less!) in the face of strident opposition. Reactions to the move from those in the real estate industry were mostly mournful, varying from a “great loss” (Jeff Blau) to the “stupidest damn thing” (Steve Roth) to a “self-own” (Jake Schwartz).

Amazon’s departure was followed by the sale of the iconic Chrysler Building, which traded for a mere $150 million, down from its $900 million valuation a decade prior, primarily because of a sticky ground lease. CBRE’s Darcy Stacom, who brokered the deal, told Commercial Observer that the expected sales price was closer to $50 million, but interest grew and ended with two competing firms bidding the price up.

Then things picked up again. In March, the third of four Hudson Yards office towers, 30 Hudson Yards, was completed, at the same time as the grand opening of the mega-development to the public, solidifying the Far West as a vibrant office submarket. At the time, the project’s 8.9 million square feet of office space was roughly 82 percent leased, according to Related.

A month later, in the year’s biggest office trade, Allianz and Related Companies bought back WarnerMedia’s 1.5-million-square-foot office condo at the Hudson Yards building for $2.2 billion.

In May, Google purchased the Milk Building at 450 West 15th Street for $592 million, adding to its substantial holdings in the Chelsea area. Shortly afterward, it confirmed that it would lease the entire 1.3-million-square-foot St. John’s Terminal building at 550 Washington Street, part of its commitment to a $1 billion, three-building Hudson Square campus it had announced in late 2018.

Another area of growth for New York this year was the film and TV production sector. In the summer, Robert de Niro announced a $425 million studio project in Astoria, adding to an $100 million Brooklyn production hub that Netflix had announced earlier in the year. In the Bronx, York Studios was nearing completion on its new 175,000-square-foot campus in Soundview.

In late summer, the WeWork debacle began. Initially scheduled to IPO in the fall, WeWork released its S-1 in August and immediately all hell broke loose. Once their numbers became public, and CEO Adam Neumann’s shenanigans were exposed, the high-flying unicorn became the poster child for irrational exuberance.

The falls came quickly. Adam Neumann was fired, the IPO was shelved, the valuation tumbled from the roughly $20 billion it had at the start of the IPO process, as per Bloomberg, to its final $8 billion, and the coworking giant nearly ran out of cash.

The full fallout from the WeWork implosion has yet to be seen, and the company is in the middle of layoffs now.

In the meantime, flex isn’t going anywhere, and while WeWork won’t be doing any leasing in the foreseeable future, some of its rivals are in a strong position, with Knotel reaching unicorn status in August after a $400 million cash influx.

Also in the summer, the second-biggest deal of the year took an unusual twist, when the Coca-Cola building traded hands only to be immediately flipped. In August, the soft-drink giant sold its iconic building at 711 Fifth Avenue to Nightingale Properties and Wafra Capital Partners for $909 million. Then, barely three months later, Wafra sold its stake to Michael Shvo, valuing the building at $937 million, prompting questions as to how Coca-Cola undersold in the first place, and the motivations of the ownership.

The final months of the year brought some high-level leases, including Facebook’s 1.5-million-square-foot deal at Hudson Yards, marking the biggest lease of the year. The news was followed by an announcement in early December that Amazon would be taking 335,000 square feet at SL Green Realty Corp.’s 410 Tenth Avenue, also on the Far West.

And so, we ended the year where we began: with Amazon, and with good vibes.

This year in retail was marked by long-delayed mega-projects finally opening up their doors while storied retailers filed for bankruptcy and shuttered theirs. But a new trend also reached saturation, leading some to dub 2019 the “year of the food hall.”

It seemed not a week went by without a new food hall being announced around the country. Just in New York City, Legends Hospitality said it would open a food-and-entertainment venue at 28 Liberty Street, Korean food hall KFF would bring a 22,927-square-foot one to 218 West 40th Street, Urbanspace would open its fourth around the city at 135 50th Street and the Manhattan West mega-project would get a 40,000-square-foot food hall run by C3, among others.

Hudson Yards opened its food hall Mercado Little Spain in July while the first phase of the 35,000-square-foot The Market Line food hall opened at Essex Crossing in November.

“We’ve really evolved into this just complete foodie culture,” said Meghann Martindale, the global head of retail research for CBRE. “We’ve seen a lot of farm-to-table or seed-to-plate healthy concepts in food, a lot of new international concepts coming and the rise and proliferation of food halls and that real experience around food.”

But even as many keep popping up, experts feel the trend may start to slow down as too many landlords pigeon-hole food halls into areas and spaces that can’t support them.

“You just to be really careful that you have all of the elements I mentioned, including the density and the traffic working together,” Martindale said. “Because if not, I think there’s a pretty high failure rate that we could be looking at.”

Even as food halls gobbled up thousands of square feet around the city this year, Manhattan also lost many long-term retailers. In January, Henri Bendel closed its 712 Fifth Avenue flagship after 123 years, as did Gap at 680 Fifth Avenue and Lord & Taylor at 424 Fifth Avenue.

Forever 21, Lord & Taylor, Payless Shoes, Diesel, among others, all filed for bankruptcy this year.

One of the biggest blows came in November when Barneys New York — which filed for Chapter 11 in the summer — was sold to Authentic Brands Group and B. Riley for $271 million. Its new owners plan to shrink its 660 Madison Avenue flagship and license Barneys’ name to competitor Saks Fifth Avenue.

“Barneys freaked everybody out,” said Robin Abrams, a vice chairman at Compass.

On the flip-side, department store Nordstrom opened its more than 300,000-square-foot flagship at 235 West 57th Street in October. And it wasn’t the only project to cross the finish line this year.

And as the astronomical asking rents of 2014 to 2015 finally came down around Manhattan, leasing velocity has returned as well. A CBRE report found that 2019 far outpaced 2017 and 2018 for deals signed.

“We feel good, we feel optimistic,” said Brandon Singer, an executive director at Cushman & Wakefield’s retail team. “The velocity of deals is starting to pick up.”

On the policy side, the real estate industry had a rough year. The first half of 2019 coalesced around the threat of the state legislature passing stricter, more tenant-friendly rent laws. Then the newly Democrat-controlled State Senate helped push through the toughest rent bill the city has seen in 30 years, and Gov. Andrew Cuomo signed it in June without a second thought. The real estate industry was in an uproar. Many of the city’s most powerful landlords and developers had assumed their tens of thousands in contributions to the governor had earned them some sway over state policy.

The investment sales market responded in kind. The value of rent-stabilized properties across the city dropped by a third over the summer, according to estimates from investment sales brokers. The dollar volume of multifamily transactions in the city slid 51 percent year over year in the third quarter, data from Ariel Property Advisors shows.

Luxury condo builders did manage to beat back a proposed “pied-à-terre tax” on second homes worth $5 million or more. But condo buyers will still face an increased “mansion tax” on all sales over $1 million, which may dent the already-sluggish high-end residential market in the city.

The city also passed a dramatic retrofitting bill in May that will force many commercial property owners to reduce their buildings’ carbon emissions 40 percent by 2030 and 80 percent by 2050. Owners of large office properties are unsure of how they will comply with new standards in 11 years, and landlords will face significant fines on a per-square-foot basis if they can’t slash their properties’ energy usage.

Construction, meanwhile, has continued at a brisk clip across all sectors. The year is expected to wrap with an estimated $61.5 billion in construction spending, according to the New York Building Congress, with 80.7 million square feet of both residential and non-residential space created. Hudson Yards debuted its public spaces and its retail in March, and two avenues to the east, Brookfield Properties just opened One Manhattan West, the first building in its Manhattan West megaproject. In September, SL Green topped out One Vanderbilt, its 1,401-foot-tall, 1.67-million-square-foot office tower by Grand Central Terminal. The city Department of Buildings is expected to permit roughly 20,000 new units of housing this year, which is similar to last year’s total 20,910 units, federal Census data shows.

The governor has also pushed for major redevelopment projects at both LaGuardia and John F. Kennedy Airports. Delta Airlines opened a new $3.9 billion terminal at LaGuardia in October, and the airport is expected to get a new $4 billion Terminal B in 2021. Redevelopment of JFK is expected to start next year as part of a plan that calls for two new terminals at an expected cost of $10 billion. The TWA Hotel also opened in May inside the 1960s TWA Flight Center, giving travelers an on-site hotel at JFK with views of the runways.

And in October, the City Council greenlit the construction of four new jails in Manhattan, Queens, the Bronx and Brooklyn as part of the de Blasio administration’s plan to shut down Rikers Island. The new detention facilities are expected to generate billions in public construction spending; 16 percent of the city’s capital budget in 2023 is expected to go toward the cost of the new jails, according to NYBC.