Four years in the presidential limelight — and one controversial fundraiser later — real estate professionals are still keeping the 45th President of the United States at arm’s length. 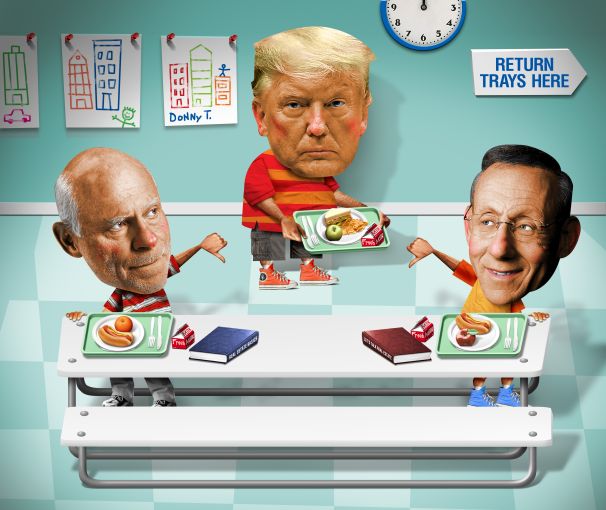 Real estate execs to Trump: "You can't sit with us." Illustration: John Corbitt.

That was a common refrain among real estate executives when talking about Donald Trump in the lead up to the 2016 election.

It’s almost a quaint time to think back on; the industry, like much of the country, started off viewing his candidacy in a half-bemused, half-confounded way. Sure, he had his supporters in certain pockets — most notably Thomas Barrack at Los Angeles-based Colony Capital, Richard LeFrak of LeFrak and Steven Roth of Vornado Realty Trust — but those advocates within the industry were few and far between.

When Commercial Observer polled real estate owners on their favored candidates in August 2016, just 8 percent supported Trump (with a chunk of that support coming from a vote from Trump’s son-in-law, Jared Kushner, whose brother-in-law, Joseph Meyer, is the chairman of Observer Media) whereas 37 percent openly supported Hillary Clinton. Thirty-four percent opted to be discreet and did not answer the question.

Hadn’t Trump scarred developers and lenders, leveling lawsuits like a kid with a BB gun, until nobody would work with him? Execs noted that he had few actual real estate holdings and was flushed out of the industry and into a series of branding deals that were passed off as a real estate empire.

Industry voices, like the nation writ large, assessed Trump’s chances and threw themselves into opining on the election.

“I think, like many Americans perhaps, I was being traumatized by the Trump effect,” Time Equities’ founder Francis Greenburger, told CO when discussing the election in August 2016. “You watch all that hate and bigotry and negativism — America is falling apart, crime is wild, the facts don’t matter — and you get disoriented.”

Fast forward four years, and the kid from Queens is now the 45th President of the United States and facing the head-spinning possibility of either impeachment or re-election or both.

Where do the real estate power players stand in all this?

“For the nation, it’s been a disaster,” said Douglas Durst, chairman of the Durst Organization, on Trump’s presidency. “We’re abandoning allies, he’s using his office to further his own political goals, his policies at the border; it’s just an endless list of issues.”

“Anyone who’s known him should not be surprised at his behavior, although I believe many of us, including me, had hoped that perhaps becoming president would allow him to rise to the occasion,” Durst continued. “But obviously, he went the other direction.”

Durst said that he hasn’t seen industry opinion do a dramatic about-face since 2016 and that most execs, like the nation at large, have become more entrenched in their views. “Those who were opposed to him are even more opposed, and those who supported him are greater in their support,” he said.

But intrepid anti-Trump voices tend to be a rare commodity within the industry these days. CO spoke to more than half a dozen real estate executives — all New York-based veterans from big-name real estate firms — and none of them expressed support or admiration for Trump’s social views, ranging from his anti-immigrant tirades to his retrograde treatment of women and minorities. Tellingly, however, with the exception of Durst, the executives willing to speak with CO would only do so on the condition that they weren’t named in the article, for fear of reprisal to themselves or their firms. A lot of the boldness from executives when CO polled them in 2016 has evaporated.

“I don’t think New York likes Trump; we live in a liberal world here,” said the first industry source. “This is not Trump-land, that’s for sure. I don’t think he’s ever been particularly well liked in the real estate community, or necessarily highly respected.”

“Everybody gets up every morning and prays that Ruth Ginsburg stays alive, right?” said a second market player.

A third industry expert said that, though Trump’s behavior can come off as “unpresidential,” he supported some of his policies. And while many pointed out that they didn’t vote for Trump, they hinted at a predilection for him and his fiscal policies should Senator Elizabeth Warren of Massachusetts win the Democratic nomination.

Part of the reticence might have something to do with the fact that the industry was spooked by the stances running through the halls of Albany.

“I think people will never want to admit that they’re going to vote for Trump, because they’re not voting for him — they’re voting against socialism,” said the second exec. “The left wing really came out strongly and has tipped the conversation toward redistribution of wealth.”

“The Democrats are making the same mistake: the $16 trillion on [climate change], eat less red meat — philosophically, telling people what to do is anti-American,” said the third industry source. “We don’t need the nanny state.”

A few sources found Joe Biden to be the only acceptable, electable option among the Democratic contenders. (Though a resounding number of real estate titans in the pages of this magazine still pray for a run by Michael Bloomberg.) Durst said he prizes truthfulness in the future Democratic candidate and, while he didn’t wager on who that may be, “we’re supporting whoever it is,” he said.

The second exec added that, “It’s not that Trump is doing so many good things for capitalism.”

In fact, many sources harbored animosity towards Trump for the changes in the tax code and the ensuing pain on the residential side. “He crushed everybody in New York City,” said a fourth market player.

Still, you won’t find many execs speaking up about that.

“There’s never been a more publicly vindictive president,” said the fourth source. “So, I think people navigate around that, and deal with the devil that’s there right now.”

After all, given Trump’s penchant for firing off Tweets and pivoting on both foreign and domestic policy in response to slights, it’s not surprising that real estate players — some of whom he knows on a first-name basis — are ducking for cover.

“Frequently, he’s called the most powerful man on earth, so I think people have good reasons to be afraid of him,” Durst said.

Durst has been publicly targeted by Trump on Twitter. (“He attacked us as a terrible manager and taking advantage of things [at the World Trade Center]. It’s just typical Donald.”)

Durst even had a piece of advice for anybody finding themselves in Trump’s crosshairs: Ignore him.

But not everybody is willing to do that.

“Generally, everybody is treading much more lightly,” said a fifth market player, touching on the fact that neutrality seems to be the favored position. The fourth source called him a “necessary evil” that market players have to deal with, in hopes that he won’t be vindictive towards government-funded infrastructure projects in New York City.

Which is what made watching the backlash to Stephen Ross’ fundraiser last summer all the more fascinating.

The response to the event — an August luncheon where the Related Companies head hosted Trump at his Southampton home, netting $12 million for Trump’s re-election campaign, according to a Tweet from RNC Chairwoman Ronna McDaniel — served as a compelling reminder of just how low the president polls, and how that can rub off on those associated with him.

“Traditionally, people have been able to raise money for both sides of the aisle without being judged or without it really impacting them personally,” said a sixth industry expert. “But I guess in today’s world, it’s so diametrically opposed that you can’t do it.”

The backlash started with a call to boycott the fitness chains Equinox and SoulCycle, which are owned by Related. The ownership link (news to many) seemed to catch even Equinox by surprise, with the gym scrambling to release a statement espousing its commitment to “tolerance and equality” and distancing itself from “passive investor” Ross.

Media reports were rife with stories of people questioning their patronage of these spots. The exchange was amusing for market players to watch; they were fully aware that a spandex-clad man waffling at the entrance to the new SoulCycle at 556 West 33rd Street would just have to crane his neck upwards to understand how to really hit Ross’ pocketbook.

But the blowback did hit Related and Oxford Properties’ Hudson Yards, with fashion designers ditching shows at cultural center The Shed.

“I haven’t spoken to Steve about it, but I can’t imagine he had any idea that that was going to be the reaction,” said the sixth exec.

That Ross stuck his neck out for Trump was surprising given Ross, who’s a registered Democrat, doesn’t have a reputation for even liking the guy. In February, Ross deflected questions about Trump in an interview with New York magazine stating, “I don’t like Donald, OK? We can stop there. We’d be here all day.”

One market player speculated that it was Ross’ ties to his deceased uncle, Max Fisher, that explained the move. Fisher was an adviser to Republican presidents and a political fundraiser; perhaps the event was Ross’ way of showing support for that effort. Another market player said it may have been to rub elbows with foreign capital, from Saudi Arabia to China, that might have attended the event.

But the prevailing theory was that Ross hosted the event as a strategic move to garner support and funding for his development projects.

“I think the Ross thing is more business-driven than anything else; Ross’ politics have been far more liberal than whatever Trump has advocated over the years,” said the fourth exec. “Ross also has Hudson Yards and he wants to see the city and the state get money for rail yards and other infrastructure that benefit his real estate developments. So, I’ve got to believe that was more transactional than anything else, and not supporting the man or his politics.”

Another source chimed in that Ross is still knee-deep on plans to develop the western side of the site: “He needs the [Long Island Rail Road] to do something in order to go ahead and build the west yards,” the fifth exec said. “If he ultimately gets what he wants … it was worth all the pain and suffering. And in today’s day and age, everybody’s gonna forget it.”

A representative for Related, in response to a request for comment, pointed to a statement that Ross issued following the event: “I have known Donald Trump for 40 years, and while we agree on some issues, we strongly disagree on many others and I have never been bashful about expressing my opinions.”

Whatever the impact on New York City real estate players, Trump is facing an eventual return to his hometown — whether that’s imminent or five years down the line. Looking forward, executives don’t see the industry welcoming him back into the fold.

“Does his brand now have any value to somebody that wants to spend $5,000 a square foot buying a penthouse condo?” the fourth source said. “People are suing to get his name off the building.”

He added that Trump lacked warm supporters in New York City. “I think that bridge is going to be tough to ever build back,” he said. And the same questions would remain: Does any bank want to deal with him? Does anybody want to partner up with him?

But those questions might be entirely moot. One exec noted that Trump’s likely to cast the real estate deals aside, maybe leaving it in the hands of Ivanka Trump and Jared Kushner, and work on building a media empire. He’s previously floated the idea of launching his own television network.

“Most people don’t view Trump as a real estate developer in the traditional sense of what we do,” said the fourth exec. “At one point in his life, sure, but no longer; he’s a pure marketer, he’s an entertainer, he’s a politician. So, he’s not really a real estate guy.”