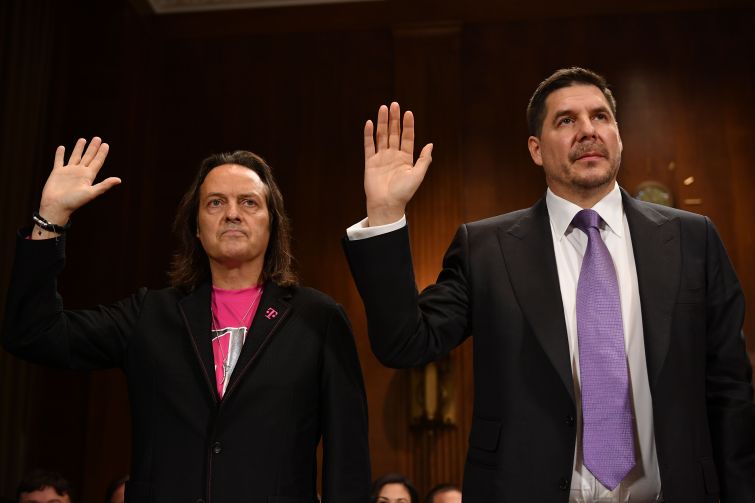 T-Mobile CEO John Legere (Ieft) and SoftBank Group and Sprint's Marcelo Claure. Legere is reportedly in talks to take over as CEO of WeWork. Photo: Mandel Ngan/AFP via Getty Images

WeWork might be about to replace one long-haired, bombastic chief executive officer with another.

The coworking giant is reportedly in talks with T-Mobile CEO John Legere — known for his trash-talking Twitter presence and being constantly decked out in T-Mobile clothing — for him become the head of WeWork and right the company after its troubled initial public offering and departure of co-founder Adam Neumann, the Wall Street Journal reported.

Legere would replace co-CEOs Artie Minson and Sebastian Gunningham, who have been in charge of WeWork since September when Neumann stepped down amidst pressure from investors.

The 61-year-old Legere has been the CEO of T-Mobile since 2012 and has led several telecommunication firms in his career, but has no previous experience running a real estate company.

However, Legere has connections with WeWork’s majority investor SoftBank Group, which took over WeWork last month and installed Marcelo Claure in its management team to stabilize the startup, and experience turning companies around.

Legere has taken T-Mobile from a failing fourth wireless carrier to a thriving third which had its share price jump nearly 240 percent since he took charge of the company, the WSJ reported.

Claure, the former CEO and current executive chairman of SoftBank-backed Sprint, has publicly sparred with Legere on Twitter in recent years and called Legere a “con artist” in 2016, but the two have been working together on the merger of T-Mobile and Sprint, CNN reported. The combining of the company was approved by the United States Federal Communications Commission last month but is still being fought by more than a dozen attorney generals around the country, CNET reported.

Shares of T-Mobile dropped by more than two percent in the wake of the reports Legere was heading to WeWork.

WeWork has had a disastrous few months with a failed IPO, questions of its money-burning business model, ousting of Neumann and exodus of executives and staff.

The issues started in August when its IPO filing threw open the doors to its financials and showed that while WeWork’s revenues grew from $438 million to $1.82 billion between 2016 and 2018, the company’s net losses grew during the same time from $430 million to $1.6 billion.

Neumann was already facing pressure from backers when a WSJ profile of him uncovered his erratic behavior — including smuggling weed on a private jet to Israel — and he was pushed out of the company in September. Minson and Gunnigham took over and announced plans to halt the IPO less than a week later.