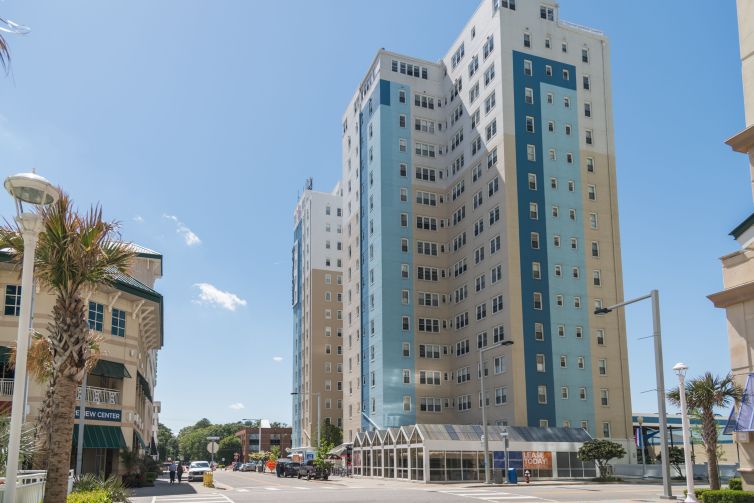 Hunt Real Estate Capital provided a $33 million loan to Texas-based Lynd Acquisition Group for its purchase of a 16-story apartment building on the waterfront of Virginia Beach, Va., Commercial Observer has learned.

Lynd picked up the 266-unit Mayflower Apartments at 205 34th Street from Harbor Group International for $43 million in a deal that closed Friday, according to Newmark Knight Frank, which brokered the sale and financing for both sides.

“This is a crown jewel in Virginia Beach; there is nothing else like it,” Adam David Lynd, the CEO of Lynd, said in a statement. “With the Mayflower, we see a tremendous opportunity to execute our current strategy of identifying unique properties that are undervalued and craft tailored plans to unlock the value in both rents and occupancies.”

The five-year bridge loan — at a rate of Libor plus 300 basis points — features full-term, interest-only payments, according to NKF.

The Mayflower takes over the entire block between 34th and 35th Streets and Atlantic and Pacific Avenues and includes 3,140 square feet of retail, off-site parking and a separate 11,915-square-foot retail structure. Harbor Group picked up the property for $34 million in 2013, The Virginian-Pilot reported.

“[Harbor] usually holds on to the properties it buys for three years, on average. This one was different. It was in the company’s ‘backyard’ and could be closely managed.” Jim Vallos, the vice president of asset management for Harbor, said in a statement. “When we bought the property, we saw real value in the location. Much of the renovations consisted of brightening common areas and lounges with new lighting, furniture and interior colors.”

As part of the sale, Lynd plans to pump $4.6 million into capital improvements in the common areas — including adding surfboard lockers and a renovated fitness center — and individual units.

“We have a long history of transacting with [Lynd] on these type of value-add assets,” Marc Suarez, a director at Hunt, told CO. “Taking an older building and bringing some of the amenities up to where a brand new [building] would be and acquiring it below replacement cost is something that is very attractive to us.”

“Mayflower Apartments are the only high-rise property right off the beach, and the new owners saw the potential in committing to a solid capital improvements plan for the asset,” said Stimler. “To make that a reality, we worked with Hunt Mortgage Group through Marc Suarez, who provided [Lynd] the financing they needed to realize the full potential of this one-of-a-kind apartment building.”