The vice chairman of the flex meeting, event and office space company will depart at the end of the year 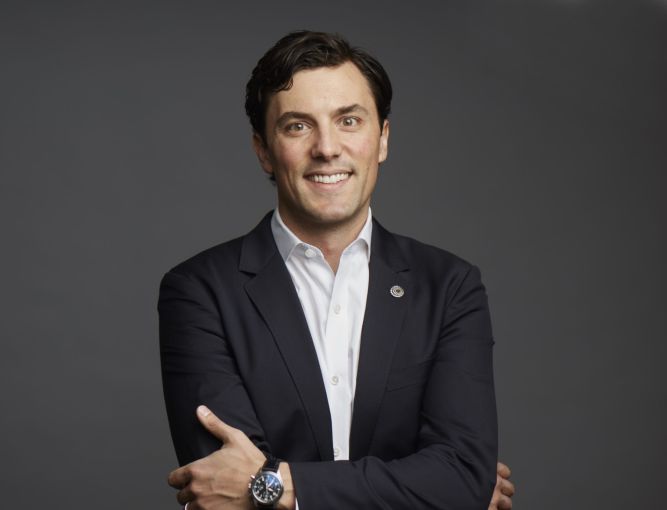 Chris Kelly will be stepping down as vice chairman of Convene. Photo: Convene.

Chris Kelly, the co-founder and vice chairman of Convene, will be stepping down from his position at the end of the year, Commercial Observer has learned.

The 37-year-old exec announced the news while addressing the company at a town hall meeting held earlier this afternoon in Battery Park City. Kelly co-founded Convene, the New York-based provider of flex meeting, event and office space, with his college classmate Ryan Simonetti in 2009.

“Today I announce that I’m stepping away from my day-to-day role at Convene as of December 31st,” Kelly wrote in a note that was sent to staffers. “It is with a smile on my face and a tear in my eye because I know that what we started 10 years ago has grown into a wonderful, thriving, and forward-looking organization.”

The announcement comes on the same day that troubled competitor WeWork was also expected to address major changes at its all-hands meeting.

“The right time to move on is when you have the most amount of confidence, and you’re the proudest, and you feel the best about it, and that’s where we are with Convene,” Kelly said in an interview with CO. “And I understand that we’re telling this story at a moment in time where there are other companies that are going in a different direction. But my moving on is a vote of confidence in the company and its leadership.”

Kelly told CO that his departure was a few years in the making and that he had held open discussions with Simonetti on the topic. “It’s very much mutual,” he said, adding, “Ryan as a CEO is, I think, just coming into his perfect moment.”

Over the past few years, Kelly said his role has shifted away from day-to-day operations as he’s delegated responsibilities away. He’s been focusing on three areas: driving culture, business development and brand awareness, and serving as a strategic advisor to the executive team.

Earlier this year, in January, Kelly stepped down from the role of president and was appointed vice chairman of the board. The move was described as “part of Convene’s strategic focus on identifying a company president that will help the growing firm scale its operation globally,” the company said in a statement at the time.

The firm is not seeking to fill the role of vice chairman, and has shelved plans to hire a new president, Kelly said.

“Right now, we’re not actively pursuing the president,” Kelly told CO. “We have an incredible leadership team that, in the moment, is complete, other than our Chief Growth Officer, which we’re actively in search for. But, other than that, there are no immediate plans for other C-level positions.”

Kelly will depart from the company at the end of the year, though he will stay on in an advisory capacity. Going forward, he sees the company staying the course on its strong sales and marketing performance, and he said he’d be involved in any major strategic changes.

“Over the course of the past 10 years, I’ve ridden out what is the quintessential trajectory of an entrepreneur who has successfully scaled the business from a start-up phase to really an enterprise and a self-sustaining institution,” he said.

On the financial side, he noted that he maintains strong ties to the company (“the majority of my equity is remaining in the company…I am still a significant shareholder,” he said) and is leaving on good terms (“they’ve taken great care of me,” he said.)

Looking forward, Kelly is planning to take some time off to spend time with his family, including his two young children, while also finding time to travel and write. (After graduating college, he spent two years circling the globe).

His future career plans aren’t firmed up, but they will likely land outside the proptech space.

“My entrepreneurial process is to take a big step back, and look at the world, and think about where are the biggest problems to solve; I believe that there are bigger problems to solve in the world than proptech now,” he said.

Kelly counted growing the company culture as among his most rewarding experiences, as well as expanding into new markets. He pointed to Convene’s launch in Chicago as a highlight. “It was the first location that we built from the ground-up with local talent that really reflects the Convene DNA,” he said.

Convene has raised a total of $260 million in funding, with its most recent Series D round in July 2018 raising $152 million. Its investors include landlords RXR, The Durst Organization, and Brookfield, as well as firms ArrowMark Partners, Declaration Capital, QuadReal Property Group, Revolution Growth, CVC2, and Elysium Management.

Its portfolio consists of about 1.5 million square feet of space across 30 locations.