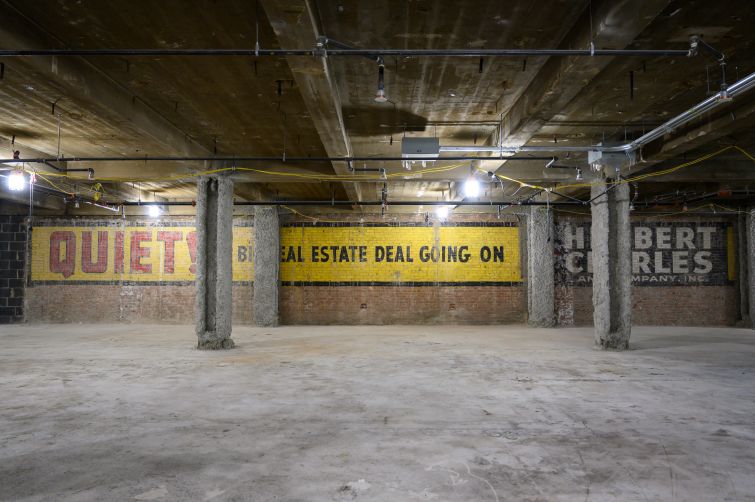 A full view of the vintage real estate ad, which was originally painted on the exterior of the building next door. Photo: ATCO Properties 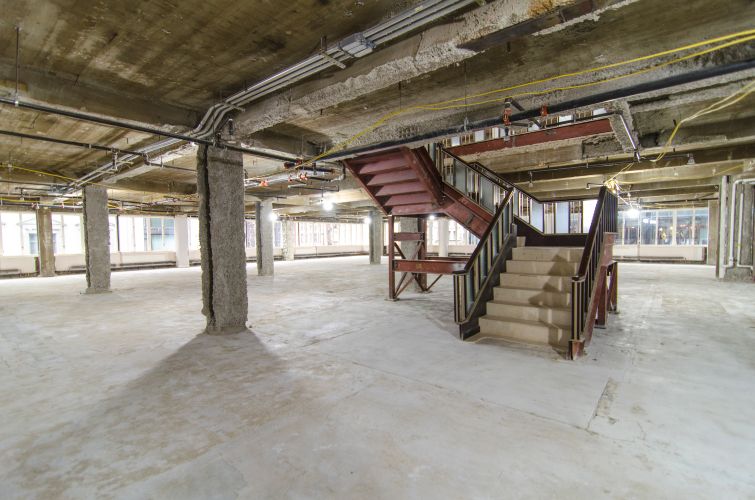 A look at the gutted fourth floor of 555 Fifth Ave. Photo: ATCO Properties 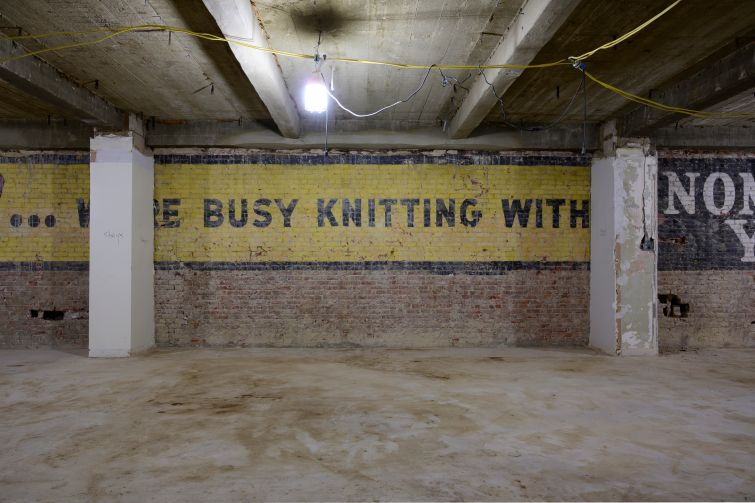 The signs predate 555 Fifth because they were painted on the exterior wall of the adjacent building, which was built in 1939. Rebecca Baird-Remba 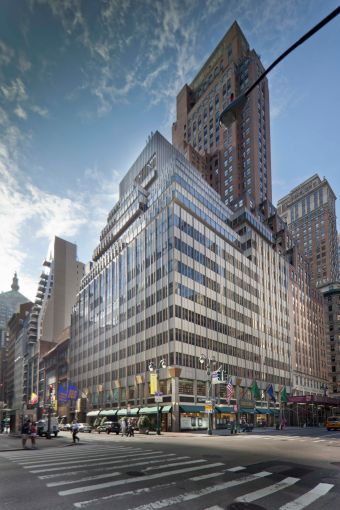 The exterior of 555 Fifth Avenue, which was built in 1955. Rebecca Baird-Remba 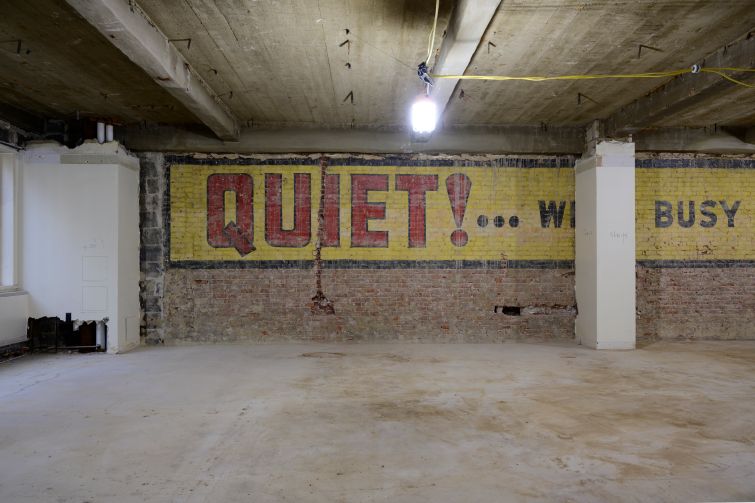 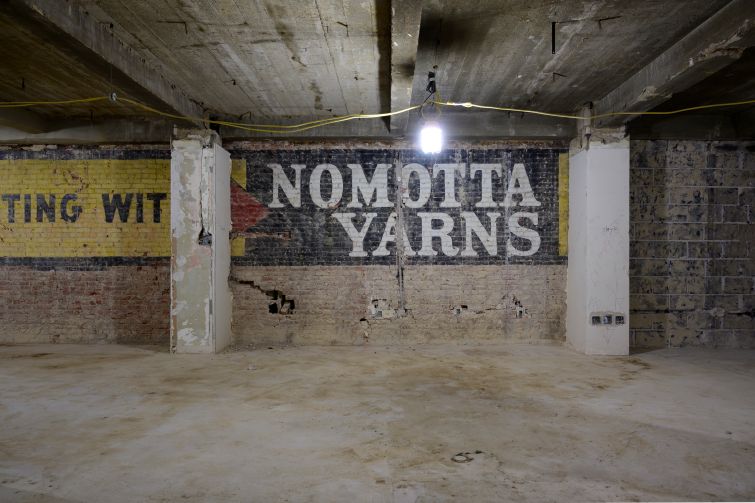 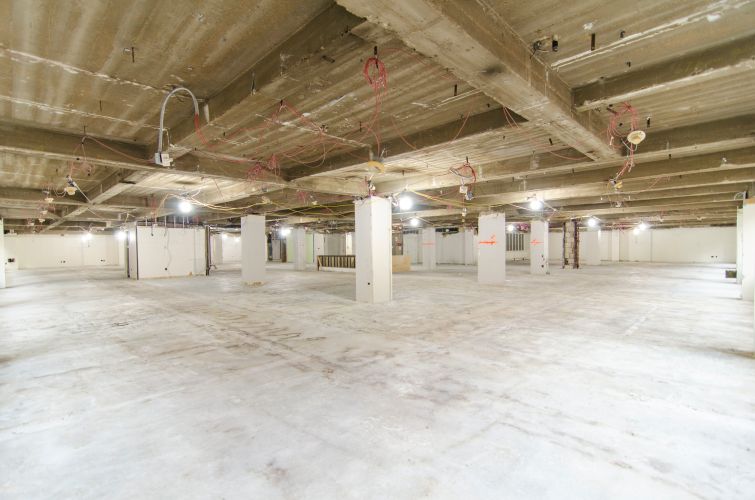 Workers were demolishing a wall at 555 Fifth Avenue in Midtown last summer when they uncovered a strip of bright yellow painted brick underneath decades of white drywall. Then they took off more drywall and discovered a 60-foot-long vintage advertisement painted directly on the brick.

“QUIET! … BIG REAL ESTATE DEAL GOING ON” it blared in all caps red and black letters, followed by “HERBERT CHARLES AND COMPANY, INC” in white type on a black background. That was on the fourth floor of the 20-story building between West 45th and West 46th Streets.

The landlord, ATCO Properties, decided to send workers to uncover the same wall on the fifth floor with similar results.

ATCO was the original developer of the building, which was constructed in 1955, but it has a family connection with the real estate company that commissioned the ads. The two co-founders of Herbert Charles & Co. were Herbert Fishbach and Charles Greenthal, the latter of whom went on to found property management company Charles H Greenthal & Co. Meanwhile Fishbach’s son John, a well-known music producer, married Dale Hemmerdinger’s sister, Carol Lyn Hemmerdinger, whose family now controls ATCO.

The wall in question is a party wall attached to the much smaller five-story office building next door, 4 East 46th Street. The little 30-foot-wide structure was built in 1939, and the ads were painted on what was then a street-facing wall.

“That sign was behind the wall for 60 years and no one knew,” said John Cinosky, the president of brokerage services for ATCO’s leasing arm. And it shouldn’t be too surprising that it wouldn’t be exposed during a normal renovation.

“Most of the time when you have a building that has a common party wall, there’s no reason when you demo a space to touch the exterior wall,” Cinosky explained. “You basically leave the plaster on, you just skim coat on top of it to make it nice and smooth.”

So, they had no idea what was underneath the plaster when a worker exposed a piece of the wall.

“We were concerned it was a big expense to pull the plaster off without damaging what was underneath,” said Rich Hiler, the president of Essential Design + Build, ATCO’s construction department. “We didn’t know the condition of what was underneath. We kind of had to take a leap of faith and decided to do it.”

Of course, ATCO expects the old-timey signage to be a draw for tenants. The landlord is hoping to find a tenant who wants to keep and help preserve the painted ads in their space.

“A lot of people in commercial spaces want to have an open look with exposed elements, and in some cases would pay to have murals put on walls, but this is the real thing,” Hiler noted. “It’s a real piece of history and an artifact to this building, at no cost.”

Besides the fourth and fifth floors, ATCO is gutting the 11th and 12th floors, renovating the lobby and adding a prebuilt office space on the 15th floor.