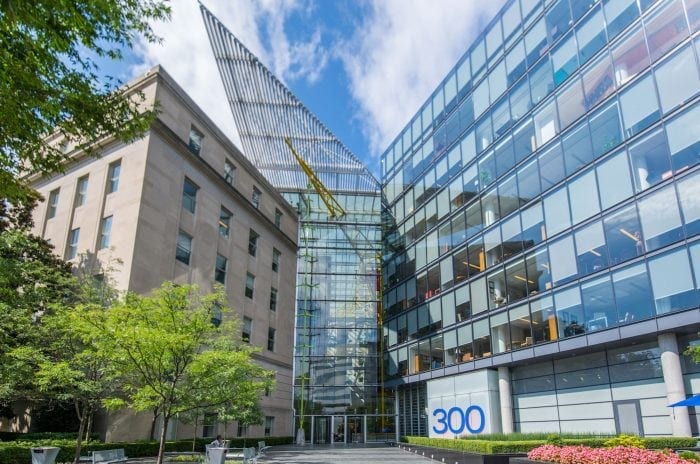 As it searches for a new permanent home, the Freedom Forum will temporarily move into 300 New Jersey Avenue NW in Washington, D.C., signing a 26,000-square-foot lease with The Business Roundtable, according to Savills, who represented the nonprofit in the lease.

The property is part of American Square, a two-building trophy complex that also consists of 51 Louisiana Avenue NW, and is a short distance from Freedom Forum’s current home in the Newseum at 555 Pennsylvania Avenue. NW.

“It’s a temporary home. We needed a space that was downtown, centrally located, where we could continue to host amazing programs about the First Amendment,” Jonathan Thompson, a spokesperson for Freedom Forum, told Commercial Observer.

The Newseum, which has been open since 2008, will be closing its doors later this year. The building is being sold to Johns Hopkins University in a $372.5 million deal, for use as an educational facility.

Freedom Forum plans to move to its temporary home during the first half of next year. Some of the artifacts it currently houses will go back to those people who loaned them to the museum, while other artifacts will be archived in storage. However, it will continue to offer programming and hold events from its new location.

“After we leave, public programing is going to still be an important part of what we do,” Thompson said. “This space has a lot of tech capabilities that will let us host those programs in D.C. and stream across the country and the world.”

The new lease will run through April 2022 while the company looks for a permanent location. The wish list for the new space includes museum space plus a room for the oversized First Amendment tablet that currently sits in the Newseum.

“The search for a new home is going to take quite some time,” Thompson said. “We have another three months here as we are open through Dec. 31. Then we will need to move to the new space and then we can really start the search.”

Most NYC Restaurants and Bars Couldn’t Pay Their July Rent