U.K. native Toby Dodd is taking the reins for Cushman & Wakefield’s Tri-State office. Commercial Observer finds out who he is. 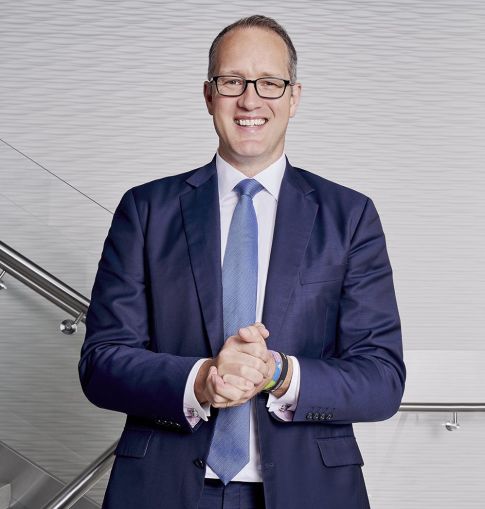 After 18 years at Cushman & Wakefield — and only three years in New York City — Toby Dodd was named the new president of the firm's New York tri-state region. STEPHANIE PRICE/ FOR COMMERICAL OBSERVER

Nearly 18 years to the day since Toby Dodd started in Cushman & Wakefield’s graduate program in London, the 42-year-old has graduated to a much bigger role in the company: heading up the firm’s New York tri-state region.

The England native was named the president of C&W’s tri-state region last month and will replace John Santora — who plans to transition to a more client-focused role in the firm’s Americas division — starting on January 1, 2020.

In his new post, the current executive managing director of Global Occupier Services will be responsible for overseeing C&W’s nearly 3,000-person offices in the tri-state region of New York, New Jersey and Connecticut and will report upward to Shawn Mobley, the CEO of the Americas.

“New York is just such an important part of our business,” Dodd said. “The opportunity to take on this role as president of the region — especially on the trajectory of growing this business — and the opportunity to work with [Santora] through this process continuing in the future was fantastic.”

“Also, New York is very much home for me,” added Dodd, who has worked for C&W in Vietnam, Hong Kong and Singapore, but recently made another big life move by becoming a father. “I now have a young son, so it’s going to be home for him as well.”

And, as his new boss Mobley tells it, Dodd has some pretty big shoes to fill. Santora is known to come into the firm’s Midtown offices at 6 a.m. and doesn’t get back home until about 8 p.m. He’s been with the company for 42 years, overseen major mergers for C&W and has held many leadership roles in the firm during his tenure.

“Nobody’s worked harder, done more and has probably given up their lives for this company,” Mobley said about Santora, who replaced Ron Lo Russo as president of the tri-state region in 2016. “He’s been on the front line for every major event.”

Those include the company going public in August 2018, which it debuted at $17 a share — valuing it at around $3.13 billion, as Commercial Observer previously reported. The stock dipped to $13.45 per share in December 2018 but has since bounced back and now hovers in the $17 range.

Even with 400 offices spread out across 70 countries, New York City remains a vital market for the firm, Mobley said. The company was ranked as the top investment sales firm in the city last year — beating out heavyweights like CBRE and Eastdil Secured — with $16.49 billion in dollar volume and 196 closed deals, The Real Deal reported. Because of this, Mobley considers heading operations in the region one of the top posts at C&W and a “very demanding job.”

“There are very few positions that are as visible,” said Mobley. “As New York goes, so goes your brand.”

It’s not just the long hours and after-work obligations that can make it a stressful post, it’s also making sure the thousands of people working in the region are firing on all cylinders, Santora said.

“The challenge is always to keep everybody engaged, make sure you have the right talent and upgrade your talent,” he said. “When you have that many people it keeps you up at night thinking about what everybody’s doing, making sure everybody’s doing their job and motivating them all.”

The firm embarked on a year-long process to seek out the next person for the gig after Santora decided he wanted to step down to focus more on clients and spend more time with his family, including his three grandchildren.

“I wanted to get us to a place where, when it was time for succession, that we did it without any rush, that we had time to pick the right person,” said Santora. “We engaged a search firm, went through internal candidates, external candidates and did all the things you would expect to make sure we covered the market … and we made the right choice.”

Dodd grew up in the small town of Exeter in southwest England — where his parents and sister still live — and went to the same school for 10 years. He left Exeter when he was 20 to go to the University of Bristol, where he studied valuation and estate management.

He got the real estate bug after talking to some friend’s parents who worked in the field. But the “pivotal” moment that solidified his career path was doing internships with several firms while at university, especially C&W. After that, it was an easy choice to join the firm’s graduate program in 2001.

“I was offered to work for a number of different firms in their graduate programs, and all the graduate programs are good, but for me, it was about the people,” Dodd said. “I wanted to go back and work specifically for those people at the time, and that’s what drove me to the firm.”

Dodd started with corporate occupier services in C&W’s London offices, staying until 2004 before relocating to Hong Kong to manage real estate accounts for companies like Nokia, BP and the Thomson Corporation.

“My father grew up in Northern Rhodesia, so listening to all these stories of growing up there, the experience he had as a schoolboy, as a police officer, was sort of what sparked the imagination for having an adventure,” he said. “I realized working for Cushman & Wakefield in Europe that provided me the opportunity, whether it was continental Europe or going somewhere else.”

He later worked in Singapore and Shanghai before he was tapped to start C&W’s Vietnam office, which he got the business license for on Christmas Day in 2007. Dodd remained in Vietnam until 2011, when he relocated back to Singapore as a managing director.

During that time Dodd got his master’s degree from the University of Chicago Booth School of Business with a concentration in strategy and met his wife, Julie, through mutual friends while on a business trip in Hong Kong, where she was living at the time. The pair dated long-distance for a bit — regularly traveling the three-and-a-half-hour flight between countries to see each other — before getting married in 2015.

The couple wanted to relocate to be closer to family — Dodd’s in the United Kingdom and his wife’s in the U.S. — and decided New York would be the perfect place, later buying a place in Chelsea. Dodd left Singapore in 2016 to head up C&W’s Global Occupier Services division, where he develops and implements strategies for more than 100 of C&W’s largest occupier clients in the tri-state, mid-Atlantic and New England regions.

“[It’s] providing them with the full range of services for their full life cycle of their real estate needs, whether that’s office, whether it’s retail, whether it’s industrial,” he said. “Those are clients based out of New York, but their portfolios obviously span across the country and globally.”

Both Mobley and Santora said they knew Dodd was the right choice to head up the tri-state region because of his loyalty to the firm and his experience working with companies all over the world.

“For his age, you will find few professionals in our company or in the industry with really the global background and experience that Toby has,” Mobley said.

“Toby has had international experience and leadership roles around the world,” Bruce Mosler, the chairman of global brokerage for C&W, said in a statement. “That, coupled with his client-first approach of being on the front lines, he has the perfect insight into the needs of our clients as well as how to provide leadership to our people.”

Santora added that Mobley is already well-liked and respected by the New York staff.

“The comfort levels he has with our professional here and the relationship that he’s built —  arguably, to a New Yorker, in a very short period of time in three years — but he’s well-known, well-liked and supported across the board,” he said. “That’s a big part of it.”

And it’s not just C&W’s New York office that has welcomed Dodd, but some of the wider business community as well. Kathryn Wylde, the president and CEO of the business organization the Partnership for New York City, said Dodd “fits in beautifully” in the city.

In August, the group selected to join Dodd to join its year-long leadership program targeted at “rising stars in the business community” to show them how the city works and introduce them to commissioners of city agencies, Wylde said.

“It’s the wide range of his experience in communities around the world and the fact that he understands the forces at play in urban centers in a global economy” that makes him a good fit in the program, Wylde said. “They excite him. They don’t scare him, unlike many of our elected officials.”

Dodd said he hasn’t fully developed his strategic goals for when he takes over for Santora, but his main focus will be on the people in the office and the firm’s clients.

“For our occupier, our investor clients it’s like what is top of mind for them,” Dodd said. “They’re continuing to demand more complex solutions to more complex problems, and so for us how do we continue to provide those services.”

Dodd wants to continue to grow C&W’s business in the region and doesn’t seem too stressed about the weight of maintaining the brand’s legacy and relevance in the New York market.

“There’s a lot of responsibility that comes with this,” said Dodd. “What I’m really pleased about is just having that support, having John here as a mentor and advisor not only through the initial process but into the future. That’s going to be absolutely important.”

Santora, who has known Dodd for nearly a decade, said he’ll be there along the way to make sure Dodd’s transition is as smooth as possible.

Throughout all of Dodd’s different homes and countries, he has never strayed from C&W. Which leads to the question he answers the most when interns or new recruits meet him: Why just one company?

“Because within one company there are so many opportunities, you’ve just got to go and seize them,” he said. “I’ve always said to people if you raise your hand and volunteer — whether it’s client work, whether it’s cultural work, whether it’s community work — that will really set you on a great path within any good firm.”