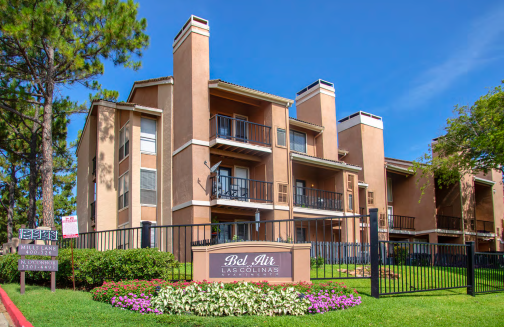 Western Wealth Capital has gotten $56 million in senior debt from CIT Bank to fund the purchase and renovation of Bel Air Las Colinas Apartments, a garden-style apartment complex in Irving, Texas, according to information from CIT.

Vancouver, B.C.-based Western Wealth purchased the 28-building, 515-unit community with plans to revamp the interiors of the three-story buildings as well as the exteriors and the other sections of the property, including the area housing the swimming pool. It will also remodel the clubhouse and upgrade and “enhance” the property’s landscaping.

Western Wealth, which also has an office in Tempe, Ariz., aims to strategically buy and reposition underperforming, or distressed, multifamily assets across the U.S., aiming at a three- to five-year investment timeline from acquisition to sale, according to its website. Officials at Western Wealth declined to comment on the transaction.

The firm champions a “WWC 30-day Transformation” strategy that begins on the first day with immediate capital improvements, such as building and infrastructure upgrades and new amenities to quickly “improve the resident experience and command additional rental income,” as per its website.

The Irving, Texas, complex — currently operated by CAF Management — is located at 3701 North O’Connor Road in Irving, a suburb of Dallas situated about a 20-minute drive from its downtown area. The property features a duck pond, courtyards, covered surface parking, multiple swimming pools, a covered outdoor kitchen area, a fitness center, a cyber cafe and business center and laundry facilities.

It sports one- and two-bedroom units, with current monthly rents ranging from just over $1,000 for one-bedrooms to just under $1,700 for the two-bedroom apartments, according to the property’s website.

In the second quarter, the Dallas-Fort Worth area experienced its highest ever level of net absorption of multifamily units — at 11,500 — further accelerating the area’s occupancy to 95.1 percent, according to a market report from brokerage CBRE. It said the second quarter marked the first time in almost three years that demand had exceeded supply in the area, but with that, construction starts fell below deliveries on the year in June, signaling that the pipeline in the Dallas area is beginning to shrink.

The firm attributed the increase in multifamily demand to a continued surge in employment, with around 120,000 jobs added year over year from June 2018 — outpaced by only New York City, which saw around 124,000 jobs added over the same period.

North and South Irving, specifically, registered 94.1 and 96.5 percent occupancy rates in the second quarter, respectively, while its year-on-year rent growth came in at 2.7 and 3.8 percent.